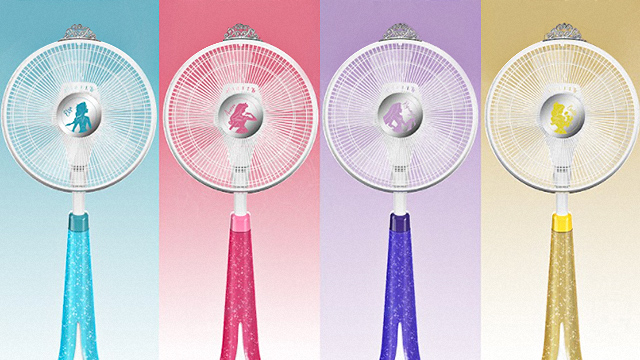 Complete with a little tiara on top of each fan.

(SPOT.ph) In mid-2020, Asahi released a line of #aesthetic home appliances—including an electric fan and waffle maker—and their collection of white-and-wood electronics quickly went viral, coming right around the time the Internet was discovering the joys of home improvement. They followed it up about a year later with the Disney Appliance Collection, which featured the same minimalist design elements from its predecessor, but with illustrations of none other than Mickey Mouse. Now, they're offering even more appliances for anyone who loves the characters from the Magic Kingdom: Asahi is releasing a Disney Princess Collection on September 18!

While their previous Internet-famous electronics were composed of a variety of appliances, they’re limiting the Disney Princess line to just electric fans—at least for now. The collection includes four standing electric fans, each inspired by some of the most popular Disney princesses, namely Elsa from Frozen, Aurora from Sleeping Beauty, Rapunzel from Tangled, and Belle from Beauty and the Beast. Each fan features a white shade on the motor and blades up top while the base sports the color that each princess is associated with—blue for Elsa, pink for Aurora, purple for Rapunzel, and yellow for Belle. The finishing touch? A pretty little tiara on top.

Take a look at the electric fans in Asahi's Disney Princess Collection:

Shopping Staying In Savvy Adventurer Seasoned Online Shopping Asahi Electric Fan Topspot Shopping Disney Disney Princess
Your Guide to Thriving in This Strange New World
Staying
In? What to watch, what to eat, and where to shop from home
OR
Heading
Out? What you need to know to stay safe when heading out