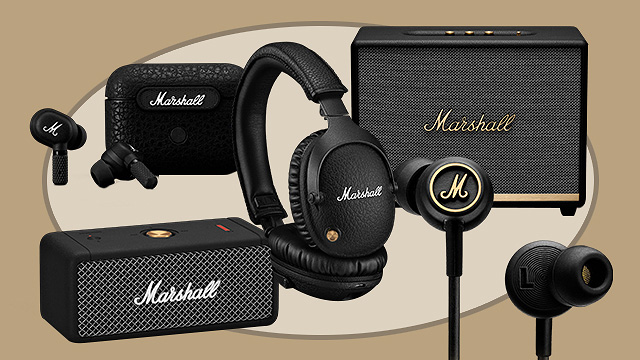 Best of Marshall: The Headphones, Speakers, Earbuds + More You Should Buy

The brand has been around since the 1960s.

(SPOT.ph) Before Marshall was the legendary audio-device brand it is known as today, it was a music-equipment store called Jim Marshall and Son located on Uxbridge Road in London. In the early 1960s, the shop was a hip spot for young rock musicians and enthusiasts as the genre gained more and more popularity. By 1962, the Marshalls had built their first-ever amplifier, the original JTM45 now known as "Number One." It was made specifically for musicians who frequented the store, but were dissatisfied with the tone that amps available at the time produced. Twenty-three orders for the device were placed on its first day of release.

In the years that followed, the Marshalls opened a second shop on Uxbridge as well as a dedicated factory and by 1965, they had created the Marshall Stack amplifier—two stacked 4x12 speaker cabinets created when guitarist Pete Townshend (of The Who fame) demanded the amplifiers’ sound be louder and have a bigger stage presence. However, it was in 1966 when Marshall became a worldwide phenomenon.

That year, a drummer and former student of the older Marshall’s named Mitch Mitchell put the businessman in contact with a musician he had begun working with at the time—a then-unknown American guitarist who partially shared Marshall’s name. That man was James Marshall Hendrix—yes, that Jimi Hendrix. Hendrix discovered Marshall amplifiers at an early London gig and he asked Mitchell to introduce him to the man behind the devices. At their initial meeting, Hendrix bought four speaker cabinets and three 100-watt Super Lead amplifiers and this was the equipment that was used during the Experience’s first tour. The rest is pretty much history.

Today, Marshall carries on its legacy as a powerhouse in the music world with a wide range of audio devices—not just amps—that deliver the kind of rich, heart-thumping sound that demands you turn the volume up. While Marshall amplifiers continue to be a popular choice for musicians and live performers, the brand has taken their signature sound to personal audio devices and over the years, they’ve grown their lineup to include headphones, wireless earbuds, Bluetooth speakers, and more. If you’re curious about which devices they’ve got in their catalog—and more importantly, which are available in Manila and worth the splurge, this list is for you. We picked out the best device in every category to help you narrow down your search.

These are the best Marshall headphones, speakers, earbuds, and more you can buy in Manila:

Marshall’s Monitor series is the brand’s flagship lineup, unsurprisingly boasting the best of what they have to offer as far as personal audio. Decked out in that signature textured black exterior, these robust over-ear Monitor II ANC headphones offer great quality both in terms of build and overall capability. The headphones’ claim-to-fame is their Active Noise-Cancellation technology, which is not only effective, but adjustable thanks to the easy-to-use ANC knob on one side of the headband. You also get dynamic, crystal-clear audio as well as that bass-thumping sound the brand is known for—but don’t worry, according to Sound Guys, the highs and mids should still come through nice and clean. Plus, the Monitor II promises well over a day of playback—up to 30 hours with ANC turned on and up to 45 without it.

What’s most impressive about the Major IV is its battery life—you can get up to 80 hours of nonstop playback—even 15 minutes of charging can already provide you a good 15 hours of use—and audio quality that rivals the likes of the Monitor II. The trade-off here is the Active Noise-Cancellation and the over-ear fit, but if you’re not willing to splurge in the five figures, you can’t go wrong with the sound, which is as rich and roaring as Marshall’s legend-status implies.

Even as Bluetooth takes over the audio game, wired earphones remain the preferred choice for many and Marshall’s versions are some of the best out there, both in terms of style and functionality. Our pick if you’re looking to buy a pair? The Mode EQ. The earphones are a couple of years old by now, but still a great option in 2022. They provide that signature Marshall sound minus the bulk or the exorbitant price tag. The earphones’ in-ear design promises a snug fit and immersive audio with bright highs and rich lows—the device is even built with an EQ toggle on the wire that lets you switch between more neutral audio and bass-heavy sound output, depending on how you like your tunes or what would work best for the song you’re currently listening to.

Now, while ANC is a popular technology, we should stress that you don’t have to have it in every pair of headphones or earphones you own. That being said, Marshall’s Mode II wireless earbuds—their first iteration of the technology—is a worthy pick if you’re looking to buy one of the brand’s three wireless-earbuds models. However, since it’s only a few hundred bucks away in price from the Motif ANC earbuds, we’d say go for the latter—you get that same sound quality with the added benefit of noise-cancellation and in our eyes, a more stylish design. The Motif ANC features a shorter but wider casing compared to the Mode II with earbuds in a similarly sized-down construction. The buds sport an in-ear design to facilitate noise cancellation and can go up to six hours of playback on a full charge, though that number goes down to 4.5 when Active Noise-Cancellation is turned on. Additionally, the charging case provides up to 20 hours of use with ANC and up to 26 when it’s turned off.

Before it shifted its focus to personal audio devices like headphones and speakers, Marshall was famous in the live music scene thanks to their range of powerful amplifiers. And with their Woburn II, which was released in 2018, the audio brand is staying true to its rockstar heritage with a speaker that’s not only ear-splittingly loud—TechRadar has noted that at full volume, the device may even be heard outside of a soundproof room—but also works to play music of any genre in crisp, dynamic audio quality. And even turned all the way up to max volume, the speaker delivers detail and clarity that lets instruments and vocals shine through, so everyone around can appreciate the music as intended.

Though a home speaker is a must for those who like to soundtrip on the daily, a portable speaker is for those who need quality audio everywhere they go—and the Emberton knows how to get the job done. Not only does it provide those signature rich tunes and powerful bass tones, it also delivers multi-directional sound that lets your fave songs blast at 360 degrees. It also has an IPx7 water-resistance rating, which means it can be safely submerged in water up to one meter deep for 30 minutes—you can use it at the beach or by the pool with no worries. Plus, the Bluetooth speaker boasts over 20 hours of playtime on a full charge, so you can soundtrip with your buddies all day long with no interruptions. And despite packing a punch in terms of specs and features, the device is small enough to hold in one hand—it weighs just 0.7 kilograms and measures 6.3 inches in length and under three inches in both height and thickness. Just throw it in your bag and you’re good to go.

Marshall is available on Lazada and Digital Walker’s website.