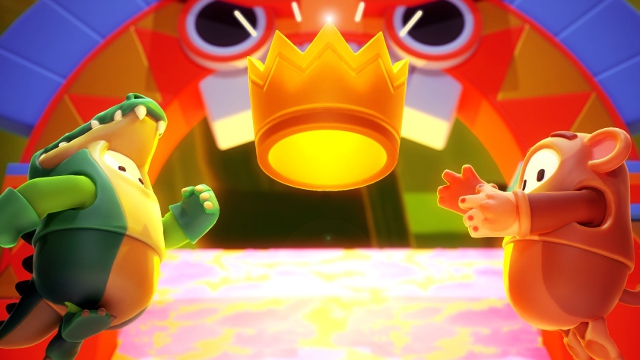 Reclaim the Crown: Fall Guys Will be Free Starting Next Month

Mark your calendars, get set, go!

Looking to head back to the more (seemingly) peaceful, wholesome days of the stay-at-home quarantine? Now’s your chance, as Fall Guys will be sold for free on PlayStation, Nintendo Switch, Xbox, and the Epic Games Store starting June 21.

Here’s everything we know about Fall Guys being free-to-play on the Epic Games Store:

Fall Guys is a battle royale-type game that grew popular over the pandemic, wherein you play as a jelly-bean shaped character who competes with up to 59 other players in a series of minigames that include obstacle courses, team sports, and lots of wipeouts. The goal is to be the last jelly bean left standing to claim the crown. Next month, you’ll be able to play Fall Guys for free on the PlayStation, Nintendo Switch, Xbox, and PC (via the Epic Games Store).

The free launch of Fall Guys also comes with cross-platform compatibilities, meaning you’ll be able to play with all your friends even if they’re playing on different consoles or devices. Is it finally time for the mouse-and-keyboard gang to show their dominance? Or will the controller players take the crown? Prove it to your friends starting June 21.

Epic Games is also launching an upgraded version of Fall Guys for the next-generation PlayStation 5, which will come with faster load times and enhanced performance.

Players who purchase and launch Fall Guys before June 21 will receive the Legacy Pack and the Season 1 Pass for free, as a thank you from Epic Games for supporting the game. The pack includes three costumes (namely, the Regal, Veggie Dog, and Feisty Dwarf costumes), as well as other cosmetics.

Additionally, if you pre-register to receive news on Fall Guys and its upcoming launch, your Epic Games account will be able to receive the selected rewards, including costumes, emotes, and patterns for your character. The rewards given out are dependent on how many players pre-register, so now’s the time to band together as a community to get those free goodies!

Finally, players who already purchased Fall Guys on the PC via Steam will still get to keep and launch their Fall Guys application from there. However, future players will no longer be able to purchase Fall Guys from Steam.