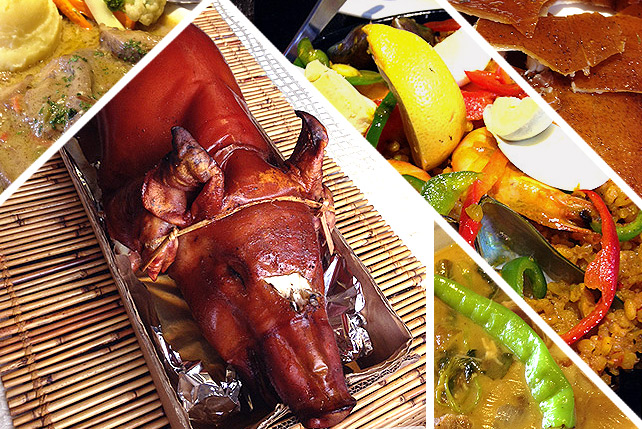 This Lechon is a Carnivore's Dream

The Undercover Eater's heart is beating fast over this roasted pig. 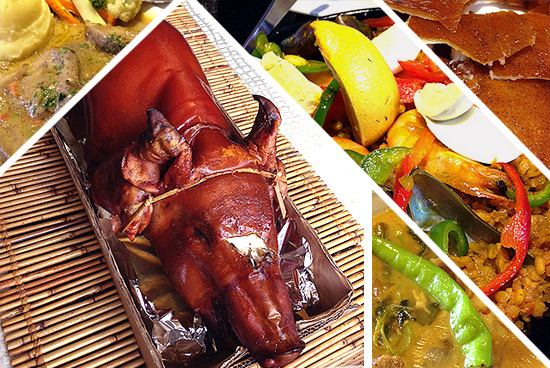 People seem to have this impression that since I write about food, I must love roasted pig. Well, that's a pretty precise assessment. An invitation to go north for lunch on a weekday is usually out of the question. However, the invite was for a "lechon tasting" at the Scout area newcomer Heirloom Kitchen (the owners of Leonardo's and Heirloom Kitchen are cousins), so I thought this was well worth traversing the always-hellish length of EDSA.

Scotch in hand, I watch as third-generation owner Leonard and his seasoned pit master unveil the Carnivore Lechon (P5,300 to P10,800)—their lechon Tagalog stuffed with a manly medley of sausages (Kielbasa, Hungarian, and Spanish chorizo), plus thick slices of bacon, potatoes, herbs, and garlic. This is not one of those daintily stuffed lechon de leches. The Carnivore Lechon is a behemoth large enough to satisfy a hungry crowd of 30 to 40.  You can opt for smaller pigs, of course, but today, Leonard wants to shock and wow. Mission accomplished. 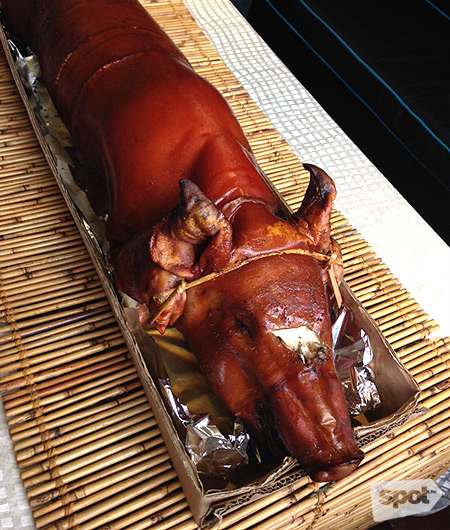 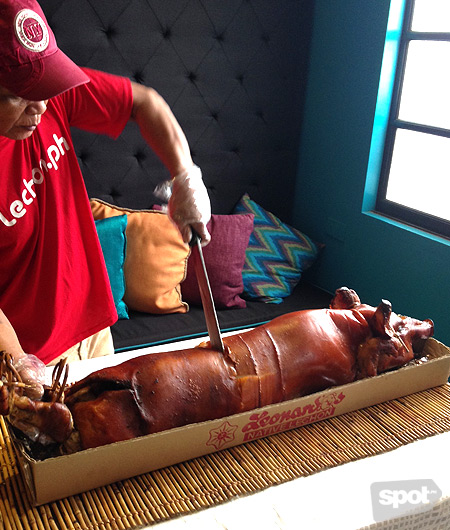 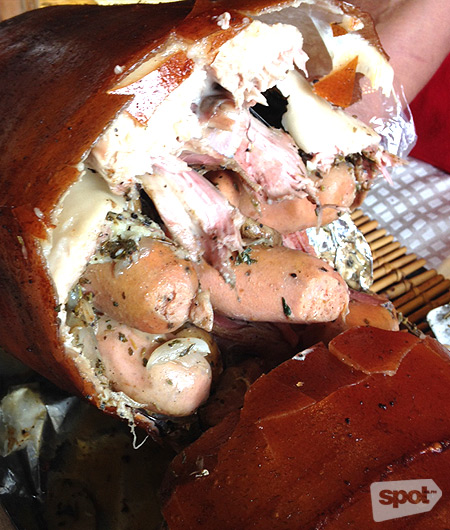 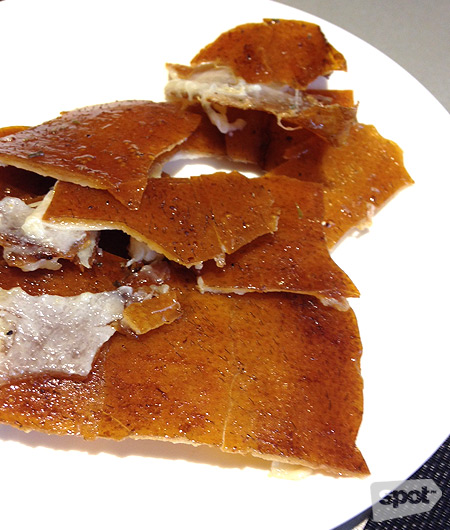 And, of course, the biggest sin

The crisp skin is served first while the pit master carves the meat. The glistening shards of golden goodness are nicely seasoned and crisp, making them all too edible. Blood pressure be damned, we mindlessly feasted on those cholesterol-bombs like they were carrot sticks.

The secret to their crispy skin and juicy meat lies in the pigs themselves. "We only use a specific breed of native pigs," Leonard shares. "We get them from the same farming community in Pangasinan that has been supplying Leonardo's ever since, when my dad was still the one managing [the business]." He further explains that the ratio of fat is vital in keeping the roasted skin crispy—too much fat makes for a greasy mess, while too little will render the skin too gummy for consumption. "Kukunat agad," Leonard warns.

As for the stuffing, it emits a glorious, smoky aroma upon release and imparts a robust and meaty flavor into the pork's flesh. I can imagine these stuffed pigs selling well during our local Oktoberfest season; both porky casing and stuffing will make for some tasty pulutan with your beer of choice. 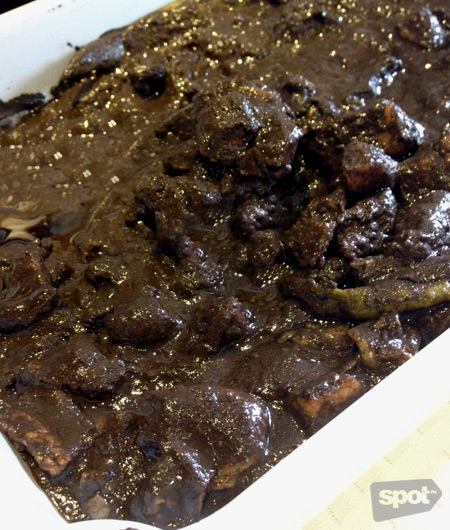 If you are not yet convinced about how delicious their lechon is, Leonardo's throws in free Dinuguan with all of their lechon orders. "We've been doing nose-to-tail since 1947," says Leonard with his dimply grin.

Aside from the lechon, Heirloom Kitchen's charming chef owner Erica Aquino also serves up some of their well-loved family recipes. A perk of being Leonard's cousin comes with a steady supply of lechon Tagalog, which Erica uses in their Sinigang na Lechon (P420). The tamarind broth is thick with gabi and is face-puckering sour—just the way I like it. Flavors and seasonings are on point; no condiments were required for this one. 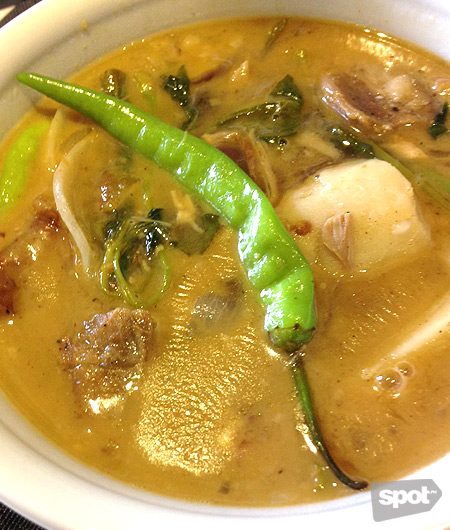 Another meaty standout is the Beef Lengua (P375) which has the comforting flavors of creamy mushroom sauce to enhance the mildly gamey tenderized ox tongue. Served with either mashed potatoes or rice, this is a satisfying and homey rendition which would bring back fond memories of Lola's cooking. 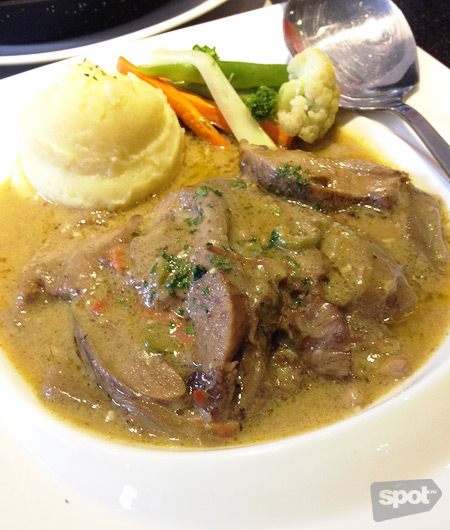 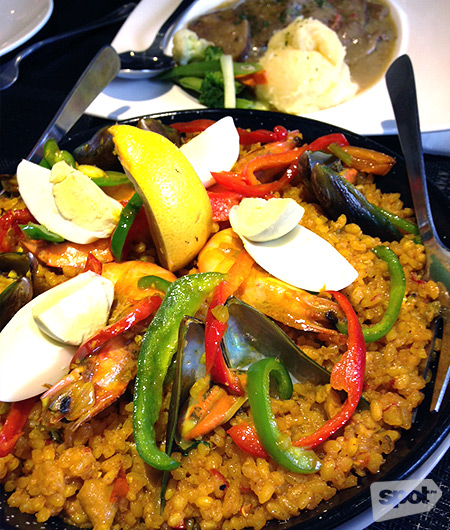 When I find myself in the area, I look forward to having more of their Paella Valenciana (P325/olo, P550/family) which is teeming with chicken, pork, and seafood highlighted by a healthy dose of socarrat (tutong). I would match this with their Callos (P220).

Leonardo's Lechon delivers everywhere in Metro Manila, and it is usually free of charge depending on the distance from their San Juan headquarters. Good to see family-run establishments thriving over the decades, and even better to see that they are in the good hands of capable and enthusiastic heirs. From the looks of it, Leonardo's is well on its way to serving up excellent lechon for 50 more years and beyond.

Lechon Carnivore Lechon Heirloom Kitchen Leonardo's
Your Guide to Thriving in This Strange New World
Staying
In? What to watch, what to eat, and where to shop from home
OR
Heading
Out? What you need to know to stay safe when heading out