Score literary steals and deals, laugh your heart out with Shrek, blast and be blasted with color at a fun run, and more. 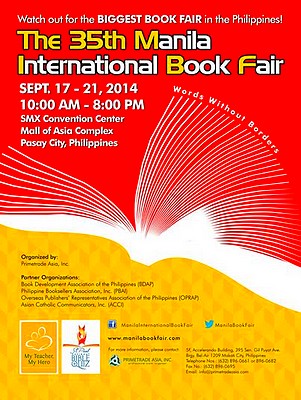 The country's biggest book event is right around the corner! The 35th Manila International Book Fair runs up to September 21 at the SMX Convention Center.

Now on its 35th year, the MIBF is the country's biggest and longest-running book fair. It showcases the largest and most varied collection of fiction bestsellers, textbooks, graphic novels, and educational materials, which will all be on sale at the event. The MIBF is also the go-to venue for this year's most awaited book launches and signings, dialogues with readers, contests, and other literary events.

After three decades, it has evolved from an event for the publishing industry and the academe to one of the most-awaited exhibitions for all sorts of readers. Bookworms of all ages come together to celebrate the joys of reading. It has also been the venue for ideas to be exchanged among publishing and academic professionals. 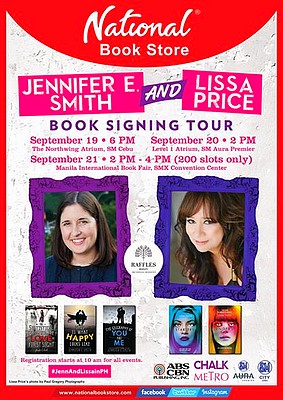 Get up close and personal with your favorite authors at the Jennifer E. Smith and Lissa Price Book Signing Tour, happening on September 20, 2 p.m. at SM Aura Premier and September 21, 2 p.m. at the 35th Manila International Book Fair, SMX Convention Center.

Jennifer E. Smith is the author of The Geography of You and Me, This is What Happy Looks Like, The Statistical Probability of Love at First Sight, The Storm Makers, You are Here, and The Comeback Season. She earned a master's degree in creative writing from the University of St. Andrews in Scotland. Her work has been translated into 29 languages.

Lissa Price's debut novel Starters is an international bestseller, published in over thirty countries. Dean Koontz called this YA futuristic thriller "a smart, swift, inventive, altogether gripping story." Starters appeared on many best-of lists and won top awards in the Netherlands, Germany, and France. Set in a futuristic Los Angeles, the series asks the question: Would you rent out your body to a senior so they could be young again? 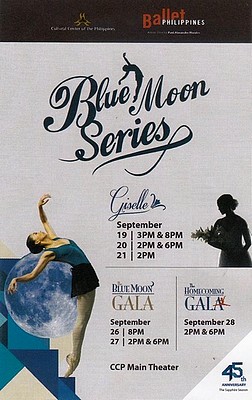 Giselle will return to the stage this weekend! Catch it at the CCP Main Theater on the following dates:

Giselle, one of ballet's greatest, is a classical romantic tragedy of loss, forgiveness, and love beyond death. Her story is a familiar one: two men are in love with her, but she chooses to surrender her heart to Albrecht, the suave newcomer who, as Giselle later finds out, is engaged to be married. Re-staged by Nonoy Froilan, the Philippines' premier danseur, Giselle starts off the Blue Moon Series, a two-week mini festival celebrating the Ballet Company's sapphire milestone. Fresh from their recently-concluded performances in Australia are guest artists from the American Ballet Theater: Soloist Stella Abrera and Principal Dancer James Whiteside, essaying the roles of Giselle and Albrecht, respectively.

Spend the weekend with your family and watch Shrek the Musical, opening on September 19, 8 p.m. at the Meralco Theater. The show runs through October 12.

Featuring all new songs, as well as the popular Shrek anthem, "I'm a Believer," Shrek the Musical brings the well-loved characters to life in a hilarious and spectacular production based on William Steig's book and the Oscar-winning DreamWorks animated film. The play debuted on Broadway in December 2008 and was followed by a revamped production in London's West End in 2011. Shrek the Musical was initiated when Sam Mendes, a big fan of the first Shrek film, suggested the idea of creating a musical to DreamWorks Animation's Jeffrey Katzenberg around the time the second film was in production. 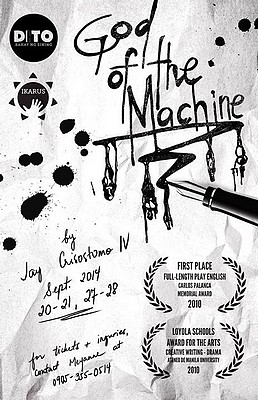 Writers are strange monsters. They dote on fictions and battle imaginary problems, yet they bleed for every word. In their self-made tragedies, they suffer a cold colder than ice, pain more substantial than anything the real world could inflict. Jay Crisostomo’s play tackles just that: the writer’s plight. This September, watch the writer’s suffering and redemption. Witness the God of the Machine in full splendor and filth.

Tickets are priced at P250. 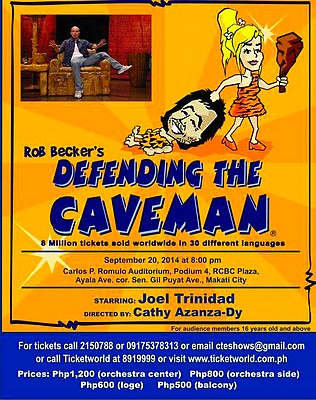 Don’t miss Robert Becker’s Defending the Caveman, onstage for one night only on September 20, 8 p.m. at the Carlos P. Romulo Auditorium in RCBC Plaza.

Audience members are sure to roar with laughter when they watch this stand-up comedy show. With hilarious insights on contemporary feminism, masculine sensitivity, and the erogenous zones, the show mines common themes in relationships that go straight to the funny bone while warming the heart. Defending the Caveman makes us laugh at ourselves and about all the ways men and women fight, laugh, and love. 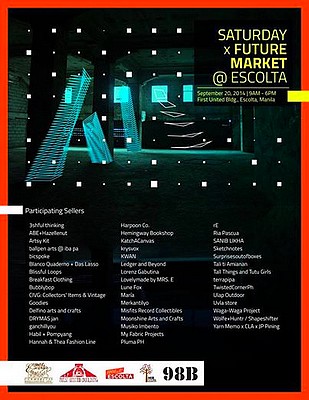 Shop for vintage and limited edition items at the Saturday X Future Market @ Escolta on September 20, 9 a.m. at the First United Building in Escolta.

Creative meets vintage! Imagine artworks and antiques all housed in one charming relic from our past! The place to find these treasures is at the former location of the Berg's Department Store. If you love artist-made merchandise, DIY stuff, independent labels, limited-edition handmade crafts, and works of art, this is for you!

Saturday Future Market @ Escolta is the latest offering of 98B COLLABoratory in partnership with the First United Building (FUB) and the Escolta Commercial Association (ECAI). It is a bazaar, garage sale, thrift shop, black market, and meeting place all in one. Artists, craft makers, and designers will be selling artworks, limited edition shirts, hand-made clothes, books, bags, jewelry, accessories, toys, CDs, stickers, and other one-of-a-kind merchandise. 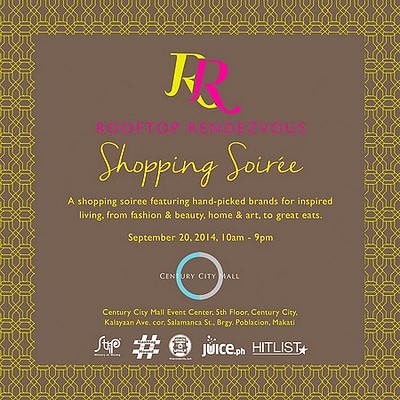 Shop ’til you drop at the Rooftop Rendezvous Shopping Soiree on September 20, 10 a.m. at the Century City Mall Event Center. Find some early holiday presents among their collection of items ranging from fashion and beauty, home and art, music, and great eats. The trunk show features local designers, artists, and sustainable brands. 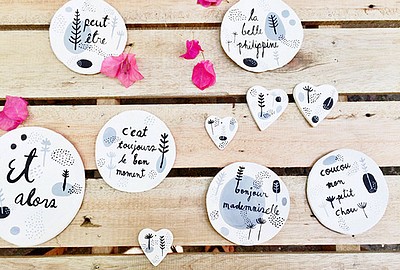 Discover a new craft at the Slab Pottery Workshop: Decorative Plates and Tags, happening on September 20, 9 a.m. at the Hey Kessy Studio in Quezon City. Play around with some air dry clay and make decorative plates and tags that you can paint and personalize. This slab clay workshop will be taught by Mansy Abesamis, and is suitable for adults and kids alike. The workshop fee is P1,800 and includes all materials, as well as drinks and snacks. 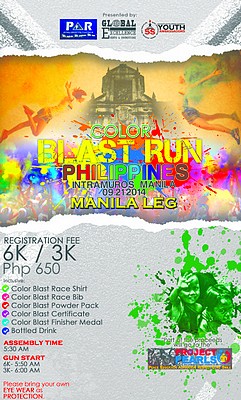 Registration is priced at P650 (3K or 5K). You may register at the following sites: