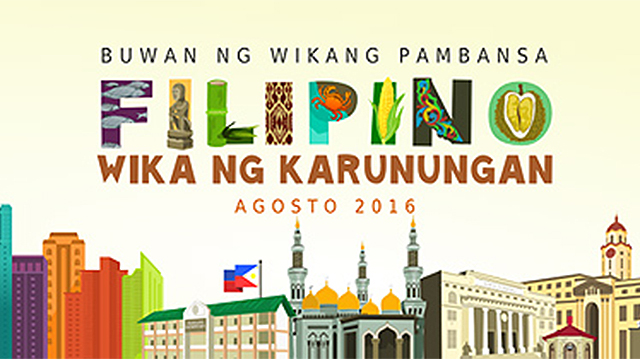 Most of them are free! 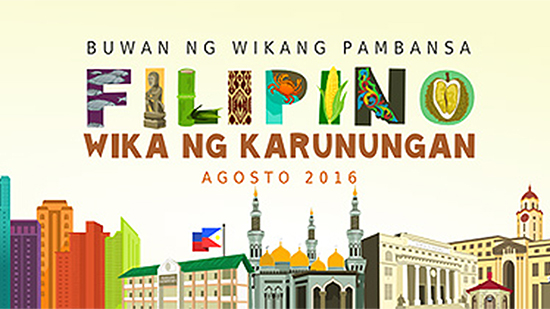 (SPOT.ph) National Language Month (a.k.a. Buwan ng Wika) is one of the much-awaited events especially in schools that implement the English Only Policy. Ironically, it's one of the rare opportunities we speak our own national language, Filipino, more often, and celebrate other Philippine languages, such as Ilocano, Bikol, and Kapampangan.

This year, we're not only enriching and promoting the language of our land but also advocating the use of Filipino at all times. The theme "Filipino: Wika Ng Karunungan" is also a response to the perception that English is the sole language that reflects high intellect and attainment of education.

Here are Buwan ng Wika events that support this advocacy. Best thing about these? They're mostly free! 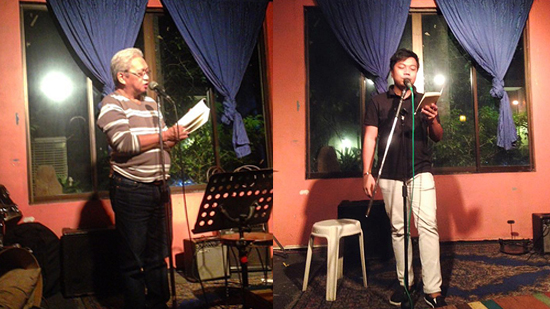 Poets of Linangan sa Imahen, Retorika, at Anyo, an organization of poets writing in Filipino and founded by National Artist for Literature Virgilio S. Almario (a.k.a. Rio Alma), will have a series of poetry readings in public spaces around Metro Manila every Saturday night for the whole month of August. This is part of the organization's efforts to introduce Filipino poems to more people. Venues include the underpass near the Manila City Hall (August 13), Eastwood City Walk (August 20), and Liwasang Bonifacio in Manila (August 27).

LIRA also invites everyone to LIRAhan: Atin ang Buwan, a night of poetry and music, on August 16, 8 p.m. at Conspiracy Bar and Garden Cafe. Featured performers are LIRA members, writing fellows of this year's LIRA Poetry Clinic, and other artists. 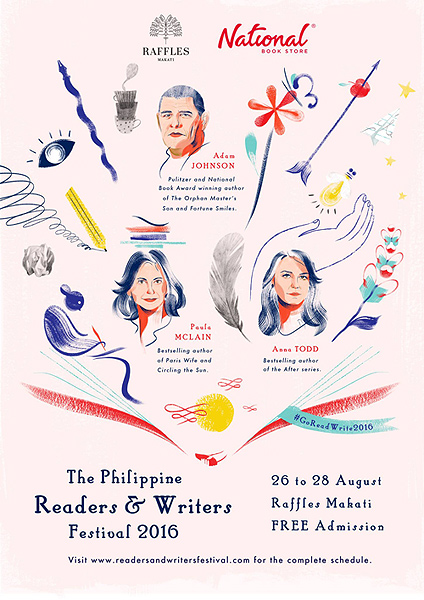 Lines of Flight: The Practice and Limits of Realism in Philippine Fiction

Filipino fiction writers Charlson Ong, Jaime An Lim, Dean Alfar, Luna Sicat Cleto, Gabriela Lee, and Eliza Victoria are in the spotlight at this year's Readers & Writers Festival by National Book Store. The Lines of Flight: The Practice and Limits of Realism in Philippine Fiction, a project of the University of the Philippines Press, is on August 26, 9:30 a.m. to 12 p.m. at Namayan Room, Raffles Makati.

Sentro ng Wikang Filipino, the Filipino language institution of the University of the Philippines-Diliman, holds a tarpaulin festival from August 16 to 31. Hakbang Kamalayan showcases posters and tarpaulins along the University of the Philippines Academic Oval that show important statements written in Filipino about various issues related to sexual orientation, expression, gender, and identity. The event is done in partnership with the Diliman Gender Office.

Admission is free. Walk-in registration is on a first come, first serve basis. UP Balay Kalinaw is at Guerrero corner Dagohoy Streets, University of the Philippines-Diliman, Quezon City. 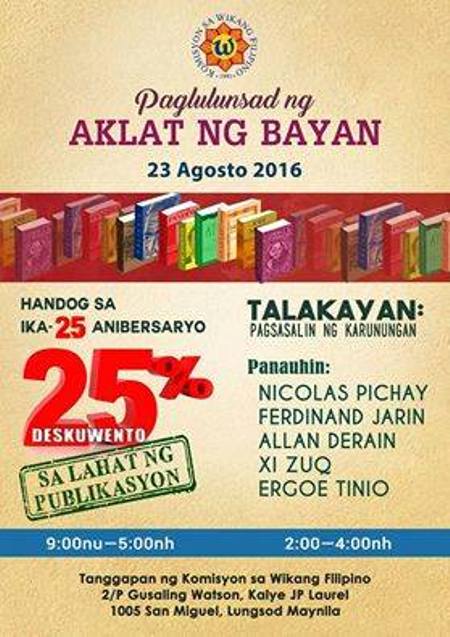 Komisyon sa Wikang Filipino, the government agency mandated to enrich, promote, and preserve the Filipino language, is giving 25% discount on all Aklat ng Bayan publications. The book sale is on August 23, 9 a.m. to 5 p.m. at the Komisyon sa Wikang Filipino (KWF) Office in the Malacañang Complex. Most of their books, especially the translated editions of well-loved classics, are only for P100 so imagine the great deal you'll get!

Learn a thing or two from language and translation experts Nicolas Pichay, a Palanca Hall of Famer; Ferdinand P. Jarin and Allan Derain, winners of the National Book Award in 2014; Michael Jude Tumamac, winner of Talaang Ginto: Makata ng Taon in 2015; and Ergoe Tinio, Palanca Awardee for children's story. Pagsasalin ng Karunungan is on August 23, 2 p.m. to 4 p.m. at the KWF Office. 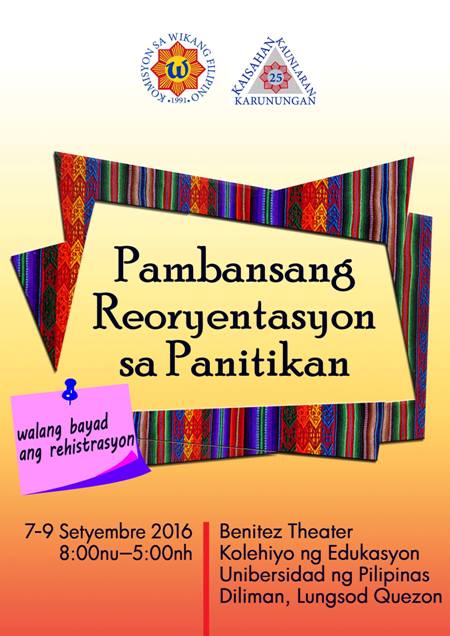 Teachers interested in stepping up their game are invited to a free seminar on how to teach Filipino literature on September 7 to 9, 8 a.m. to 5 p.m. at Benitez Theater in UP-Diliman. Pambansang Reoryentasyon sa Panitikan features forums and discussions on the importance of literature in education, current status of regional literature, and methodologies on teaching. Also scheduled are demonstrations on teaching epics, folk narratives, and Philippine literature in the regions.

Only 40 slots are open for the free seminar. To register, e-mail reacult@gmail.com. Benitez Theater is at the College of Education, University of the Philippines-Diliman, Quezon City. 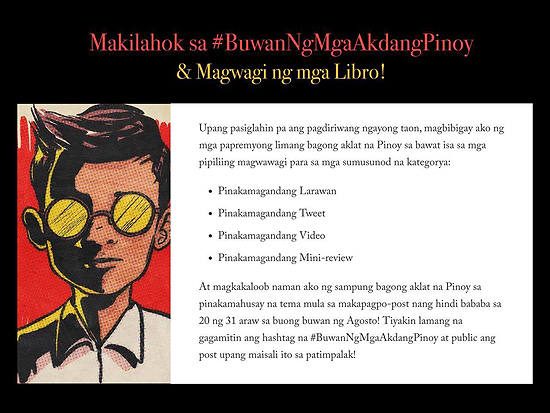 To support Filipino-made literary pieces, award-winning fictionist and poet Edgar Calabia Samar came up with a campaign called #BuwanNgMgaAkdangPinoy. It is open to the public and all you need is a photo, a tweet, or even a video that talks about your favorite book written by a Filipino author.