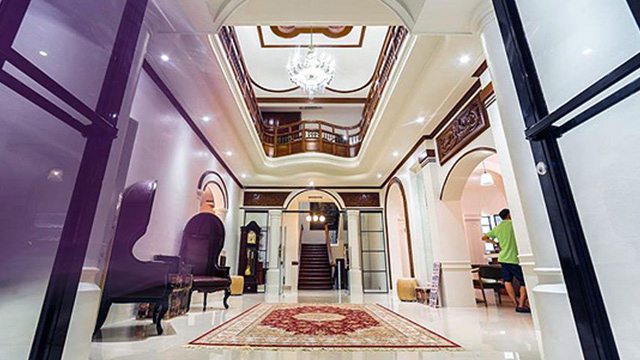 10 Ancestral Houses You Can Book for Your Next Getaway

These B&Bs, hostels, and boutique hotels will take you on a historic tour. 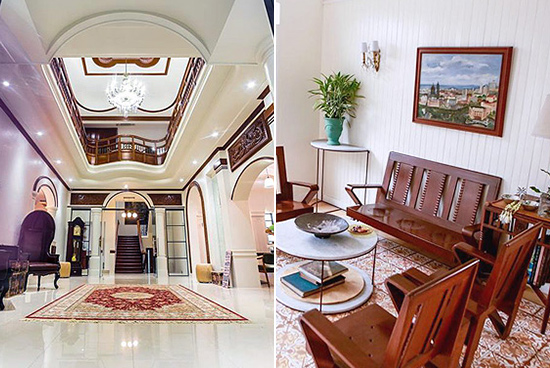 (SPOT.ph) Old houses usually get a bad rep for being run-down or haunted, but not everything old is useless and ugly, especially if it’s been preserved. There is such a thing called adaptive reuse in which a house or a building is repurposed, while keeping its original façade and interiors. Some old houses have been converted to restaurants and museums, but other owners have decided that their spaces should serve their original purpose—as abodes for the tired and weary—so they are turned into B&Bs, hostels, and boutique hotels.

Although this is more common in towns like Vigan, here are some examples closer to Manila. Check out some of these ancestral houses which have been welcoming guests to stay and experience the lifestyle of a time gone by. 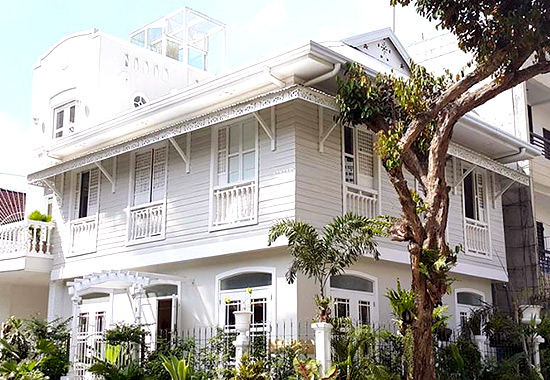 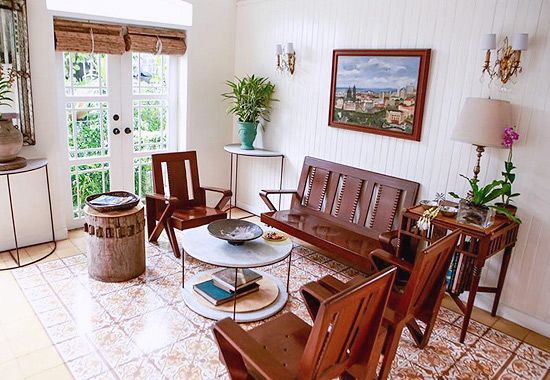 The house still has the American clapboard style on the walls and the sliding Capiz windows as well as an indoor patio. La Casita Mercedes now has eight rooms for guests that boasts antique furniture like four-poster beds. 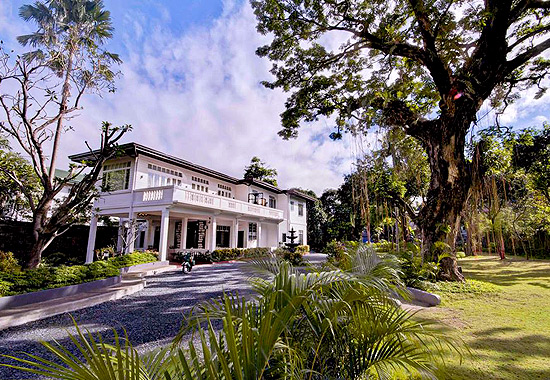 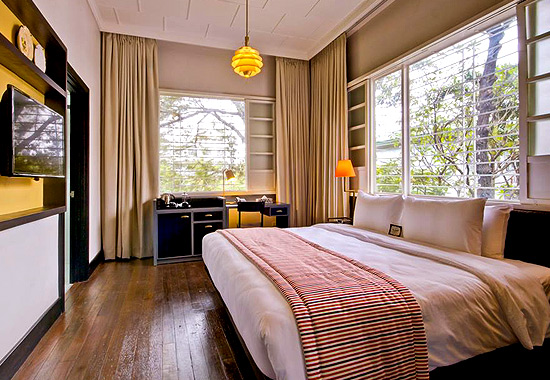 This boutique hotel was the ancestral home of a Filipino-Chinese entrepreneur and his extended family. The compound of over five houses from the late 1940s was preserved and converted into what we now know as The Henry Hotel. The garden leading to the houses was designed by renowned National Artist Ildefonso Santos. The 32-room hotel is also in the same compound as the Avellana Art Gallery and the atelier of fashion designer Jojie Lloren. 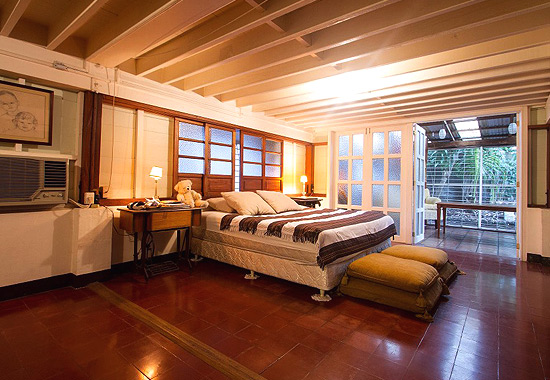 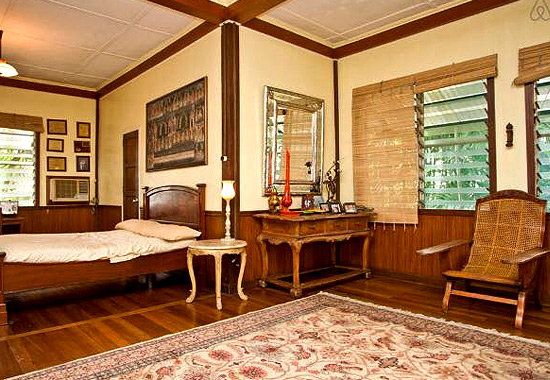 Built in 1947, the architectural design of Coco’s Garden Guest House was inspired by the American houses during that time. This charming house is decorated with antiques and other artworks. It also has huge windows and it even has the sliding covers of the usual Bahay na Bato. It is now owned by American tour guide Greg Dorris, who has been living in the Philippines since the ‘80s. He named the house after his pet dog Coco, a white askal who loves to eat coconut.

One interesting fact about this ancestral home is that this is the very place where American director Francis Ford Coppola stayed when he was filming the war movie Apocalypse Now. 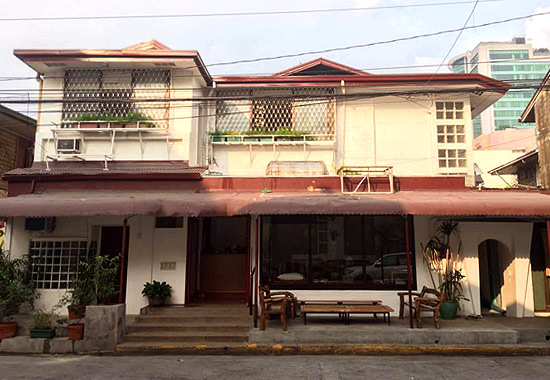 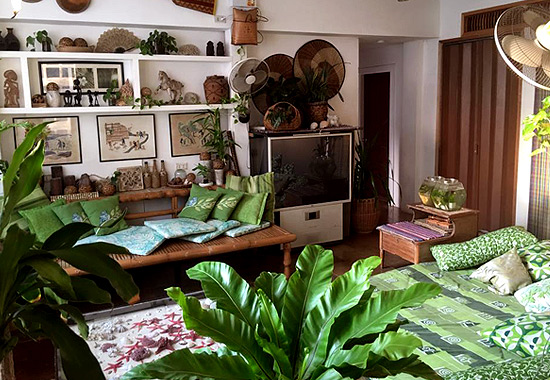 Located along Maria Orosa which was formerly known as Florida Street, this 1949 house was built right after the war and was originally owned by a certain Dr. Juico. It started out as a fashion house rented by a seamstress and it was called “FELY Maison.” Then it was repurposed to become a restaurant, an office, a model agency slash restaurant, a billiards joint, and a photo studio. It was in the ‘90s where the house saw its share of celebrities, one owner being the creative director for Preview magazine.

Now, it is a hostel with a bahay kubo feel that is slowly gaining popularity especially among foreign backpackers. The interiors, designed to look like a tropical resort, are a particular draw for guests who feel that they always come home to a resort, despite being in the center of a busy city.

Soon, other parts of the house will be converted into a tropical oasis with a dipping pool and hammocks surrounded by tropical foliage. 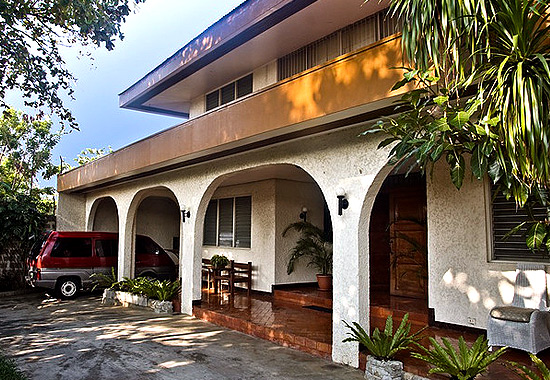 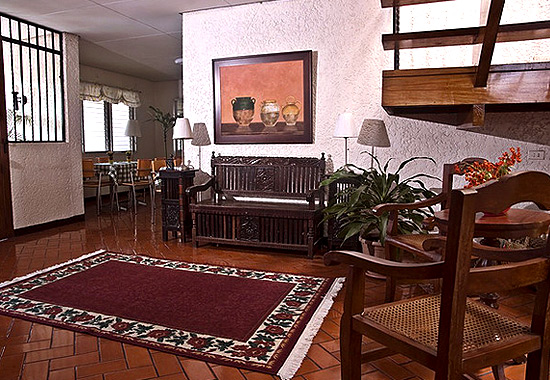 A cozy getaway in Parañaque, Casa Joaquin BnB was an opulent residence before it was refurbished into a lodging facility. This homey and spacious bed and breakfast has five bedrooms, each with its own private toilet and bath, and can accommodate two to five adults. Although it is conveniently located near the commercial center of Makati, Bonifacio Global City, Sucat, and Alabang, the place is still a quiet retreat that makes you feel like you’re away from the hustle and bustle of modern-day Manila. 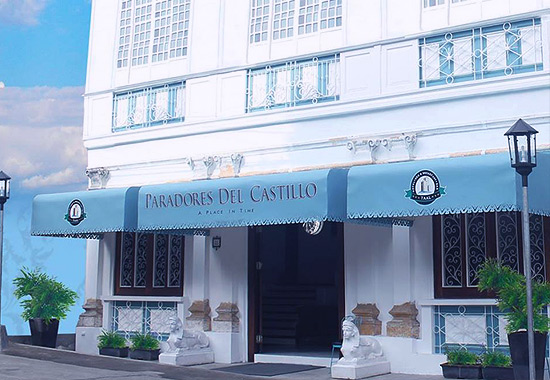 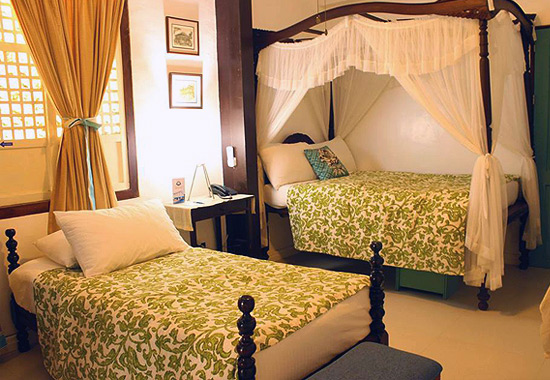 Built in the early 1900s, Paradores del Castillo was originally the house of Dr. Hermenegildo “Didong” del Castillo and his wife Leonor Inumerable Sanchez. The house-turned-bed and breakfast is just a few meters away from cultural attractions in Taal, such as the historic Casa Villavicencio, the Sta. Lucia Well, and San Lorenzo Ruiz steps to the Virgin of Caysasay Chuch.

The style of the house is a mix of Spanish, American, and Filipino designs which gives guests a glimpse of history within its interiors. Guests can also enjoy the garden and a panoramic view of the adjacent towns of Lemery, Calaca, Balayan Bay, the Pansipit River, and the Virgin of Caysasay Church. 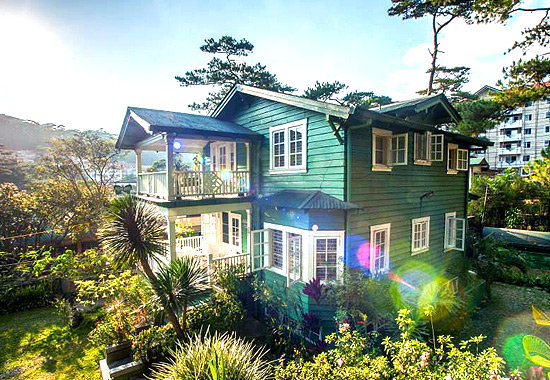 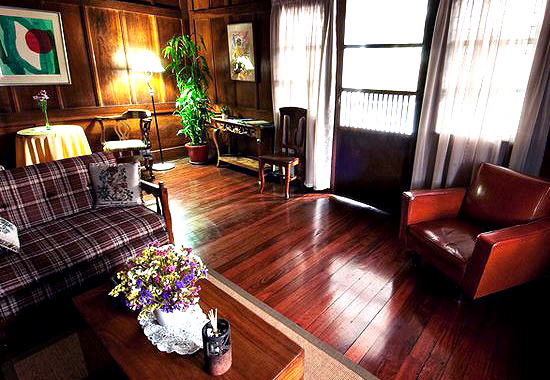 Peredo’s Housing Lodge dates back to 1915 when it was built by Japanese carpenters who were hired by an engineer named Rogue Peredo. He was known for being one of the builders of Kennon Road. The house is made of pinewood from the trees that grew in the lot. During the war, high-ranking Japanese soldiers who were stationed in Baguio occupied the house while the Peredo family hid in Bontoc.

One of the house's highlights is the dining table made of narra that can accommodate up to 12 people. Peredo's Lodging House is one of the oldest buildings in Baguio. It was declared a "Mahalagang Yamang Pangkalinangan" (Important Cultural Treasure) by the National Museum in December 2015. 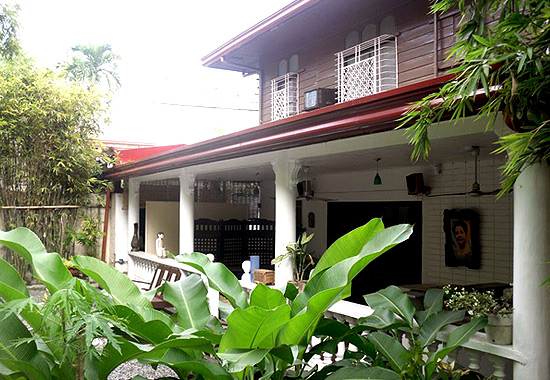 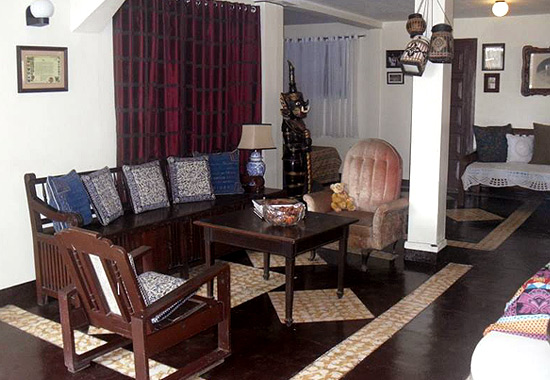 Casa Conchita, the ancestral home of the De Las Alas and Alcasid family, was named after Doña Conchita de las Alas Lualhati, the grandmother of singer Ogie Alcasid. This house was home to prominent people such as Magallanes councillor Tony Alcasid, and Doña Conchita herself was known in the fields of rural banking, civic leadership, and education in Taal.

It is now a bed and breakfast often rented for group getaways, with two double rooms and a family room which can accommodate up to 12 people. One of the best things about it is the spacious lot, which gives guests off-street parking and access for PWDs. 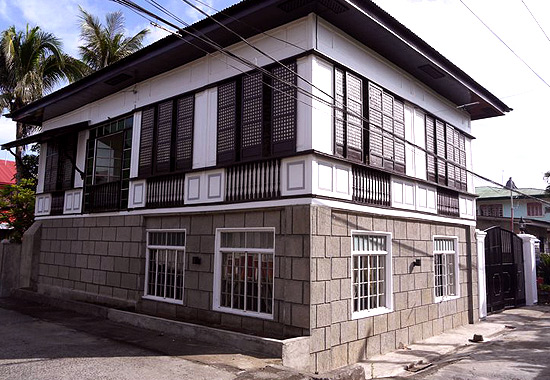 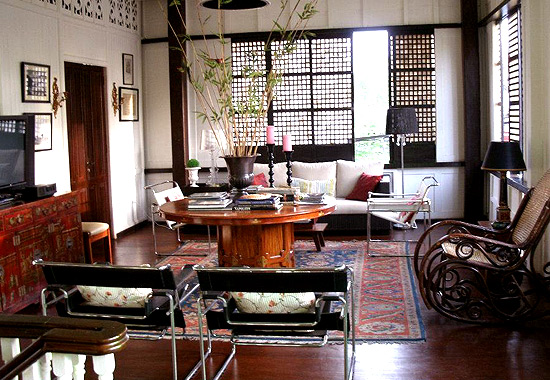 Can you believe that this ancestral house is almost 140 years old? Architect Robert Arambulo had to restore the house while being careful to retain its period vibe. It still looks like your traditional bahay na bato but with French-Asian design touches that were added during its restoration. This mix of different cultures can even be felt just by reading the names of their main suites namely the Paris, the Pondicherry, the Martinique, and the Hanoi suites. The house is a mix of East and West, old and new. 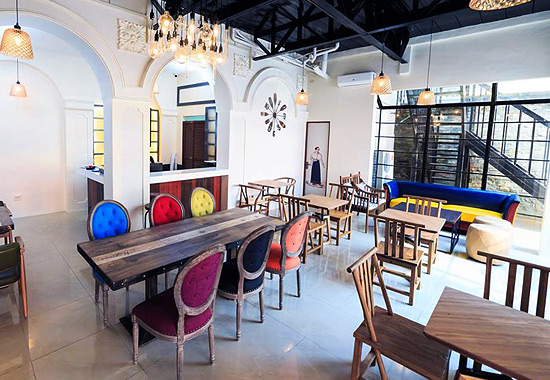 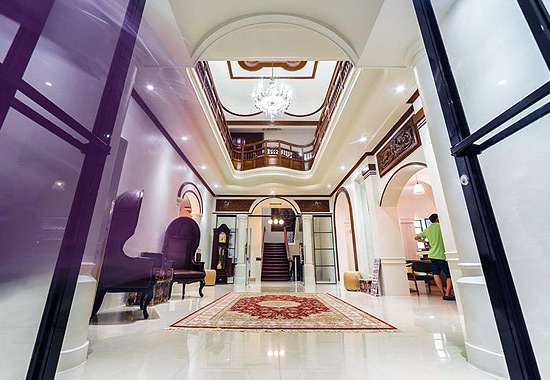 Mansions are known for its spacious rooms but this one is popular for its capsule bunk beds. Similar to capsule hostels in Japan and other parts of the world, Tambayan Capsule Hostel is cheaper than your usual hotel while still keeping a bit of Old Manila. Rates range from P629 to P2,129 per night. Manila’s cultural hotspots like Intramuros, National Museum, and Rizal Park are within walking distance.

Aside from capsules, they also have private group rooms for two to eight people. The interiors are adorned with designs that are distinctly Filipino, like paintings of a woman and a man in traditional garb on the door of their respective bathrooms, as well as framed photos of Old Manila hanging on the walls by the staircase.