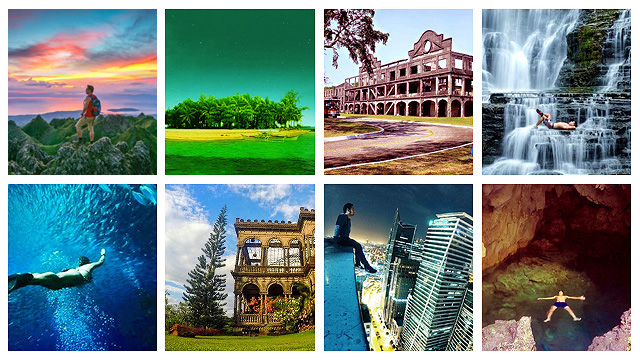 10 Instagram-Worthy Spots Around the Philippines

Get your phones ready! 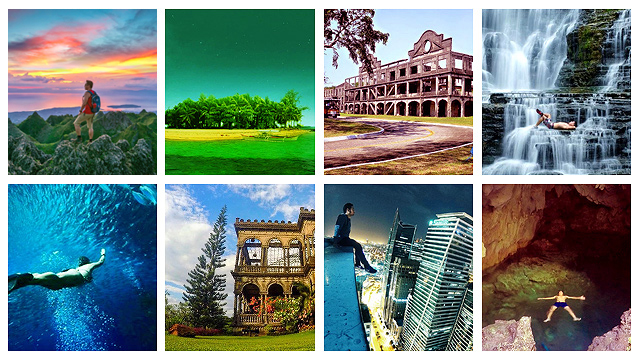 (SPOT.ph) The Philippines has a number of the most picture-perfect places, from the world-famous Manila Bay sunset to white-sand beaches that just scream paradise. Every out-of-town trip can easily be a prenuptial shoot, an unlimited selfie moment, or time to complete a whole album of wacky shots with friends and family.

It's hard to pick just 10 but here are some that have been tried and tested by the most intrepid Pinoy travelers we know.

Dive ta Bai, a group of freedivers based in Visayas and Mindanao, recently discovered a giant vortex of hundreds of thousands of sardines off the coast of Tangnan, Bohol. “The morning sun strikes them, and they shimmer. The silvery reflection creates a disco ball," narrated Julius Calvin Santos of Island Hopping Adventure Philippines. This sight isn't common and Bohol is probably the only other destination aside from South Africa and Moalboal, Cebu to have this phenomenon. To make sure that the sardines are safe, the local government declared Neptune Garden, the area surrounding the school of fish, as a marine sanctuary in 2014.

How to get there: Bohol can be reached by air through Tagbilaran Airport or by water through Tagbiliran City Pier. The cove where the sardines are found is accessible via Panglao Kalikasan Dive Resort, Alexis Cliff Dive Resort, and Molave Cove Dive Resort in Panglao. Get in touch with Dive ta Bai to experience swimming with the school of fish.

From afar, you can mistake the two-tiered Merloquet Falls for a white lace curtain draped over a canopy of trees. This sight is made possible by the jagged rocks and flat rock platforms of varying height. It takes two hours of travel from the city proper and another trek of almost 400 steps, but it's all worth it at the end of the trail.

How to get there: Zamboanga City has its own international airport. To get to Merloquet Falls, ride a bus or van bound for Vitali, then look for a habal-habal to take you to the jump off point of the waterfalls.

The often ignored Biri Island is the home of seven majestic rock formations perfect for impressive photo shoots. Research suggests that these geological gems date back from the Early Miocene Period, which means they could be about five to 23 million years old. Pounded by the waves of the Pacific Ocean, each rock formation has its unique characteristic, from one filled with holes to another with horizontal lines of various shades of brown.

How to get there: You can fly from Manila to Samar via Catarman National Airport or Calbayog Airport. From there, you can take a jeep to Lavesarez town and take a boat to Biri Island.

Rufino Pacific Tower is regarded as one of the tallest buildings in the Philippines. It has 41 floors and a roof deck that gives an amazing view of the Makati skyline. It's a view that's often taken for granted so consider yourself lucky if you work in one of its offices.

How to get there: Brave hours of traffic. This is Metro Manila, after all.

Magdapio Falls may be popularly known as Pagsanjan Falls (especially in our Sibika and Hekasi books) but it is actually located in the town of Cavinti, which is adjacent to Pagsanjan in Laguna. You have two options to get there, one is the common boat ride also known as "shooting the rapids." The 17-kilometer trip takes you through 20 smaller waterfalls, canopy trees, rock formations, and, sometimes, monkey and snake sightings. A more exciting alternative is through the Pueblo El Salvador Nature Park in Barangay Tibatib. This requires walking down steep steel stairs, rappelling, and a whole lot of walking for about two hours. Once you get to the falls, you can ride a bamboo raft to go inside the Devil's Cave for a beautiful photograph.

How to get there: From Manila, take a bus bound for Sta. Cruz, Laguna. If you're "shooting the rapids," ride a jeepney to Pagsanjan. Otherwise, take a jeepney to Cavinti, then ride a tricycle to Pueblo El Salvador Nature Park.

The Ruins, often dubbed as the "Taj Mahal of Negros," is what is left of the grand mansion owned by Negrense sugar baron, Don Mariano Ledesma Lacson. It was a gift for his Portuguese wife Maria Braga. The 903-square meter mansion that once had the finest furniture and decor was burned by guerilla fighters during World War II. It is now one of the favorite destinations for photo shoots and special events.

How to get there: Talisay City is just 10 to 15 minutes north of Bacolod City, which is accessible from Manila by plane via the Bacolod–Silay International Airport.

Often compared to the Chocolate Hills of Bohol, Osmeña Peak is characterized by a cluster of green rocky hills spread out near the shoreline of Badian. The hike is pretty easy and the best time to go there is in the afternoon as it gets foggy in the morning. You wouldn't want to miss the great view of the sunset from these peaks.

How to get there: There are flights from Manila to Cebu via Mactan Cebu International Airport. From Cebu City, take a bus bound for Oslob or Li-loan then get off at Dalaguete junction. Hire a motorcycle or habal-habal to take you directly to Osmeña Peak trail.

Linao Cave of Barangay Sulangan got its name from the Waray term linao or linaw, which means clear. It gets its name from the clear water found inside its chambers. Trekking from the Sulangan Bridge to Linao Cave takes about 30 minutes. From the opening, you can either rappel down to the chamber or get through a small opening.

How to get there: There are direct flights from Manila or Cebu to Tacloban City Airport in Leyte. From the city proper, ride a bus or van to Guiuan, Eastern Samar. From Guiuan Plaza, ride a multicab that will bring you to the jump off point at Sulangan Bridge. Make sure to get a guide before you go inside the cave.

Actually just one third of a mile, the three-storey Mile-long Barracks (a.k.a. Topside Barracks) used to be the quarters of American officers and the office of Gen. Douglas during World War II. What remains now is a roofless skeleton of what was once considered the longest barracks in the world. Careful in taking your photos as this place is also believed to be haunted!

How to get there: Sun Cruises offer tour packages with roundtrip ferry transfers from Manila to Corregidor. The docks are located at Esplanade Seaside Terminal, Seaside Boulevard, SM Mall of Asia Complex.

Siargao, dubbed as the Surfing Capital of the Philippines, is not only blessed with world-class barreling waves. Surrounding it are three other popular islands—Naked, Daku, and Guyam—often visited because of their powdery-white sand, clear waters perfect for snorkeling, and even skimboarding. Guyam's claim-to-fame is the beautiful view of the sunset and coral formations surrounding this privately-owned tropical paradise.

How to get there: Only Skyjet offers direct flight from Manila to Siargao. Otherwise, you can fly to the island via Cebu. Motorcyle or habal-habal is the common mode of transportation in Siargao.

Instagram Travel Miss World Philippines 2018
Your Guide to Thriving in This Strange New World
Staying
In? What to watch, what to eat, and where to shop from home
OR
Heading
Out? What you need to know to stay safe when heading out