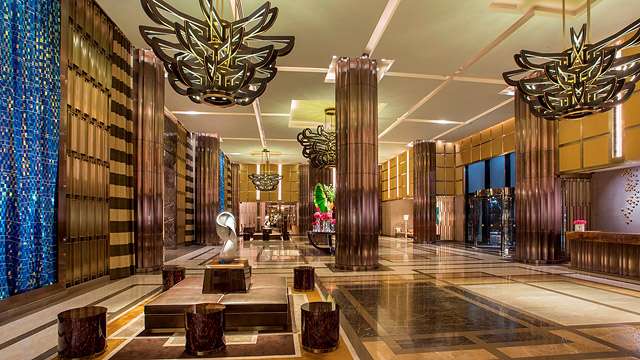 It's a Nüwa Year for City of Dreams

It's been great, Crown Towers!

(SPOT.ph) Since it officially opened in February 2015, City of Dreams Manila—patterned after City of Dreams Macau—has been one of the most popular destinations for gaming and leisure in the Philippines. It's welcomed countless guests to its three grand hotels, the Hyatt, Nobu, and the Crown Towers, in the last three years. But on January 16, Melco Resorts & Entertainment Limited—operator of the luxurious casino resort—said goodbye to all its Crown Towers properties and rebranded as Nüwa.

Nüwa, the mother goddess of Chinese mythology, is credited for creating and reproducing people after a great calamity. It is only apt that this eponymous heroine inspired the name of Melco's new brand to represent classic Asian refinement.

"We are excited to introduce Nüwa. The new hotel brand embodies the very essence of Melco’s pursuit to provide our guests the very best in sophistication, quality and innovation," Mr. Lawrence Ho, Chairman and Chief Executive Officer of Melco Resorts and Entertainment said about this business venture.

This also means that world-class restaurants Crystal Dragon and The Tasting Room are getting upgrades. The latter is now helmed by French chef Frederic Thevenet who has worked with Michelin-starred chefs Pierre Gagnaire and Alain Ducasse.

Nuwa Manila City Of Dreams Pasay Paranaque
Your Guide to Thriving in This Strange New World
Staying
In? What to watch, what to eat, and where to shop from home
OR
Heading
Out? What you need to know to stay safe when heading out