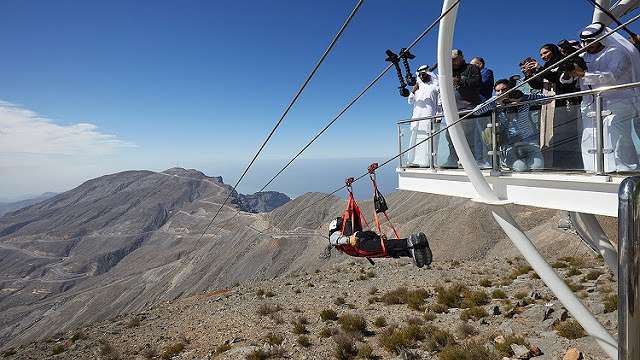 Do You Dare Ride the World's Longest Zip Line?

It's now open in the Middle East!

(SPOT.ph) If you're looking to satisfy your thirst for adrenaline rush, then the newly opened zip line suspended on the slopes of United Arab Emirates' highest mountain—Jebel Jais— might be the answer to your prayers. It opened to the public on February 2 and was certified by the Guinness World Records as the world's longest zip line.

Called Jebel Jais Flight, it spans 2.8 kilometers, which is the equivalent of 28 soccer fields; and starts at a launch pad on the edge of a cliff that's 1,680 meters above sea level. This propels thrill-seekers at speeds of up to 150 kilometers an hour, until they get to another suspended platform that's 15 stories high where they'll start another zip line flight. The hanging platform is glass-bottomed, so you better not be afraid of heights! (Obviously.) The whole tour takes about one hour.

It is with high hopes that this will be a major tourism boost for the underrated Ras al-Khaimah, an emirate in the northern part of the country along Oman border. The attraction can accommodate as many as 200 riders a day, or 100,000 riders a year.

Jebel Jais Flight is operated by ToroVerde UAE, whose current general manager helped establish the former title holder for world's longest zip line in Puerto Rico. "To operate in green mountains, with rivers and forest is one thing. But to come here to the rocky mountain of the UAE is completely different. This is 600 meters longer than the one in Puerto Rico, but the speed here is also much greater," he said in an interview with The National.

Zip Line Travel Middle East United Arab Emirates
Your Guide to Thriving in This Strange New World
Staying
In? What to watch, what to eat, and where to shop from home
OR
Heading
Out? What you need to know to stay safe when heading out