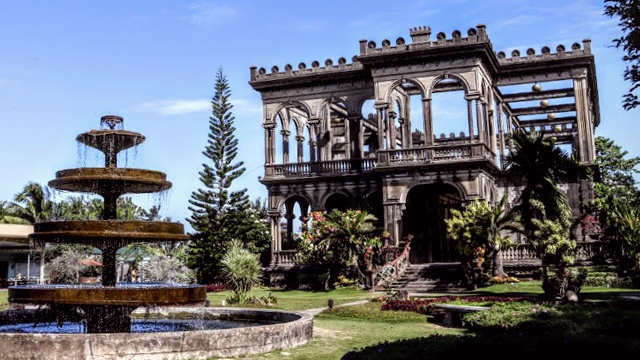 These beats roses and chocolates, any time.

Lovers give their partners roses and chocolates, or at best—jewelry—as signs of their love. In extraordinary situations, romantic heroes build for their beloved palaces, castles, and sprawling gardens as grand gestures of their undying love (and oftentimes, a tragically heartbroken tribute to it).

The Taj Mahal is the most famous of these places, but did you know that there are several more of these love shrines? Perhaps you’ve even visited a few, and one of them is located right in our own country!

The Petit Trianon is best known as the chateau that King Louis XV had built for his favorite mistress, the Madame de Pompadour. Tragically, Madame de Pompadour died four years before it was completed, and the Trianon was inhabited by her successor, the mistress Madame du Barry. Afterwards, it became a private sanctuary for Marie Antoinette. The building and interiors are done in the Neoclassical and Rococo styles, with Corinthian pillars, and exquisite, paneled rooms.

At first glance, Swallow’s Nest appears to be a castle perched precariously on a cliff over a sea, but there is more to that. The Neo-gothic creation, which was commissioned by the Baltic German oil magnate Baron von Steingel, is also called “the Castle of Love,” presumably because he had it built for his ballerina mistress.

Built in 1915, this Malaysian castle was created by Scottish expat William Kellie Smith for his wife Agnes, who missed Scotland. As with most grand, romantic gestures, construction took a tragic turn when its 70 Indian workers contracted the Spanish flu and died. Soon after, William died of pneumonia. The castle remains unfinished, and now lies in ruins.

This is the only structure on this list that was commissioned by a woman for a man. In 1606, Kita No Mandokoro had this temple built so that she could pray for her late husband, Toyotomi Hideyoshi. The widow eventually became a priestess in this shrine, and stayed in the temple until her death. If you find yourself in Kyoto, visit this historic temple to love and its beautiful Japanese Zen gardens.

Many people think the Taj Mahal is a palace, but it is actually an enormous mausoleum. From 1631 to 1653, Emperor Shah Jahan built the Taj Mahal as a tomb for his favorite wife, Mumtaz Mahal. It remains one of the most famous and finest examples of Mughal architecture, built with white marble inlaid with semi-precious stones.

One of Negros’s most famous houses is uninhabited (and also, briefly inhabited). The Ruins was the ancestral home of Don Mariano Ledesma Lacson, who built it in memory of his late wife, the Portuguese-born Maria Braga. The stately home in the midst of a 440-hectare sugar plantation was built in the Italianate style of architecture, with its arched windows, pilasters, and colonnades. The house was burned in World War II to prevent Japanese officers from using it. In spite of its state, The Ruins continues its tradition as a house of love—many couples use it as a wedding venue.

*This story originally appeared on Realliving.com.ph. Minor edits have been made by the Spot.ph editors.