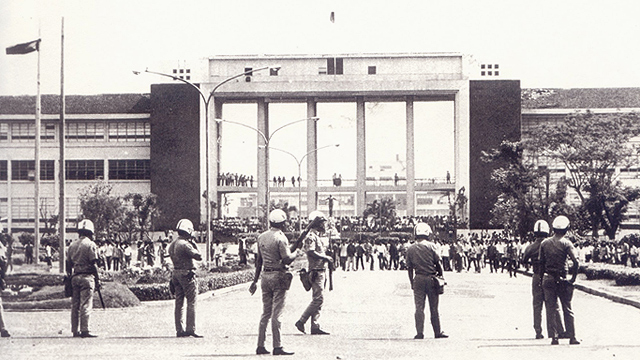 This Free Event Shows Why Student Protests Are Important

Because we've always been #woke.

(SPOT.ph) The Diliman Commune, a series of uprisings from February 1 to 9, 1971, involving students and faculty members of the University of the Philippines, was one of the most significant local moments in the history of student protests. It started as a show of support for jeepney drivers who were struggling amid the oil price hike, but eventually led to what Judy M. Taguiwalo described as "an event showcasing the power of the militant solidarity of the UP community against military incursions into the university."

To remember this historic week and to commemorate the declaration of Martial Law in September 1972, the university's history department is holding SIGWA: First Quarter Storm and Diliman Commune Memory Walk. The first session was held today, September 17 at 8 a.m., while those who missed it can still sign up for the sessions later at 3 p.m., and on September 24, 8 a.m. and 3 p.m. at Vinzons Hall, University of the Philippines - Diliman.

The memory walk explains the narrative and legacy of the First Quarter Storm of 1970 and the Diliman Commune of 1971—both events were the result of a dissatisfied people suffering through the worsening economic conditions under the rule of late dictator Ferdinand Marcos. It highlights important landmarks in student activism within the state university, including the AS Steps of Palma Hall where protests were (and still are) often held, and Vinzons Hall, home of the university's student organizations.

Diliman Commune First Quarter Storm Martial Law
Your Guide to Thriving in This Strange New World
Staying
In? What to watch, what to eat, and where to shop from home
OR
Heading
Out? What you need to know to stay safe when heading out