Disney-Themed Things To Check Out in Manila for Mickey's 90th Birthday
Loading
Already a member? Log in
No account yet? Create Account
Spot.ph is your one-stop urban lifestyle guide to the best of Manila. 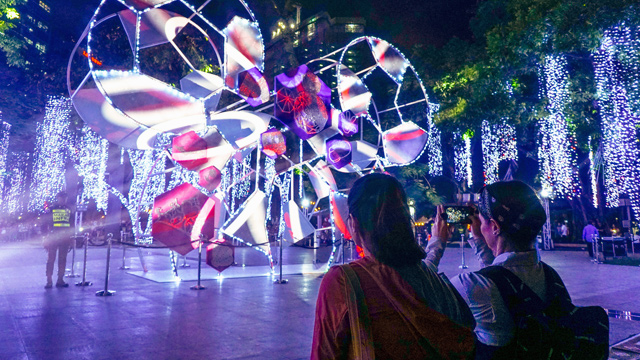 Mickey Turns 90: Fun Mickey-Related Things You Can Do in the Metro

Oh, boy, everythin' sure is a mouse-see.

(SPOT.ph) Whether you're a die-hard Disney fan (who has all the songs to every Disney musical memorized by heart) or not, we're pretty sure you can't imagine life without it.

Disney has gone a long way from when it started, bringing magic to the lives of roughly five generations: And it all began with one mouse we all know and love.

Sporting the same oversized gloves and old-fashioned shorts he’s had on for the past nine decades, Mickey Mouse has always been more than just Disney’s logo-slash-mascot. Walt Disney, founder of what is now one of the biggest entertainment conglomerates, credits Mickey for jumpstarting the success of his studio and bringing to life the rest of our favorite Disney characters. This year, Mickey turns 90 and celebrates his birthday around the world, bringing the magic all the way here to Manila.

Reminiscent of Hidden Mickey, a short yet highly entertaining segment often squeezed in between commercials on Disney channel, Disney Philippines and the Metro Manila Development Authority set up a few (not-so-) hidden Mickeys on selected stoplights around the Metro for the Mickey Lights Up Manila project. They’ve been up since November 13, so you’ve probably already spotted a few of those cute, round ears sticking out on your daily travel.

Designed to spark feelings of nostalgia, the Mickey ears are also a prelude to the holiday season. If you haven't already encountered them, just keep your eyes peeled whenever you're passing through key cities of Metro Manila.

When it comes to light displays, however, these Mickey traffic lights are just the tip of the iceberg. On November 9, Makati City's Ayala Triangle Gardens lit up with a Reimagine: A Festival of Lights, grabbing everyone's attention with a larger-than-life Mickey-shaped structure right in the middle of the courtyard. The Disney-themed light show features colorful bursts of laser lights, played in sync with well-loved Disney soundtracks.

If you missed its opening, don't worry. Every Friday until January 8, 2019, you can drop by and see the magic for yourself. The light show runs every 30 minutes from 6 p.m. to 10 p.m., giving you the perfect opportunity to de-stress from work and end your week on a magical note.

The Ayala Triangle Gardens will also be the venue for the culmination of the Mickey Design Challenge. Students of the SoFA Design Institute were tasked to design a Mickey-inspired collection which will be unveiled on November 18 through a fashion show. It will start at 4:30 p.m., and happening alongside it is the launch of the Disney Classics medley.

You get the chance to listen to the modern and electric renditions of classic songs such as "Mickey Mouse March," "When You Wish Upon a Star," "Zip-a-Dee-Doo-Dah," and "Steamboat Willie Whistle." Those who grew up watching Disney are in for a nostalgic sound trip.

But the magic doesn't end there. After all, there is no such thing as too much Disney. If you're looking to really celebrate Mickey's birthday, then you might consider watching this year's Disney on Ice. To honor the "True Original," Mickey's Super Celebration wll be showing at the SM Mall of Asia Arena from December 25 to January 6.

Because this is an interactive show, the young and the young-at-heart will get to experience being part of the action using "Mickey's Mouse Pad." The story will focus on Mickey's journey to discover his favorite memory of all time (we can't imagine how long his journey would be, considering he has been around for nine decades), joined by your favorite Disney characters as they dance on the ice. Tickets are priced at P190.

Disney lovers are in for a treat as 2018 comes to an end and we can't blame you for being excited.