What to Do in Singapore: Go on the Tiger Brewery Tour
Loading
Already a member? Log in
No account yet? Create Account
Spot.ph is your one-stop urban lifestyle guide to the best of Manila. 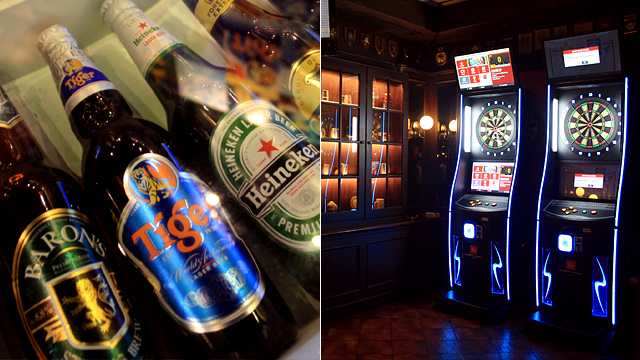 You have to be of legal drinking age, of course!

(SPOT.ph) Whoever said factory tours are boring probably hasn’t experienced Singapore’s Tiger Brewery Tour. It’s a shame that not a lot of people sign up for this tourist attraction in the Lion City, often intimidated by the distance that you have to travel to get to Jalan Ahmad Ibrahim—almost at the Singapore-Malaysia border—where the beer plantation is located. But the drive is worth it, especially since the tour ends with sampling six glasses of beer!

The guided tour starts with a short history of Tiger Beer, Singapore’s first ever commercial beer. It was actually created through a joint venture between Fraser & Neave and Heineken (yes, that Heineken!), which gave birth to Malayan Breweries (later Asia Pacific Breweries) in 1931. As the largest commercial brewery in the Malayan Peninsula, it was hailed by Singapore’s national daily as “A Wonderful Achievement” when Tiger Beer was finally launched in September 1932.

This short talk is complemented by a walk-through of some of the brand’s merchandise from the olden days and sepia-toned photographs of the first beer plantation that used to be located along Alexandra Road in Queenstown. Then, the best part—if you’re a science nerd, at least—comes next: A lowdown of what goes on during beer production. Photographs aren’t allowed inside the factory for security and safety reasons, but expect to see huge stainless-steel containers placed side by side for the brewing process. The temperature can be crazy hot, so we recommend bringing a fan and cold wipes so you can focus on the guide’s explanation of the brewery’s nine-step process: milling, malting, mashing, lautering, boiling, fermenting, conditioning, filtering, and filling. (Yes, we googled.)

After surviving 45 minutes of a mini-lecture, guests are rewarded with 45 minutes of drinking at the Tiger Tavern. You can order up some finger food to go along with your one whole pint of the original Tiger Beer and five half-a-pint beer samples of your choice—from the flavored Tiger Lemon Beer and Tiger Grapefruit to the strong alcohol mix of Tiger Black. You also go home with one bottle of Tiger Beer, just in case you haven’t had enough. We did say it’s a beer-lovers’ paradise, right?

Tiger Brewery is at 459 Jalan Ahmad Ibrahim, Singapore. Guided tours are from Tuesday to Sunday, from 1 p.m. to 5 p.m. with one-hour intervals. Tickets, priced at SGD 18 (approximately P685), are available through Tiger Brewery Tour's website.

Asia Singapore Travel Tiger Brewery Tour
Your Guide to Thriving in This Strange New World
Staying
In? What to watch, what to eat, and where to shop from home
OR
Heading
Out? What you need to know to stay safe when heading out