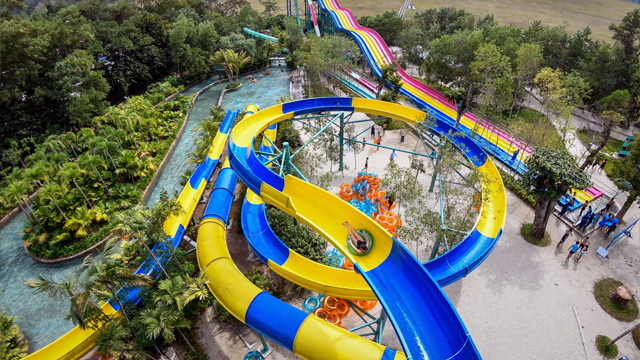 (SPOT.ph) When it comes to water parks, nothing beats the fun of going down a massive slide and into a chilly swimming pool. The longer, the better—and ESCAPE, a water theme park in Penang, Malaysia, is the newest record-holder for having the world's longest water slide. It measures 1,140 meters, according to a video posted on ESCAPE's Facebook page in June. The new attraction is expected to open to the public in October.

Kheng, in a statement published in CNN Philippines, said that "breaking the world record was never [their] intention and that the park's development was focused on coming up with a new ride that "lasts a few good minutes." In addition, ESCAPE is surrounded by towering trees and the company stood by its belief to "build around nature," as explained in the video clip. "To preserve the surrounding nature, installation is done manually without heavy machinery," they added.

The blue-and-yellow chute starts on a hilltop at 70 meters above ground and loops through a dense jungle. The ride takes four minutes to complete. A cable-car chairlift makes it less of a chore to get to the top of the water slide.

ESCAPE is at 828 Jalan Teluk Bahang, Penang, Malaysia. It is open from Tuesday to Sunday, from 10 a.m. to 6 p.m. For more information, visit ESCAPE's website.