Pink Sand Beaches in the Philippines and How to Get There
Loading
Already a member? Log in
No account yet? Create Account
Spot.ph is your one-stop urban lifestyle guide to the best of Manila. 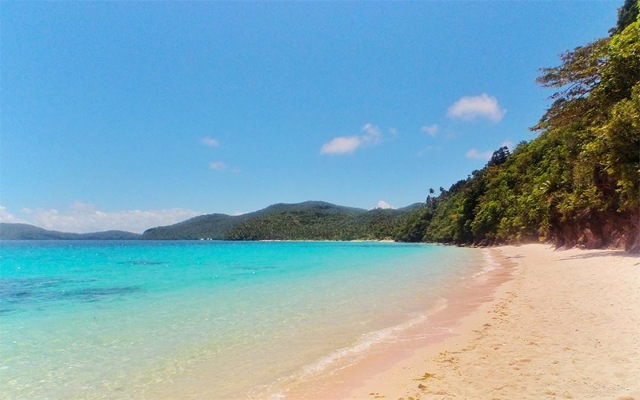 (SPOT.ph) With our more than 7,000 islands, it doesn't come as a surprise that the Philippines is home to a number of beautiful beaches of various sizes, textures, and colors. We have white, gray, cream, and—yes—even pink! As much as we'd like to think that it's because of a unicorn descending onto our shores to poop pink glitter on our sand, the color actually comes from crushed shells of the microscopic invertebrate called Foraminifera—which is neither a plant nor an animal, but a protist like the amoeba and algae. When these organisms die, their shells sink to the bottom of the ocean and are eventually washed ashore to mix with white sand. Crushed red corals also contribute to the salmon tint. Not so magical now, huh? Still, this natural phenomenon makes for nice photos so we round up all the pink-sand beaches in the Philippines for your bucket list.

National Geographic cited the pink beach of Zamboanga as one of the "21 Best Beaches in the World" in an article published on January 18, 2017. It's a well-deserved recognition because aside from the lovely hue, the strip also boasts fragments of red organ pipe corals that really are a sight to behold.

How to get there: Book a flight from Manila to Zamboanga City, then head to the City Tourism Office in Paseo del Mar. You can charter a boat from there at P1,000 for up to 10 passengers.

Northern Samar may not be as popular as other Visayan provinces like Cebu and Bohol but it surely has a number of stunning islands and pristine beaches to offer the intrepid traveler. Take, for example, Sila Island, which is known for its 92-meter-long Pink Beach that attracts tourists all year round. Rows of coconut trees, unusual rock formations, and the surrounding coral reef add to the charm of this paradise.

How to get there: Book a flight from Manila to Tacloban City, Leyte. From there, get on a van to Calbayog, Northern Samar; then take another van to San Isidro where there are boats going to San Vicente.

Subic Beach on Calintaan Island, which is four minutes away from mainland Sorsogon, is a mix of creamy white sand and red-colored particles produced by crushed red corals. It is divided into two segments—Subic Liit and Subic Laki, and the latter has a few cottages where you can stay for the night. While you're there, make sure to drop by Calintaan Cave—an underwater cave which opens into a jaw-dropping cove.

How to get there: You can catch a flight to Legazpi City, then ride a bus to Matnog. From Matnog Port, charter an outrigger boat to Calintaan Island.

Cape San Agustin is tucked away in the quiet barangay of Lavigan in Governor Generoso, Davao Oriental. You can climb up two of its three lighthouses and enjoy a panoramic view of the vast Davao Gulf and Celebes Sea, surrounding verdant hills, and pinkish sand in Parola Beach.

How to get there: Book a flight from Manila to Davao City, then take a public bus or a van to Governor Generoso.

The pink beach of Panganiban is a remote island paradise that's about 30 minutes away from mainland Camarines Norte. It is officially called Talion Island, but it has become more popular as Parola because of the old lighthouse on its coast. Totally uninhabited, you'd definitely feel at peace while walking along its pink shores.

How to get there: Book a flight to Naga, Camarines Sur, then take a bus or a van to Daet, Camarines Norte. From there, you need take another bus or van to Jose Panganiban. Charter a boat to Parola Island from Larap Port.

With its sandbars and beaches, it's still a surprise why Balabac in Palawan is not as popular as El Nido or Coron. It even has its own pink-sand coast! We're not complaining though, this just means that travelers patient enough to get there can have the whole island paradise all to themselves.

How to get there: Catch a flight from Manila to Puerto Princesa, then take a bus or a van to Rio Tuba. From Rio Tuba, you can get on a public boat to mainland Balabac.

Tikling Island, another pink-beach wonder in Sorsogon, features rock formations that are perfect for amazing travel photos. It is privately owned so you can't really stay overnight, but you can definitely spend the day and have a picnic along its pink-hued shores.

How to get there: You can catch a flight to Legazpi City, then ride a bus to Matnog. From Matnog Port, rent a boat to Tikling Island.

Camarines Pink Sand Miss World Philippines 2018 Travel Beach Sorsogon Zamboanga Samar Palawan Summer Davao
Your Guide to Thriving in This Strange New World
Staying
In? What to watch, what to eat, and where to shop from home
OR
Heading
Out? What you need to know to stay safe when heading out