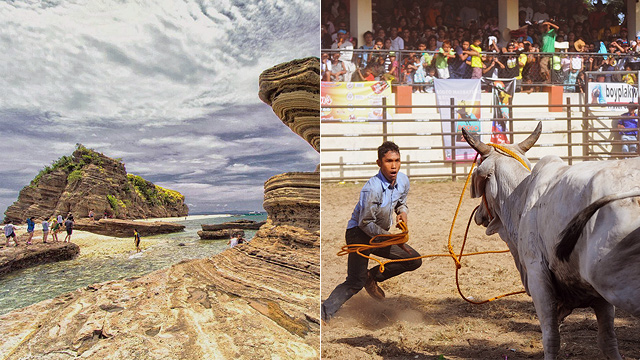 10 Exciting Things to Do in Masbate

Welcome to the Philippines' very own "Wild Wild West."

(SPOT.ph) If you’re just starting to explore the Philippines’ under-the-radar tourist spots, then Masbate in the Bicol Region is an unassuming province worthy of your bucket list. As the country’s very own “Wild Wild West,” it boasts ranches where you can ride a horse and lasso a cow as well as see white-sand beaches and pristine islands that are like no other. Here are 10 compelling reasons to check out the “Rodeo Capital of the Philippines.”

Dress up for the Rodeo Festival

Every April, the people of Masbate have every excuse to dress up as cowboys, jazz up local bars and restaurants as salons reminiscent of 19th-century Old West, and release their cows into the streets for "cowboys" to catch. The best part of this one-of-a-kind spectacle is feasting on tender beef steak for the whole duration of the festivities.

Fulfill your childhood dream of being a cowboy by touring cattle farms, learning how to ride a horse, and lassoing a cow. Sese Brahmans Ranch in Mandaon is the hands-down choice for a ranch tour because of the variety of cattle in the sprawling property.

The province of Masbate is a chain of islands composed of the Masbate mainland, Ticao, Burias, and dozens of islets strewn between the Bicol Peninsula and the Visayan archipelago. In the mainland, you can hop to a variety of beaches in the towns of Balud, Mobo, Aroroy, and Dimasalang, which are reminiscent of Boracay’s splendor from decades ago. The most notable are Palani and Bituon, which have a handful of resorts where you can play beach volleyball, go bamboo rafting, gaze at the sunset or simply laze around without having to deal with the maddening crowd.

Marvel at the natural wonders of Ticao Island

This charming island sub-province an hour away from the mainland takes pride in the picturesque Catandayagan Falls, which drops from a cliff and falls directly into the sea—perhaps the only one of its kind in the country. A few minutes away is Burubangcaso Islet, which boasts talcum-fine sand, crystalline water, and a huge monolithic rock formation. Ticao is also home to two of the best resorts in Masbate—Ticao Altamar Boutique Resort and Ticao Island Resort, both located in San Jacinto town.

Another equally delightful sub-province north of the mainland is Burias Island. Hop around the small islands of Animasola, Sombrero, Tinalisayan, and Dapa; or relive the glory days of San Pascual town through the Spanish-period structures which have survived the ravages of time. You can also visit the Balinsasayaw House, a residence built in 1991 which now provides refuge to 80,000 birds called swiftlets (locally known as balinsasayaw) in its basement. You can also cruise in Mapanique River and marvel at the mangrove forests’ rich wildlife.

About 15 minutes off Masbate City, this 251-hectare reef marine sanctuary is the perfect spot to go snorkeling or kayaking. The stretch of white sand also makes the perfect backdrop for an Instagram shot. Buntod Sandbar is an awardee of the Para El Mar Best Marine Sanctuary by the Marine Science Network because it's remarkably well-preserved.

If you are a scuba diver, don't miss the chance to plunge into the depths of Ticao Pass. You'll be amazed by the sight of rare manta rays that frequent the Manta Bowl Shoal, which is around eight hectares. Other marine creatures that pass through the channel are hammerheads, thresher sharks, and whale sharks (butanding).

Situated in Milagros town, Fazenda de Esperanza (“Farm of Hope”) sells a variety of flavored cow’s milk, locally produced baked goodies and mozzarella cheese, and organically grown farm produce. But unlike your usual farm, it also serves as a rehabilitation center where victims of substance abuse are taught the value of hard work.

For a different kind of adventure, you can explore the 150-meter high Bat-ongan Cave. It has seven openings leading to an underground river, a network of caves, and two stones shaped like an altar and pulpit. A large tunnel inside the cave is connected to another nearby cave which is inhabited by a large bat population. There are all-terrain vehicles for rent at the main road, and you can ride them towards the cave’s mouth.

For breathtaking scenery, climb to the peak of Mayong Payong in Mobo. The view deck gives guests front-row seats to a stunning vista of Masbate, Mobo Bay in the distance, and even of neighboring Ticao Island. It's best to visit at sundown.

How to get there: Direct flights are available from Manila to Masbate City. A cheaper but more time-consuming alternative is flying to Legazpi, taking a van to Pilar town in Sorsogon, and riding a ferry to Masbate.