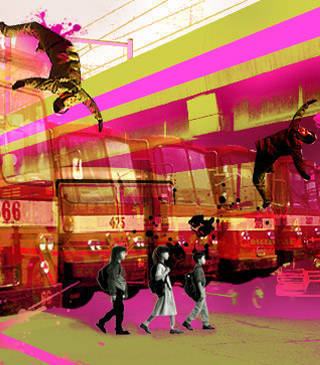 Attack of the Killer Buses!

SPOT.ph blogger LOURD DE VEYRA laments Manila’s Evel Knievel traffic system where "you can drive in any psychotic manner as long as you’re not hitting anyone" and wonders: Do our drivers need intelligence tests? 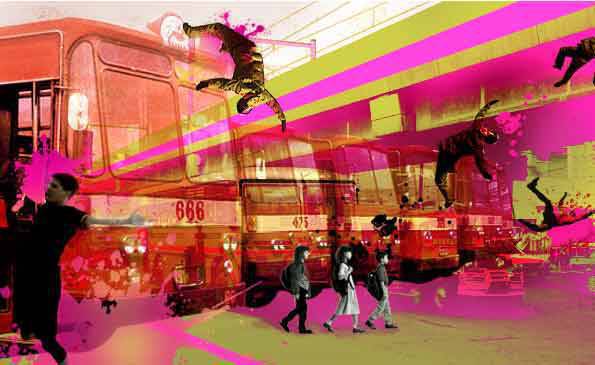 Economics has nothing to do with it. To say that bus drivers drive recklessly because they have to meet their passenger quota is just wrong. It’s like saying Willie Revillame treats his staff crudely because he’s a perfectionist (If he were, he’d be hiring Ballet Philippines instead).

The most useless part of the entire driver’s licensing system is the drug test--most druggies I know stay home and stare at their Spongebob carpets while listening to Radiohead. There should be both EQ and IQ tests. More jerks can be found inside Ford Expeditions and Chevrolet Suburbans in those pesky convoys, and those TV network vans who think they’re God’s urgent gift to broadcasting ("Quick, rush this Kris Aquino interview tape for editing. Nownah!")

This is the bleeding heart’s nonsensical reasoning: they drive fast, cut you off your lane, disobey traffic signals, drive in a lethal counterflow as if in a Nicolas Cage movie because they have to earn a living. True, the idea of public transport is not only to bring you from point A to B, it’s also a business. Drivers are forever scrambling, outracing each other to the nearest bus stop. The more passengers they haul, the more money the driver earns at the end of the day. After the last month’s alarming series of bus-driver induced fatalities, there were proposals for bus companies to reconsider the "boundary" system and pay the drivers fixed daily rates.

But life isn’t always a Brocka movie. One cannot afford to be understanding and merciful where human lives are involved and huge hunks of metal move at speeds of over 100 kph. The issue should not be reduced to a class struggle. Government must, to use the words of the philosopher Ving Rhames, go medieval on their asses. One must only watch the grotesque CCTV footage of that Jell Transit bus slowly rolling over a two-year-old girl, leaving behind her dead body and rendering mother Christine Humabon armless. More: this happened in front of Camp Crame, on a goddamned pedestrian lane (Most drivers-both public and private-think that a pedestrian lane where you honk furiously at crossing people).

The concept of reckless driving does not apply in these roads. Because we’re so used to Evel Knievel system of motoring: you can drive in any psychotic manner as long as you’re not hitting anyone. But if he saw a Nova Bus weaving through EDSA traffic in an amazing blur, Evel Knievel would be pissing in his pants.

This is also the only country where you actually have to put signs like "NO COUNTERFLOW," which is in essence no different from BAWAL TUMAE DITO." Or the both funny and desperate "BAWAL TUMAWID. NAKAMAMATAY." This is a country where comedy gold is achieved by news segments where both drivers and traffic enforcers are randomly shown a number of common traffic signs, most of which they fail to correctly identify. Three days after the bus tragedy in Lucena, Quezon, a reporter interviewed several drivers and asked them at random what the maximum speed is for highways. Motherfuckers guessed 60 and 80. One said 100.

Then here comes a congressional partylist, who wants to ban the use of iPods and mp3 players inside vehicles. Last time we checked, Mario Villamar, the bus driver who slowly ran over the little girl wasn’t setting his iPod to party shuffle mode. What government should ban are useless party lists.

One of the many bus accidents in Manila.

CCTV cameras are useless-except when presented as evidence after the fact. Orwellian fears of centralized surveillance and control are unfounded. "Orwellian" assumes a system actually works. Otherwise, it’s just like a Hayden Kho video only with automobiles.   Concrete barriers, enforcers, signs, and driving schools will remain useless in the face of a inept bureaucratic system. And it begins with how driving licenses are handed out. I swear to God this is true: when I renewed my license two years back, there were total strangers sitting next to me at a waiting area desperate for help, staring at documents as if they were written in hieroglyphics. I spent a quarter of an hour teaching two dudes on how to fill out registration forms, pointing out where they had to write their names, address, age, and even where to put their goddamn signature. Fuckit, I even had to ask ’Kelan po kayo pinanganak?’ ’May asawa na po ba kayo?’ and explain to them why they have to check ’M’ under ’sex.’ Three other older guys approached me and also asked for help with their forms, maybe thinking that-even with my Atari Teenage Riot t-shirt-I was a kindhearted LTO staffmember or something. Which brought me to the question: if we were all renewing our licenses, how could those dudes have gotten theirs to begin with? I had to get out of there before I could become the Albert Schweitzer of drivers’ application forms.

The website of the Land Transportation Office reported an increase in the number of driver’s licenses and permits it has issued. From 3.7 million in 2006, it has swelled to 4.2 in 2008. Road accidents in the country last year numbered to 15,543 according to the DOTC, a 35% increase. Claire dela Fuente-president of Integrated Metropolitan Bus Operators Association (IMBOA) and so-called "Karen Carpenter of the Philippines"- bemoaned the negative focus the media is giving buses. Sigh. I don’t know if she’s been on one of them buses lately, and has experienced being assaulted from all sides by strange G-forces physics have yet to discover. Let’s see if she can still sing, with heartbreaking vibrato, "Sa-yaaaaang..."

And here comes the PNP with the plan for an academy for offending drivers. Wait, shouldn’t that have come first before they can actually get licenses?   In any case, that’s wonderful news in a society where most people seem to have learned how to drive from Bad Boys 2. The irony is that last February, the DOTC launched a road safety awareness campaign called "Ligtas Lakbay, Tuloy ang Buhay."

Bayani Fernando was right when he said that the Metro Manila street is a metaphor for the state of the country. But he’s no lit major, and EDSA traffic seemed to have worsened while the MMDA turned the entire cityscape into a pink hell. Yet indeed, the Metro Manila street is an end-result of a complex web: ineffective enforcement, grossly outdated laws, bureaucratic inefficiency, governmental myopia (instead of rickety jeepneys and buses, we should all be in subways right now), corruption on both the highest and lowest levels, and the average Pinoy penchant for sticking a symbolic middle finger in the face of authority.

Maybe we need intelligence tests. The only drivers we should allow on the road are the ones for whom self-preservation is an instinct-not motorcyclists who like to test the hardness of concrete barriers when drunk. I’m not saying that literacy is a prerequisite. Any chimpanzee can drive a car. But why should we leave people with IQs of 50 in charge of a 100,000-pound ten-wheeler? I’m sorry, but I think we should all start regarding driving as a responsibility, not an inalienable human right.

Maybe we should mete out even harsher penalties. And maybe it’s time we actually enforce them. The LTFRB is contemplating on a total paralysis of the franchises of erring bus lines. There are also reports of revising present laws that says for reckless driving, offenders are only required to pay P500 for their first offense, P750 for their second, and P1,000 if they commit the same offense for the third. A license only gets revoked on the fourth time. But LTO chief Alberto Suansing declared in a report by GMANews.tv, "We don’t have a database to know if there were previous offenses, unless it is reported to us by the police."   Maybe we should start employing that wonderfully Singaporean form of corporal punishment called caning. But based on our current motoring proclivities, that would deplete this country’s rattan supply in no time.

Maybe what we should ban are television sets inside public buses, where the pure evil that is Wowowee   can envelop passengers’ consciousness for hours. Come to think of it: most TV sets are usually fixed above the driver’s head, a dangerous distance that leaves him open to the assault of screaming hosts and Lito Camo songs. Mixed with cheap air-fresheners and constant exposure to radio stations where DJs yell, "Meh ganun?!" every three seconds, it’s possible that it makes for a disturbing auditory cocktail. What its effect has on the human mind’s capacity for depth perception,   and the ability to make sound spatial decisions and distinguish between the color red and green, we’ll never know.   But we ought to play it safe. Maybe government ought to decree that all modes of public transport play nothing but Mozart and Beethoven’s late quartets. There’s a world of difference between what people want and what people need. A kid wants Playstation 3 and triple cheeseburgers but what he really needs is exercise and cereals. Mozart is good for you. Willie is not.