Lourd de Veyra on Noynoy and Kris: Shut up, little sister
Loading
Already a member? Log in
No account yet? Create Account
Spot.ph is your one-stop urban lifestyle guide to the best of Manila. 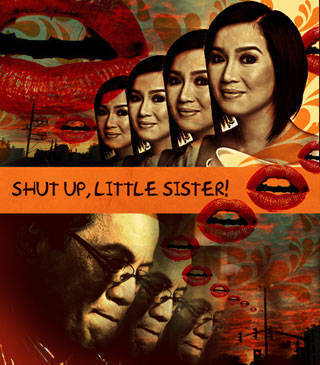 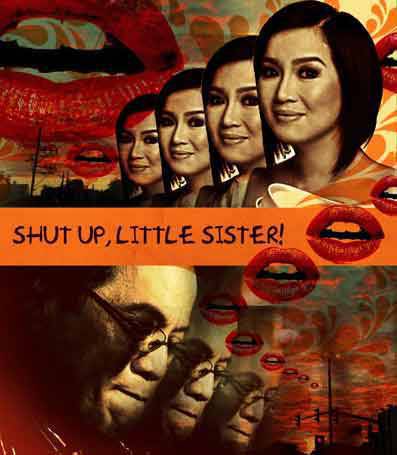 Character, says Heraclitus, is fate. Character might also be manifest in the physical. Did you ever notice how Sen. Noynoy Aquino walks? He slouches, he droops, flails his arms like jerky pendulums, and with bow legs that seem to move to opposite directions. It is the kind of gait not conventionally associated with strength, pride, and leadership. More like Shaggy of Scooby Doo.

I should be the last person in the world to speak about posture, but compare that to his father’s gait. I would think twice about voting for someone who seems to allow himself to be verbally bullied around and humiliated by his youngest sister.

The youngest sister, for whom no barrier exists between the public’s right to know and her private life, including her baby’s toilet habits. The youngest sister, who has mastered the fine verbal art of too-much-information, her cerebral cortex directly connected to her mouth. The youngest sister, who if we go by her own words, should be the one running for president. After all she herself announced that she was "a young Ninoy" and her mother’s favorite-at a time when the entire nation was in the thralls of grief. Unfortunately (or fortunately), she has several more years to go before she turns 40, the minimum age to run. But what she lacks in qualification for candidacy, she makes up for in candor. Excessive amounts of it.

The youngest sister, whose patent tactlessness has now become a recognized part of Philippine daily life. Our lives would be empty without hearing her say something that sounds like nails across a blackboard. The scary part about her is how media seems to have a disturbing dependence on her every opinion when it comes to any subject that involves the "Aquino" name. Rioting farmers shot to death at Hacienda Luisita? Interview Kris. Stock market crashed? Malacanang razed to the ground? Three passenger planes collide?   Interview Kris. And she’ll even tell you about the Starbucks machiatto she drank. She’s like a car accident on SLEX-it’s horrible but you can’t look away.

People will say it’s about time to treat the presidency with seriousness and solemnity. The reasoning that our brand of democracy never goes anywhere is this: if we can make fun of the head of state, the occupant of the highest seat of power, then what’s sacred anymore? In the senator’s case, he no longer needs an image-demolition team from opponents-with a sister with brains in her mouth.

Noynoy isn’t even president but instead of platforms and agenda for change, all his youngest sister can ever talk about is his receding hairline, his awful pleated pants, and how she’s consulting with comedian and wig-store owner Arnell Ignacio about matters follicular. I can very well understand this concern about hair, as well as the mad scampering for designers and stylists. Only shallow people do not judge by first impressions, Oscar Wilde reminds us. What would be infinitely more humiliating, however, is this: when the entire world knows about your tragically receded hairline, and all of a sudden you appear on TV with a Koreanovela star’s full head of hair.

"The idea of fashion," writes the semiologist Roland Barthes, "is antipathetic to the idea of sainthood." That last word is the very foundation of this whole Noynoy-for-president business in the first place. For the youngest sister to mindlessly open her mouth is to piss on the mythology.

But maybe we just have to resign ourselves to this fact: it’s Kris Aquino’s world-we and Kuya Noynoy just live in it.

His mother hated unsolicited advice, but we can’t help but give to kuya the following suggestions should he become the second President Aquino.

-       Never again let youngest sister get away with indirectly insulting girlfriend Shalani Soledad by insisting a lifetime of bachelorhood. Do get married soon, and do let condescending youngest sister pay for wedding.

-       Issue gag order on youngest sister-on whatever subject. Especially that schtick about her being a young Ninoy and her mother’s favorite. Before she completely smears family name.

-       Exile youngest sister to obscure African country (preferrably one with a protractedly bloody civil strife) if she does not shut up.

-       Impose severe penalties on any media outfit that would glorify every trivial detail of youngest sister’s life.

-       Order immediate refurbishment of Club Filipino, which has become quite old and cramped. If you’re going to make history, might as well change the tacky chandeliers. A repainting job for Kalayaan Hall is in order.   It’s become too dank and sad. Look at what the LP did during Noynoy’s September 9 announcement: they rightly covered the damn place in screaming bright yellow.

-       Should Mar Roxas agree to be his running mate, by all means, avoid, like what his mother did to Doy Laurel, calling his vice president "bangaw." That would be the height of ingratitude.

-         Always keep in mind: if those National Bookstore postcards are to be believed, the Philippines has never had a bald president.