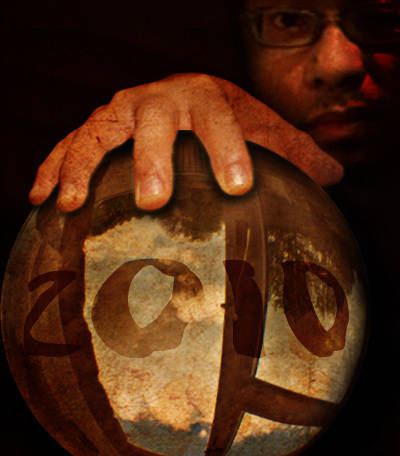 Our SPOT.ph blogger on 2010: "It doesn't take a Madam Auring to augur that 2010 will be more insane than Hayden Kho running across a Cavite pineapple plantation."

"The year Asians fear," headlined a major broadsheet on the first day of 2010. Indeed, the Year of the Tiger has always been associated with social tumult. Case in point: the 1986 Edsa Revolt and the 1998 elections that easily catapulted Erap into Malacanang. Let's hope the Year of the Metal Tiger is when the world's greatest golfer regains his...whatever. Metal, after, is what golf clubs are made of, and we can be pretty sure that it can smash through car windshields. Nevertheless, it doesn't take a Nostradamus or a Madam Auring to augur that 2010 will be more insane than Hayden Kho running across a Cavite pineapple plantation. "Demons of 2009 to haunt New Year," screamed the title of Amando Doronila's essay on the Inquirer front page. Indeed, the seeds are all there, and we simply await the malignant growths. In any case, I'm sure that 2010 will also be anus horribilis or "ugly, ugly butthole." Already, PAGASA has predicted a long, inordinately hot summer. That's because God hates us all for calling him by the all-too contemptuously forward nomenclature "Bro," which is the title of a movie by the B-movie actor/producer Roland Gan Ledesma (Bro… Kahit Saang Engkwentro) and the name of a wireless Internet service that has left me deeply unhappy. In any case, the Philippines has always enjoyed a symbiotic relationship with misery.

Should we turn out wrong, don't blame us. You don't see me holding a crystal ball and wearing a turban on head, do you?

1. THE AMPATUAN CASE WILL BE FORGOTTEN. Especially with a press that has the attention span of a gnat. Remember the headlines that were once fed to us as if a matter of life and death: Garci, ZTE, Jocjoc Bolante, Con-Ass, Le Cirque, and everything else that made us indignant enough to spill into the streets carrying placards and silly performance art.

2. THERE WILL BE MORE MARITIME MISHAPS. And we thought we all learned our lessons after 2008's M/V Princess of the Stars.

3. ERAP WILL BACK OUT FROM THE PRESIDENTIAL RACE AT THE LAST MINUTE. Only then he will be confirm that the children of priests truly are entitled to aspire to the priesthood, too.

4. PACQUIAO WILL BEAT THE SHIT OUT OF MAYWEATHER BUT WILL LOSE HIS CONGRESSIONAL BID IN SARANGGANI. Judging by form alone, our boy will render Floyd's face pink. But look, if the Pacman can't even get people to take him seriously as a movie star, what more as a legislator? Then again, there's always the Comelec Second Division, where nothing, it seems, is impossible, whether casting moral judgment on gays or discrediting Ramon Magsaysay Awardees for Public Service.

5. NOYNOY'S RATINGS WILL SLIDE DOWN WITH GLACIAL MIGHT.
I have nothing against the man. But once upon a time, Lotlot de Leon and Jolina Magdangal had legions of fans, too. Then again he has Kris Aquino and Boy Abunda.

6. THE ELECTIONS WILL BE ONE BIG-ASS MESS. Come on, you really think automation is gonna work? Smartmatic's pronouncements– including the video showing counting machines being efficiently assembled in Chinese factories, plus its boasting of having delivered more than 3,000 units as scheduled– seemed to be more a triumph of spin than fact. Everyone's so busy with sinking ships, the Maguindanao Massacre trial, the Arroyo family's Hong Kong sojourn, that there was actually no way to confirm.

7. ANOTHER   DESTRUCTIVE TYPHOON WILL HIT THE PHILIPPINES.
This is an easy one. Ambiguity hinged on a significant degree of predictability is one of those cheap schticks employed by most so-called "celebrity psychics." Example: "May artistang mamatay ngayong taong ito!" "May magkasintahang maghihiwalay!" "May batang artistang mabubuntis!" What the f–k? Someone old actor always dies every year, dude.   And we all know that showbiz isn't exactly the fount of eternal romantic unions, and that we are all privy to the semenal/ovarian prowess of the young hearthrob.   Typhoons hit the Philippines with the same regularity of Kris Aquino mouthing hair-raisingly tactless statements. But the sad part: even after Ondoy, we never, ever learn from our mistakes. I hope someone would prove me wrong, but I'd really like to know: whatever happened to the 21-point disaster management plan architect Jun Palafox recommended to Malacanang a couple of weeks after September 26, '09? And PAGASA will still be terribly under-equipped.

8. NONE OF THE PREDICTIONS MADE AT THE START OF THE YEAR WILL COME TRUE.
It's all crap– those especially those forecasts regarding fashion. "Turquoise will be the new black," "Vampire chic will be the rage." "Plain white shirts will rule the year." "Bangs will be soooo passé." Nobody actually double-checks. By the middle of the year, nobody actually gives a flying f–k. And they're usually made by people who look like they need emergency makeovers themselves.     Same goes to those silly diet and health fad predictions. We'll all still be unhappy fatsos who'll never fit into slim-fitting vampire-inspired outfits.

10. THE BLACK EYED PEAS WILL RELEASE ANOTHER DUMB, SATANICALLY CATCHY HIT. This group, which has made a fortune out of songs that address our inner moron, will make another lyrical masterpiece in the tradition of "My humps, my humps/ My lovely lady lumps/ Check it out" and "Boom Boom Pow." Which suddenly reminds me, with fear and trembling unto despair: those Korean girl groups.

God help us all.