Lourd de Veyra: 35 and still alive or thank God for these transcendent moments in music
Loading
Already a member? Log in
No account yet? Create Account
Spot.ph is your one-stop urban lifestyle guide to the best of Manila. 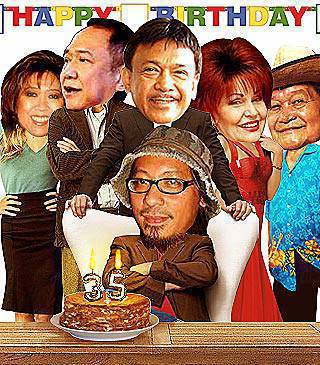 Lourd de Veyra: 35 and still alive or thank God for these transcendent moments in music

Our Spot.ph blogger's birthday suite: Thank you for the music.

That guitar solo in Steely Dan's "Peg." The pummeling Black Sabbath riffs in "Supernaut" and "Wheels of Confusion." Black Sabbath's Vol. 4– what the hell, the first four Black Sabbath albums. Anakbayan's "Jeepney Rock" and Edmund Fortuno's near-mishap of a drum solo. The flute ostinato in "Up, up and Away" by The Fifth Dimension. The original packaging canister for PiL's Metal Box. Rico J. Puno's vocal performance in "Lupa," especially towards the climax; but more importantly for his spoken parts in "The Way We Were" and if only for this line: "Namamasyal pa sa Luneta... at walang peraaaaaa." The bass line in Liquid Liquid's "Cavern," as well as ESG's "Tiny Sticks" and "You Make No Sense." All the songs in Urban Bandits' Independence Day, plus the two tracks in the Twisted Red Cross compilation Fatal Response, "News of the World" and "The Battle of Mendiola." The evil echo and drum in Augustus Pablo's "King Tubby Meets the Rockers Uptown." Cheech and Chong's monolithic "Earache My Eye," which gives another meaning to the term "stoner." The intro to Herbie Hancock's "Rockit." The insidiously infectious drumming in Neil Young's "Cinnamon Girl"; and while we're at it, the old-man whine in "After the Gold Rush" and "Only Love Can Break Your Heart." The vocal harmonies in The Beatles' "Here Comes the Sun," "She's Leaving," "She Said She Said," "Dear Prudence," "Paperback Writer," and "Because." The peel-off banana sticker in the Velvet Underground box set. The explosive opening of The Wedding Present's "Yeah Yeah Yeah." The original Metropop recording of "Umagang Kay Ganda" with Tillie Moreno and Ray-An Fuentes in the face of which every other rendition (especially the one used by the morning show) sounds like crap. The London Calling album cover.   The Belle and Sebastian song that starts with the line, "She had a stroke at the age of 24/ It could have been a brilliant career." Clyde Stubblefield and Jabo Starks for all their beautiful crimes committed in the name of James Brown. James Brown. Jun Regalado and Mang Roger Herrera for their rhythmic collaboration spanning decades that saw the finest of Filipino pop, which may or may not find its zenith in Pilita Corrales' feloniously funky version of "Ang Tangi Kong Pag-Ibig." The bitter irony in The Filth and the Fury, the Julien Temple-directed Sex Pistols docu. The moment Morrisey so gaily asks,"Why pamper life's complexity when the leather runs smooth on the passenger seat?" and Johnny Marr's exquisite opening guitar jangle. The entirety of 4Hero's ethereal cover of Minnie Ripperton's "Les Fleurs," with its strings, celestial choruses, and upright bass. The groove propelling A Certain Ratio's "Do the Du" that slays me every time. The guitar lick in Betrayed's "Never Meant to Be This Way." Gil Scott-Heron's "The Revolution Will Not Be Televised" which may or may not have directly influenced Radioactive Sago Project. The bangs on every Ramone, from Dee Dee to Joey. The somber bass line in Fugazi's "Shut the Door," just before being shattered by a blast of guitar reminiscent of glass shards. The bristling guitar intro of Gang of Four's "Ether." The piano and chorus of "Tiny Dancer" by Elton John. Field Music's self-titled album, especially every instrument used in "If Only the Moon Were Up"– one of the songs I'd like played during my funeral besides The Band's "Tears of Rage," Slayer's "Altar of Sacrifice," The Free Design's "Butterflies are Free," The Chordettes' "Mr. Sandman," Black Sabbath's "Behind the Walls of Sleep," Bong Piñera's "Sa Dako Pa Roon," Chuck Mangione's "Maui Waui," the first three songs in Rites of Spring's End on End, El De Barge's "Time Will Reveal," and Eric Dolphy's "Hat and Beard" from Out to Lunch. The Mati Klarwein artwork adorning the cover of Miles Davis' Bitches' Brew. The ominous riff to The Beastie Boys' "Looking Down the Barrel of a Gun" and that brilliant part where they break, "Looking down the barrel of a gun/ Son of a gun / Son of a bitch/ Getting paid, getting rich" The moment when Vernon Reid goes nuts in the middle of "Cult of Personality," sounding like a freak hybrid containing the DNAs of Ornette Coleman and Van Halen. Napalm Death live at Birmingham, which remains one of the most frighteningly intense performances I've seen on video. Yoyoy Villame and the surrealistic excess of "Hayop na Combo" and the filthy funk of "Trapik." Every song contained in Terry Callier's What Color is Love. Basil Valdez's "Tuwing Umuulan Kapiling Ka," which I listen to regardless of weather, both emotional and otherwise. Eggstone's "Good Morning," which – along with Emitt Rhodes' "Somebody Made for Me," Harper's Bizarre's "The 59th Street Bridge Song," Joni Mitchell's "Help Me," Nico's "The Fairest of the Seasons," and Todd Rundgren's "It Wouldn't Have Made Any Difference" – has gotten me through a very unpleasant stage in life. The keyboard phrase that occurs in Roxy Music's "To Turn You On" at exactly 3:38. Then there's the soundtrack to my unhappy adolescence: "Free Speech for the Dumb" and "The Blood Runs Red" by Discharge; "Attitude" and "Pay to Cum" by Bad Brains; all the songs on the Dead Kennedys' Fresh Fruit for Rotting Vegetables; D.R.I's Dealing With It, and Black Flag's Damaged. The heartbreakingly fragile bridge in the Beach Boys' "Wouldn't It Be Nice," the song to which I shall take to the altar a girl named Marjorie, who likes neither Steely Dan nor Napalm Death.

Music
Your Guide to Thriving in This Strange New World
Staying
In? What to watch, what to eat, and where to shop from home
OR
Heading
Out? What you need to know to stay safe when heading out