Relief Carving by Jose Alcantara Now on Display at National Museum
Loading
Already a member? Log in
No account yet? Create Account
Spot.ph is your one-stop urban lifestyle guide to the best of Manila. 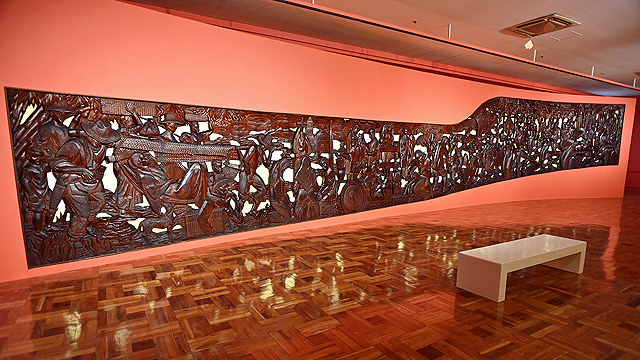 You can see it for free!

(SPOT.ph) Before the Cultural Center of the Philippines, The Theatre at Solaire, and Newport Performing Arts Theater, Philam Life Auditorium along United Nations Avenue in Ermita was the preferred location for Metro Manila's theatrical and musical performances. This 780-seat theater is housed in a now-abandoned building that was built in 1961 and designed by Architect Carlos D. Arguelles,who was also behind the Philippine National Bank Building in Escolta and DBP Building in Makati. But aside from being known for its excellent acoustics (designed by the same people behind the architectural acoustics of the Sydney Opera House and Avery Fisher Hall), the auditorium is also revered for a relief carving that adorned its walls. Now, this massive piece—created by Filipino sculptor Jose Alcantara (1911-2005)—is on display at the National Museum of Fine Arts in Manila.

Alcantara first dabbled in woodworking at the age of 10 as an apprentice in a sculptural shop in Quiapo. He later worked as a carver for Gonzalo Puyat, then trained in the atelier of Isabelo Tampinco, who was one of the finest sculptors of his time. In 1961, Alcantara was commissioned by Philippine American Life and General Insurance Company to create a carving that would embellish the walls of the auditorium. Through the help of woodcarvers from Paete, he was able to make a 1,536-meter narra-made piece that portrays Filipino culture and history.

In a 2013 interview with BusinessWorld, acoustics expert Ray Sison said that the wood carving enhanced the sound that reverberated in the theater. Philam Life Auditorium had just the right amount of sound reflectors and absorbers—from the narra mural to the cushioned theater seats—that the entire hall received the same amount of high-quality music even if you're seated at the back.

During the ceremonial turnover of the piece (along with a P5-million grant) on March 14, Philam Foundation president Max Ventura talked of the Alcantara work as "a silent witness to grand performances to world-renowned artists through the years, not to mention high school and college graduations." It complemented all the proudly Filipino performances staged at the auditorium until the last curtain call in March 2013—a month before Philam Life moved to its new office in Bonifacio Global City. The insurance company sold the building to mall developer SM Development Corporation.

National Museum of the Philippines director Jeremy Barns explained that segments of the relief carving are to be distributed in various galleries within the museum. Otherwise, it would be too overwhelming to look at, he said. Each panel would be placed side-by-side with equally compelling masterpieces of our great Filipino artists, providing a dialogue between two mediums and even two maestros through their works.

The first piece that was unveiled to the public during the ceremonial turnover is on display in Gallery XVI of the museum's third floor. Previously located on the right wall of the auditorium, it features scenes of Muslims meeting Filipino-Christians for the first time as well as depictions of the daily lives of locals: artisans sculpting a bul-ul, Muslim women showcasing their traditional dance, and Filipinos hearing mass. It is mounted across a large-scale painting by Carlos "Botong" Francisco.

Since the National Museum of the Philippines waived its admission fees in 2016, the educational institution has been receiving more and more guests every day. With several pieces now added to its collection, there are more reasons to come back to its hallowed halls.