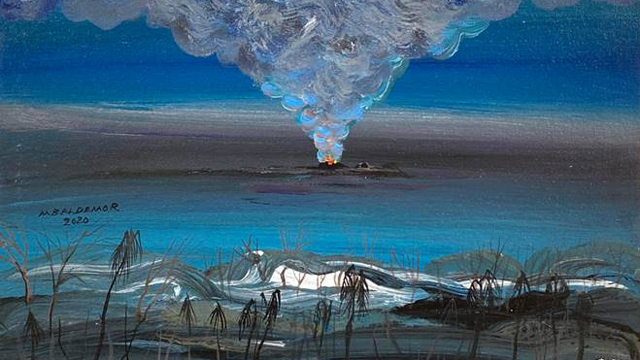 It's happening until March 5.

(SPOT.ph) News of a lava fountain and ash fall from Taal Volcano spread quickly throughout the Metro and nearby provinces on the afternoon of January 12. Families were displaced, horses and pet animals were left behind, and life as the locals knew it was never the same. Filipinos, as always, powered through—and within hours, rescue operations were put in place. More than a month on, those who were directly affected are still recovering. Showing how art can lend a helping hand, Filipino artist Manuel Baldemor is holding an exhibition for the benefit of displaced communities following the Taal Volcano eruption. Bulkang Taal: Bangon Batangas runs until March 5 at SM Mall of Asia in Pasay City.

Hailing from Paete, Laguna, Baldemor was right outside his town's city hall when Taal Volcano erupted. He saw first-hand as the sky was transformed into a towering gray column of smoke. Two weeks later, he traveled to Tagaytay City in Cavite and Talisay in Batangas, seeing how the towns had transformed. The artist tried to capture this turbulent yet solemn scene through paintings, a departure from his signature style of vibrant colors and happy images.

Baldemor has become known for works that often depict Filipino fiestas and traditions, reproduced by the United Nations Children's Fund as greeting cards for use worldwide. His canvases are always filled with orange, red, and green hues, a stark contrast to his latest collection.

Taal Manuel Baldemor Art Sm Mall Of Asia Pasay Seasoned Adventurer Savvy
Your Guide to Thriving in This Strange New World
Staying
In? What to watch, what to eat, and where to shop from home
OR
Heading
Out? What you need to know to stay safe when heading out