Ang Huling El Bimbo's Original Cast Recording Album Is on Spotify
Loading
Already a member? Log in
No account yet? Create Account
Spot.ph is your one-stop urban lifestyle guide to the best of Manila. 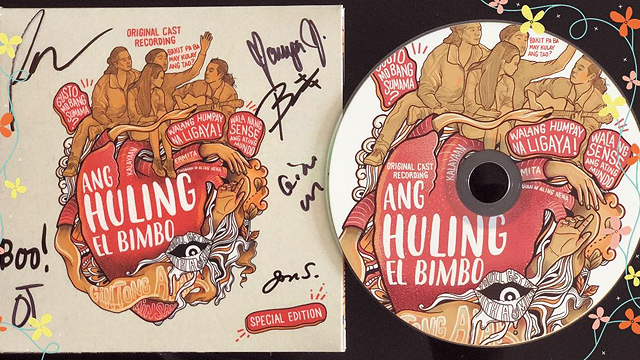 BRB, we're turning up the volume.

(SPOT.ph) Crowd-favorite Ang Huling El Bimbo, an all-original Filipino musical told through songs by Eraserheads, is down to its last three weekends—and we can't help but feel sad and sing our hearts out as it finishes its final run. It's a good thing that Full House Theater Company, which is behind this sold-out show, announced in the morning of August 2 that they just dropped five tracks from the Original Cast Recording Album on Spotify. The first four songs were uploaded online on July 26, making it a total of nine available tracks.

If you want to get a copy of the full album, which has 14 songs by the original cast and a bonus track from the new cast, just pass by the Resorts World Manila Redemption Store. This was made available for sale starting on March 1.

Ang Huling El Bimbo, a musical written by Dingdong Novenario and directed by Dexter Santos, follows the story of three friends: Hector, Emman, and Anthony, who find themselves in an unlikely mini-reunion 20 years after their college graduation. Their younger selves are revealed in a slew of flashback scenes, starting from how they met in a dormitory to how they parted ways on the last day of school. Along the way, things take a different turn in the life of their friend, Joy.

Currently onboard as cast members are Magdangal and David Ezra as Hector, Mariano and Myke Salomon as Emman, Santos and Rafa Siquion-Reyna as Anthony, Menchu Lauchengco-Yulo and Carla Guevara Laforteza as Joy, Atadero and Bibo Reyes as Young Hector, Gabunada and Vic Robinson as Young Emman, Lance Reblando and Phi Palmos as Young Anthony, Manalang and Gab Pangilinan as Young Joy, and Francisco as Tiya Dely.

Salomon also takes the role of the show’s musical director.

UPDATE (August 17, 2019): The whole Original Cast Recording Album is now available on Spotify with all 15 tracks.