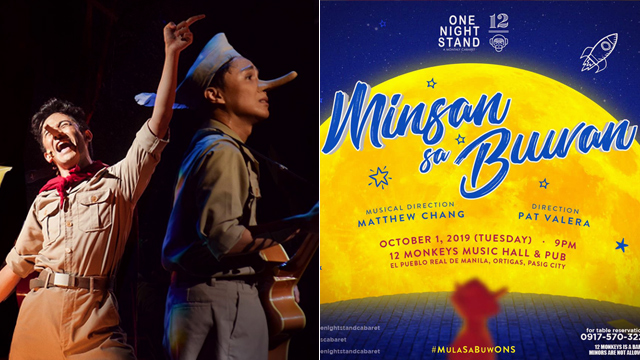 For One Night Only: Mula sa Buwan Cast Performs Their Well-Loved Songs

Tables and seats are running out fast!

(SPOT.ph) Mula Sa Buwan, a musical written and directed by two-time Palanca awardee Pat Valera, is one of Philippine theater's most applauded theatrical shows in recent years. It premiered in December 2016, had a rerun in February 2017, and had a restaging in November 2018. Most of us were saddened upon learning that the third one's the last, but this independent production is returning to the stage—their songs, at least. One Night Stand Cabaret, a monthly series that mounts musical theater cabarets, presents Minsan sa Buwan on October 1, 9 p.m. at 12 Monkeys Music Hall and Pub in Pasig City.

This one-night-only performance is under the musical direction of Matthew Chang with Valera still at the helm. Cast members from 2018, including Nicco Manalo, Boo Gabunada, Gab Pangilinan, Cris Go, Myke Salomon, Rohan Rostata, and Phi Palmos, will be performing songs from and inspired by the musical.

Some of its popular tracks are "Ikaw," "Ang Sabi Nila," and "Matatapos Din." You can listen to some of Mula sa Buwan's songs on Spotify.

Mula sa Buwan is based on Edmond Rostand's Cyrano de Bergerac and Francisco "Soc" Rodrigo's Filipino translation of the French classic. The sarsuwela-esque production is set in 1940s Manila where Cyrano is an ROTC cadet and Roxane is a blushing colegiala. Christian, the lead's best friend, falls in love with the beautiful damsel.

Most seats have already been reserved, and while couches are already fully booked, cocktail tables are still available. Walk-ins (standing) will be accommodated on the day of the performance, but they need to come in before 9 p.m. 12 Monkeys, after all, can only accommodate 300 people. Door charge is at P500.