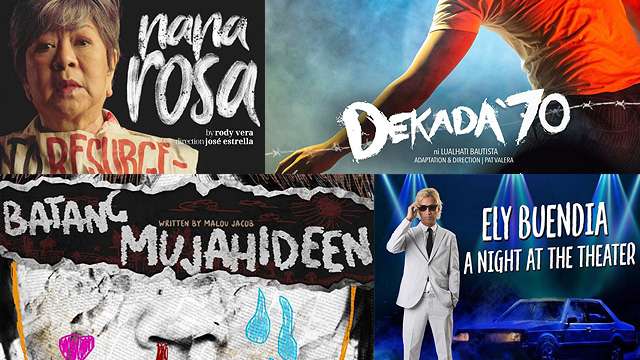 Theater in Manila: Exciting Shows to See Onstage This February

It includes a music gig and theater crossover!

(SPOT.ph) For theatergoers, the year starts in February, not in January when theater companies are still gearing up for the upcoming season post-Christmas holidays. And probably because it’s National Arts Month, the second month of the year is often booked with back-to-back gala nights and show openings. You may find yourself seeing up to three shows in a week just so you can catch all the performances it has to offer. For February 2020, we are gifted with gut-wrenching advocacy plays and funny ones to help us catch our breath.

Here are the shows we’re excited to see this February:

Ely Buendia: A Night at the Theater

Due to insistent public demand, Ely Buendia returns to the stage with the cast of Ang Huling El Bimbo for Ely Buendia: A Night at the Theater. If you've seen Ang Huling El Bimbo, a musical told through the songs of Eraserheads, then you might be familiar with its story: Three friends from college come together in an unlikely reunion and look back at how their lives have changed. In A Night at the Theater, Buendia pretends to be part of the gang—as himself—and sings a few songs with the cast. Gian Magdangal, OJ Mariano, Jon Santos, Carla Guevara Laforteza, Reb Atadero, Boo Gabunada, Topper Fabregas, and Tanya Manalang join this special staging.

Ely Buendia: A Night at the Theater (The Repeat) is on February 20, 8 p.m. at Newport Performing Arts Theater, Resorts World Manila, Newport Boulevard, Pasay City. Tickets, priced from P1,800 to P7,500, are available through Ticketworld.

The Philippine komedya, which flourished during Spanish times, once served as a propaganda tool for Christianization as it portrayed the conflict between Christians and Muslims—with the latter usually defeated in combat or converted into Christianity. While this theater tradition is being revived by community theater groups, it is also becoming more politically correct, as in the staging of Senadala at Persyanus—a story of two mythical kingdoms and how they're healed by love. Jess Nazarene DC Macatuggal pens and directs this production by Komedya ng Don Galo.

Senadala at Persyanus is on February 21, 10 a.m. and 3 p.m. at Tanghalang Huseng Batute, Cultural Center of the Philippines, Roxas Boulevard, Pasay City. Tickets, priced at P250, are available through Ticketworld.

Under My Skin, which is written by Rody Vera and directed by Melvin Lee, is part of Philippine Educational Theater Association's campaign to use theater in raising awareness and starting conversations in national issues, such as HIV and AIDS. It follows Dr. Gemma Almonte, an epidemiologist who reveals not only the facts and figures surrounding this disease, but also the stories behind the characters who are living with HIV.

Under My Skin runs until March 22 at PETA Theater Center, 5 Eymard Drive, New Manila, Quezon City. Tickets, priced from P800 to P1,800, are available through Ticketworld.

Batang Mujahideen follows the story of a seven-year-old Yakan, Fatima, who witnesses the kidnapping of priests, teachers, and students in Basilan by the Abu Sayyaf. She is later recruited by the mujahideen and trained to be a child warrior. It is written by Malou Jacob and directed by Guelan Luarca.

Batang Mujahideen runs from February 21 to March 8 at Tanghalang Huseng Batute, Cultural Center of the Philippines, Roxas Boulevard, Pasay City. Tickets, priced from P1,000 to P1,500, are available through Ticketworld.

Itim Asu and Other Dances

Ballet Philippines restages Itim Asu, a contemporary dance choreographed by National Artist Alice Reyes based on Virginia Moreno’s award-winning drama The Onyx Wolf. It revolves around the story of Luisa (a.k.a. La Loba Negra), wife of Spanish Governor General Bustamante, as she seeks revenge for the murder of her husband. Bustamante was a whistleblower who revealed corrupt practices during the Galleon Trade, for which he was assassinated and silenced. The Reyes masterpiece was first performed in 1970 at the Cultural Center of the Philippines.

Itim Asu and Other Dances runs from February 21 to 23 at Tanghalang Nicanor Abelardo, Cultural Center of the Philippines, Roxas Boulevard, Pasay City. Tickets, priced from P1,000 to P1,500, are available through Ticketworld.

After a sold-out run in February 2019, Nana Rosa—written by Rody Vera and directed by Jose Estrella—returns to the stage. The play follows the life of Maria Rosa Henson, who was the first Filipina to publicly come out as a "comfort woman." It explores issues of women's rights, understanding history, and the atrocities of war.

Trumpets makes a comeback with the restaging of its longest-running musical, Joseph, the Dreamer. This bible story stars Sam Concepcion in the title role, with Paolo Valenciano at the helm and Myke Salomon as musical director.

Dekada '70, Pat Valera's musical adaptation of Lualhati Bautista's 1983 novel, first ran in Ateneo de Manila University's Doreen Black Box Theater in September 2018—just in time for the 46th anniversary of late dictator Ferdinand Marcos' declaration of Martial Law. With history seemingly repeating itself these days, what better time to restage this masterpiece? Dekada '70 gives us a glimpse at how a middle-class family, despite not being directly affected by the atrocities of the Marcos regime, chose to fight alongside their fellow Filipinos and reclaim democracy.

Theater Musical Play Pasay Makati Quezon City Bonifacio Global City Savvy Seasoned Guide
Your Guide to Thriving in This Strange New World
Staying
In? What to watch, what to eat, and where to shop from home
OR
Heading
Out? What you need to know to stay safe when heading out