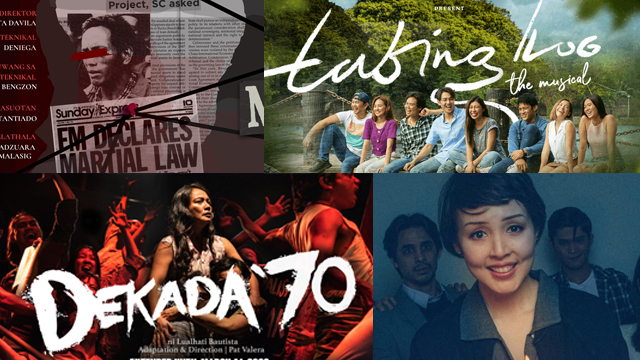 These Theater Shows in Manila Have Been Canceled for the Week

As a safety precaution!

(SPOT.ph) As the coronavirus spreads across the globe—the Philippines included, the public is encouraged to stay home and avoid crowded places as much as they can. This meant closing down schools within Metro Manila, imposing a travel ban in high-risk countries, and canceling big events like the Panagbenga Festival in Baguio and Art in the Park in Makati. Theater companies, especially university-based ones, have also decided to forego all shows for the week and onwards.

Take note of the following show dates that have been canceled or postponed:

The limited restaging of Dekada '70 opened on February 21, and was poised for a four-show extension from March 12 to 14 at the Doreen Black Box Theater at Ateneo de Manila University. But on March 10, 9 p.m., Black Box Productions decided to postpone the last four remaining shows "in light of our current public health situation." The staging of these will instead be moved to September or October.

Teatro Kapamilya announced that "this week's performances of Tabing Ilog, The Musical will be rescheduled." It opened on March 7 with shows from Wednesday to Sunday at ABS-CBN's Dolphy Theater in Quezon City.

Ateneo Blue Repertory's Next to Normal is canceling all shows from March 11 to 18 at the Gonzaga Fine Arts Theater in Ateneo de Manila University. The American rock musical by Brian Yorkey and Tom Kitt opened on March 6 and was scheduled to run until March 22.

Following class suspensions, Ateneo Entablado's Macli-ing Rebista is also canceling shows from March 10 to 18. An adaptation of Malou Jacob's Macli-ing, the play is scheduled for a three-week run from March 3 to 21 at the Fine Arts Annex - Black Box Theater at Ateneo de Manila University.

Nana Rosa, a play by Rody Vera based on the first Filipina to publicly come out as a "comfort woman" during the Japanese occupation, is postponing all shows from March 12 to 15. The show opened on February 27 at Wilfrido Ma. Guerrero Theater at the University of the Philippines - Diliman, and was expected to close on March 22.

Every Brilliant Thing and Lungs

The management of Philippine Educational Theater Association has also decided to postpone five shows in response to the current situation. These are: March 12, 8 p.m.; March 13, 8 p.m.; March 14, 3 p.m. and 8 p.m.; and March 15, 3 p.m. Ticketholders can contact the production through 0917-539-1112 or Ticketworld through 8891-9999 for rescheduling. Under My Skin opened on February 7 at the PETA Theater Center in Quezon City.

The Band's Visit, which stars Menchu Lauchengco-Yulo, cancels its whole run from March 13 to 28 at the Carlos P. Romulo Auditorium. "We pour our hearts, minds, and energies into our shows and we wish there were some other way to handle this," Atlantis Theatrical said in a statement released on March 12.

Atlantis Theatrical also decided to cancel Oliver!, which was scheduled to open in June. "This novel coronavirus outbreak is serious and we simply cannot work as closely with each other as we need to or, more importantly, ask audiences to gather to watch us," the production added.

In a press release sent out on March 13, Repertory Philippines announced that they are canceling all performances of Anna in the Tropics, which was scheduled to open Friday evening. "We are saddened by this cancellation. Our director and friend, Joey Mendoza, has given so much of himself to make this production come to life. And what a spectacular show it would’ve been!," the statement said.

The "community quarantine" raised over Metro Manila also impeded rehearsals for Repertory Philippines' Carousel, which was originally scheduled to open on May 1. The show is being rescheduled for July or August.

Matilda, The Musical, which opened on March 5, has performed their last show in Manila on March 12. With the "community quarantine" over Metro Manila, GMG Productions decided to cancel all shows from March 13 onwards. The international tour was supposed to run at The Theatre at Solaire until March 22.

Theater Musical Play Quezon City Adventurer Savvy Tpc-000001
Your Guide to Thriving in This Strange New World
Staying
In? What to watch, what to eat, and where to shop from home
OR
Heading
Out? What you need to know to stay safe when heading out