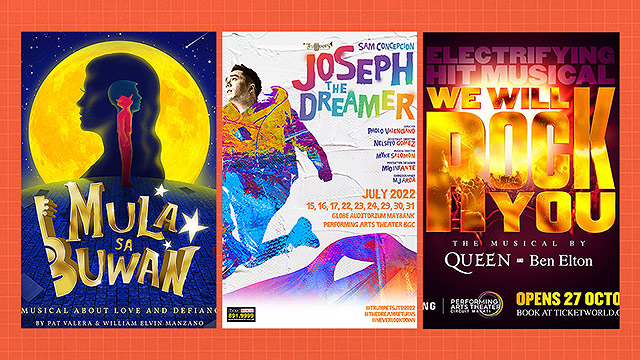 Theater Is Back: Plays and Musicals You Can Catch Live This 2022

Tickets are selling out fast!

(SPOT.ph) When the pandemic hit in early 2020, no one was prepared for what was to come. Restaurants, cinemas, schools, offices, and theaters were closed; and everyone had to resort to online services—whether for delivery, classes, or shows. And after two years, the whole world is slowly (but carefully) reopening. This includes the return of live theater.

Yes, the theater is back. And here are Filipino plays and musicals you should not miss:

The Virgin Labfest, which was established in 2005 has been known to mount "untried, untested, [and] unstaged" one-act plays at the Cultural Center of the Philippines' Studio Theater (a.k.a. Tanghalang Huseng Batute). Directors, writers, and actors had to adapt amid the pandemic when the festival had two consecutive virtual runs. Finally, the shows have returned in front of a live audience with back-to-back runs from June 16 to 26. Seats are limited, so tickets ran out as soon as they were released online. To make up for it, The Virgin Labfest is having online streaming from June 30 to July 10 through Ticket2Me.

The Virgin Labfest runs until June 26 at Tanghalang Huseng Batute, Cultural Center of the Philippines, Roxas Boulevard, Pasay City. Tickets are sold out.

Joseph, the Dreamer was the last staged from February 21 to March 8, 2020—just before restrictions were imposed in Metro Manila—at the Maybank Performing Arts Theater in Bonifacio Global City. But it's actually a modern version of Trumpets' longest-running musical, which first ran in 1989 with Audie Gemora in the titular role. He starred in the musical for a whole decade before having Gary Valenciano as his alternate in 1999. Fast forward to 2020, Valenciano's son—Paolo—directed a fresh (and dance-filled) take on Joseph, the Dreamer with Sam Conception playing Joseph. For the 2022 restaging, Concepcion is reprising the role.

Hit Filipino musical Mula sa Buwan is officially returning onstage with a 13-show limited run from August 26 to September 11 at the newly constructed Samsung Performing Arts Theater in Circuit Makati. It is based on Edmond Rostand's Cyrano de Bergerac and Francisco "Soc" Rodrigo's Filipino translation of the French classic. The sarsuwela-esque production is set in 1940s Manila, where Cyrano is an ROTC cadet and Roxane is a blushing colegiala. Myke Salomon stars as Cyrano, Gab Pangilinan returns as Roxane, and Markki Stroem plays the role of Christian for the first time.

Anak Datu, a Tausug musical, is based on a story written by National Artist of the Philippines for Sculpture Abdulmari Asia Imao in 1968, the same year his son and artist Toym Imao was born. It explores the lives and struggles of the Tausugs in Mindanao amid the political turmoil and insurgency on the island that gave birth to the Moro National Liberation Front.

Anak Datu runs from September to October at the Cultural Center of the Philippines, Roxas Boulevard, Pasay City. For updates, follow Tanghalang Pilipino on Facebook.

We Will Rock You

International production, We Will Rock You, is making its way to the Philippines on October 27. The jukebox musical told through songs by British rock band Queen tells the story of a group of Bohemians living for free thought, no-holds-barred fashion sense, and all-original live music in a futuristic setting where rock-and-roll doesn't exist. It features 24 of Queen's smash hits, including "Killer Queen," "Under Pressure," "We Are the Champions," "Radio Ga Ga," "I Want to Break Free," "Don’t Stop Me Now," "Bohemian Rhapsody," "Another One Bites the Dust," and "We Will Rock You."

We Will Rock You runs from October 27 to November 20 at Samsung Performing Arts Theatre, Hippodrimo Street, Circuit Makati, Makati City. Tickets, priced from P2,539.20 to P6,348, are available through Ticketworld.

Repertory Philippines revealed in April that Rodgers and Hammerstein's Carousel is set to be staged live in November. It was originally scheduled to open on May 1, 2020, with the intention of rescheduling in July or August in the same year—which, of course, didn't happen. Details have yet to be disclosed on whether or not Gian Magdangal and Nikki Gil will still be playing Billy Bigelow and Julie Jordan.