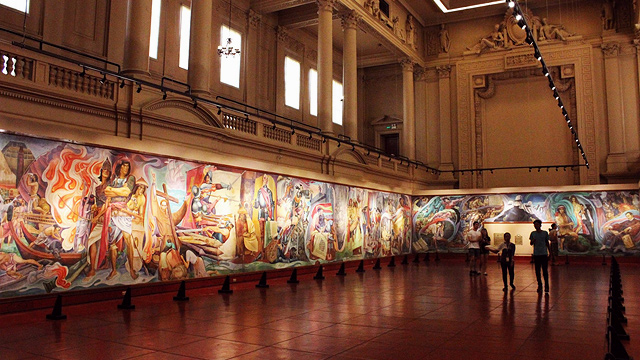 (SPOT.ph) Carlos "Botong" Francisco is one of the most revered artists in the Philippines. A poet and artist from Angono, he "single-handedly revived the forgotten art of mural" as cited by the National Commission for Culture and the Arts in a description about the National Artist for Painting. So it doesn't come as a surprise that everyone wants a piece of him—including former Manila mayor and Buhay Partylist Rep. Lito Atienza. The solon "filed a resolution calling for an immediate Congressional Inquiry into the whereabouts of [Botong's] masterpiece" early this week.

The series of paintings were commissioned for the Manila City Hall by fomer mayor Antonio J. Villegas, which—according to Atienza—makes the "priceless obra maestra" the property of the City of Manila. As it turns out, the work he's referring to, "Filipino Struggles Through History," is at the National Museum of Fine Arts, and has been there since 2013.

From the Manila City Hall to the National Museum

"Filipino Struggles Through History" was originally placed on the walls of the Bulwagang Gat. Antonio Villegas, formerly Bulwagan ng Katipunan inside the Manila City Hall. Water seepage from busted pipes in the upstairs room damaged the mural; and in 2012, the Department of Tourism donated P20 million to the city for the restoration of the piece.

In a 2018 Facebook post by the National Museum (NM) of the Philippines, it was stated that: "The paintings, which had deteriorated and suffered damage through the decades, were removed from Manila City Hall in January 2013, at the urgent request of [then] mayor Alfredo S. Lim." This decision was made upon the recommendation of the former mayor's adviser on culture and former NM director Gemma Cruz Araneta. The piece went through "painstaking restoration" for two years.

In 2017, an agreement between then Mayor Joseph Ejercito Estrada, the Manila City Council, and the National Museum "allowed the original paintings to remain [within the premises] for enhanced public access and appreciation." It is also the practice of the museum to provide "museum-quality reproductions" of pieces that were displaced from their original location.

After years of restoration, "Filipino Struggles Through History" was put on display at the National Museum of Fine Arts. It was made available for viewing starting in February 2018 as a major highlight of the museum's commemoration of the National Arts Month that year. More than a year on, the piece is still a crowd favorite among museum-goers.

"Filipino Struggles Through History," according to the National Museum, is
"arguably Botong’s greatest extant work of art" and among his last, as it was finished in 1968—only months before his death on March 31, 1969. It was originally called the "History of Manila," and was indeed commissioned by Villegas.

In 1996, it was declared a National Cultural Treasure, which means that it is "a unique cultural property found locally, possessing outstanding historical, cultural, artistic and/or scientific value which is highly significant and important to the country and nation."

The massive Botong piece, which is a series of four paintings, measures 65 meters and is divided into 10 panels. The first seven panels, which are on display at the Old Senate Session Hall, tell the story of how Manila flourished from being a colony of the United States to its independence in 1946. The last three panels, which are located at the museum’s Vicente and Carmen Fabella Hall (Gallery XIII), shows "Mayor Villegas’ progressive vision for the City of Manila, grounded on a proud past of Filipino leadership and the fervent nationalism that he himself vigorously promoted and is well-remembered for," according to the National Museum.

We've learned from artists and art conservationists that restoration is never an easy task—especially if it's a piece that can occupy a whole plenary hall. In an acknowledgement plaque placed alongside the Botong display, a detailed history of the restoration was indicated. The project was undertaken upon the initiative of the Department of Tourism, Tourism Infrastructure and Enterprise Zone Authority, Government of the City of Manila, and the National Museum. It was facilitated by Lourel Design and Construction, Inc. with monitoring and supervision of the Chemistry and Conservation Laboratory Division of the National Museum.

The conservation work was also overseen by former councilor Ali Atienza, son of the older Atienza, as indicated in another Facebook post by the National Museum in August 2013. “He was assured by NM director Jeremy Barns that the painting is indeed in the Museum premises, undergoing treatment. He was also supplied with the documents that enabled the temporary transfer of the 65-meter National Cultural Treasure painting to the NM while it goes through the process of making them last beyond our lifetime. This laboratory was also visited last Friday by former Manila mayor Alfredo Lim and vice chairperson of the Manila Historical and Heritage Commission Gemma Cruz,” the statement further said.

The restoration was completed in 2015.

Returning the Piece to Manila

"Huwag ninyong angkinin ang hindi sa inyo. Nobility of intention does not justify an illegal act […] The tarp copycat that was installed in place of the original is insulting to Manileños and we cannot allow this to continue," Atienza added.

But considering the foot traffic within the Manila City Hall, is this really a good idea?

"Actually, keeping it in the NM will be a very good option for proper care, just like the four paintings from [the Philippine General Hospital]," Museum Foundation of the Philippines President Albert Avellana tells SPOT.ph.

The National Museum of Fine Arts (formerly known as the National Art Gallery) is along Padre Burgos Avenue at Rizal Park, Manila. It is open from 10 a.m. to 5 p.m. (Tuesday to Sunday). For more information, follow National Museum on Facebook.