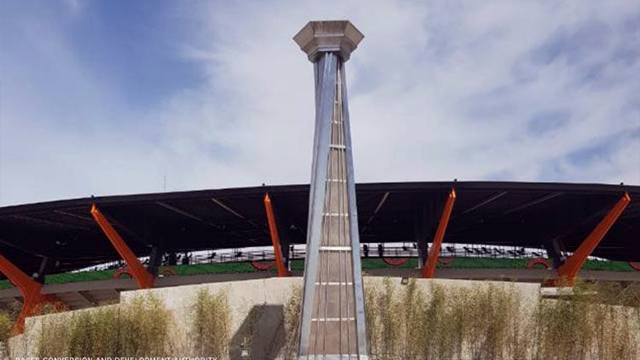 He added that Mañosa "can turn coal into a diamond."

(SPOT.ph) Photos of the P50-million cauldron built at the New Clark City Sports Hub for the upcoming 30th South East Asian Games made its rounds online on November 18, and people had a lot to say. Senate Minority Leader Franklin Drilon pointed out how the money could have provided for 50 classrooms instead. But House Speaker and Philippine Southeast Asian Games Organizing Committee chair Alan Peter Cayetano insisted that "it's a work of art" and President Rodrigo Duterte justified that "it is the rendition of the mind of the creator." But is that enough to spend millions of pesos? Multimedia artist Toym Imao, known for the designs of the Tandang Sora National Shrine and Andres Bonifacio National Shrine and son of National Artist for Sculpture Abdulmari Asia Imao, weighed in on the issue through a Facebook post.

"First things first, let us not crucify the designer, or dabble on the artistic merits of his design," he started, referring to National Artist for Architecture Francisco "Bobby" Mañosa. The government claimed that the late architect was commissioned to design the cauldron before his death in February. Spanning a career of more than six decades, Mañosa was behind the design of the Our Lady of Peace Shrine along EDSA, Tahanang Pilipino (Coconut Palace) within the Cultural Center of the Philippines Complex, and the La Mesa Watershed Resort and Ecological Park in Quezon City. "He has developed a legacy of Philippine architecture, which is essential to our Filipino identity and at the same time, deeply appreciated and shared in our world today," cited the National Commission for Culture and the Arts about the National Artist.

Imao emphasized that "it was the administration's call via its organizing representatives to spend above P50 million for the cauldron. The organizers could have capped the budget by even half that amount if it wanted to without sacrificing its intent for the design to be grand and iconic. Any good designer for that matter can design within budgetary limitations and still come up with 'a work of art.' He added, "There are 1,001 ways to address a design problem, and the late National Artist Bobby Mañosa was a master. One who can turn coal into a diamond, he has worked with indigenous materials throughout his career and designed them into structures and created masterpieces. Surely if the organizers have given him the challenge to design on a budget, he could still come up with a genius design solution without sacrificing aesthetics."

According to the breakdown of the government’s budget, P4.4 million went to Mañosa’s architecture firm, Mañosa & Company, Inc. Some P32 million went to the construction of the three-meter wide cauldron while P13.4 million went towards the building of the foundation. Cayetano added that this budget also included provision for fuel, which would keep the flame lit round-the-clock for 11 days.

“This cauldron was intended to symbolize passion, pride and the spirit of the games, but unfortunately now, it means something else. It has come to represent the excesses of this administration and the corruption that plagues the six billion peso plus price tag of the hosting. Neither the commissioning agency nor the artist can impose or dictate the interpretation, relevance, and meaning of a public artwork once it is ‘installed’ in the public domain,” Imao continued.

He concluded his statement with a plea to "not train our guns towards the designers, artists, and creative," but to "scrutinize the budget and how it was spent" and "make the organizers and concerned government officials accountable for any irregularities and corruption that may discovered and revealed."