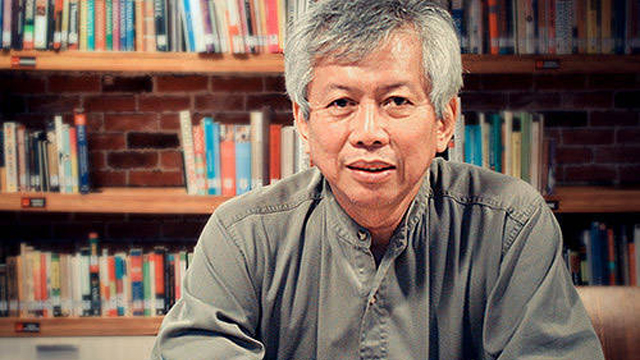 It's going to be a poetry and music night.

(SPOT.ph) Jose F. Lacaba (a.k.a. Pete Lacaba) is one of the many writers and journalists who protested against the dictatorship of Ferdinand F. Marcos through—as cliché as it may sound—the power of the pen. His brave pieces, both in verse form and journalistic writing, were instrumental in pushing for change during the height of the Martial Law. And now, the people moved by Lacaba's works are set to hold a poetry and music night to raise funds for his medical expenses. Kape't Ka Pete: Unang Sigwa ng Salin-awit at Tula ni Jose Lacaba is happening on March 7, 6 p.m. at Kamuning Bakery Café in Quezon City. Tickets are at P250.

Lacaba, who was part of the underground press in the '70s, had a protest poem published under a pen-name in state-allied Focus Magazine. It should be noted that Marcos clamped down on free press and any form of dissent was met with capture and torture. But Lacaba, crafty as he is, was able to do so anyway: “Prometheus Unbound,” which at first glance seemed an innocent, non-political poem inspired by Percy Bysshe Shelley’s four-act drama, was read by the public—most of whom figured out that the first letters in each line of the acrostic poem spelled out: “Marcos Hitler Diktador Tuta.” He never admitted to having written “Prometheus Unbound,” at least not until the dictator was overthrown, but he was still imprisoned and tortured at Camp Crame in 1974 for being part of a band of writers and artists who protested against the Marcos dictatorship.

“Lacaba has been suki of Kamuning Bakery Café due to late actress Nida Blanca, who brought him there. I suggested that I will ask writer friends to hold a tribute dinner—funds raised all to be given to him, he agreed,” Wilson Lee Flores—owner of the 81-year-old bakery—tells SPOT.ph about the upcoming event. He later met with the restaurant’s patrons, poet Vim Nadera, novelist Charlson Ong, journalist Nestor Cuartero, and Narciso Chan of Curve Entertainment to jumpstart the project. Artists who have committed to perform include singers Noel Cabangon, Cookie Chua, Hazel Faith, and Skarlet Brown; poets Gemino Abad, Butch Dalisay, Krip Yuson, Vim Nadera, Michael Coroza, and Marne Kilates; and many more. Local publishers are also expected to sell books during the song and poetry night.

“If we could raise funds [for Lacaba], [we might be able to] establish a writers’ fund to assist all writers and journalists in need,” Flores says.

Pete Lacaba Martial Law Poetry Kamuning Bakery Cafe Quezon City Adventurer Savvy Seasoned
Your Guide to Thriving in This Strange New World
Staying
In? What to watch, what to eat, and where to shop from home
OR
Heading
Out? What you need to know to stay safe when heading out