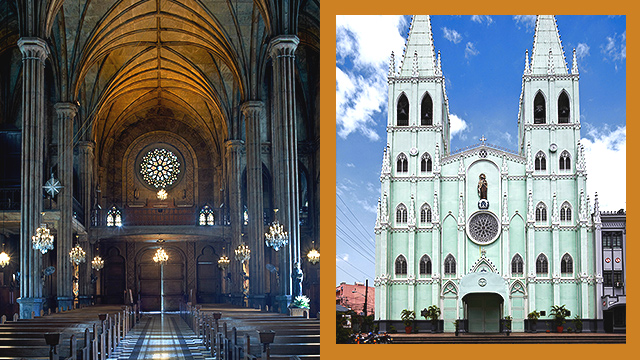 (SPOT.ph) Despite a host of petitions and legal proceedings that carried on for five years, efforts to stop a 46-storey condominium from being built behind the Luneta Park were for nothing. The high-rise effectively destroyed the sightline of the national monument, which is why it was eventually dubbed "pambansang photobomber." Now, another condominium project, this time behind the San Sebastian Basilica in Quiapo, Manila, is threatening not only to mar the sightline but also the structural integrity of the  church and the lives of the local communities surrounding it.

Concerned heritage groups, in collaboration with the Order of Augustinian Recollects and San Sebastian Basilica Conservation and Development Foundation, launched the #SaveSanSebastian campaign as a public call for support for the ongoing restoration and protection from construction projects surrounding it.

"Our problem is more than a photobomber. Under the #SaveSanSebastian campaign, the Foundation focuses on the need to protect the architectural and structural integrity of the Basilica and the surrounding homes in the neighborhood—both of which directly affect the lives of the residents. Again, it's the community and their safety that is at the heart of this issue, which guide the decisions made by the team alongside the data of our engineers and architects," the Foundation said in a statement on January 18.

#SaveSanSebastian's main campaign for now is an online signature drive that was launched on January 7 on Change.org. It has since gathered more than 20,000 names, with a goal of 400,000 signatures by August 2021. The goal is a direct nod to this year's 400th anniversary of the very first structure of San Sebastian Church, built in 1621. The movement has earned the support of the Manila Cathedral and Quiapo Church.

The campaign also encourages the public to show their support by sharing their own stories and reasons to save the Basilica while using the hashtag. This is aimed at leading up to the 400th anniversary celebration.

San Sebastian Basilica is best known for being an architectural wonder as an all-steel building. Aside from its unique composition, it was also designed in the Neo-Gothic style at a time when the rest of the Spanish-era churches all had Baroque influences.

The construction of the San Sebastian Church that we know today started in 1881, but it took 10 years to build. Manila Director of Public Works Don Ganero Palacios y Guerra, a Spanish architect, volunteered his services to design the structure. He was joined by the Belgian Societe Anonyme de Travaux Public as the general contractor, which was also behind the construction of the Orient Express, the famed long-distance train service that ran from Paris to Istanbul, as well as the Museo Nacional de Ciencias Naturales in Madrid, Spain. Two Belgian foundries served as subcontractors for the metal materials, the German studio Henri Oidtmann created the stained glass windows, Frenchman Magin Pers worked on the structure’s foundations, and Frederick Henry Reade Sawyer of Great Britain served as the foreman.

It was declared a Philippine Historical Landmark in 1973 and a National Cultural Treasure in 2011. But the passage of time (and numerous typhoons) led to the structure’s rusting and corrosion, to the point of almost crumbling.

The cultural treasure's slow deterioration is also evident in the figural paintings that adorn the walls . When you look closely, some of the figural paintings have lost their vibrant colors, some have blurred, and some just completely faded. This is because rust has formed inside the columns and double walls of the whole church.

The San Sebastian Basilica Conservation and Development Foundation (SSBCDF) took on the challenge of restoring the structure to its former glory. Tina Paterno—a building conservator who was formerly based in New York City—led a restoration program for the Basilica that started in 2012. They have since completed assessment, embarked on emergency repairs, and put up a shoring system to fortify the building's foundation. Their day-to-day tasks are all documented online.

Also read: It's Time You Saw a Different Side of Quiapo

Threat of a New Photobomber

But the restoration efforts are again currently under threat.

The controversial construction of the 32-storey condominium behind the Basilica was first raised by heritage news source El Reportero in September 2020, who claimed that "heritage stakeholders in Quiapo were not consulted by the developer." Construction commenced in July 2019 following clearance issued by the National Commission for Culture and the Arts. The National Historical Commission of the Philippines and National Museum of the Philippines also did not object to the project. The arts agency advised the developer to secure the stakeholders' approval, which reportedly did not happen according to SSBCDF.

Following this, the Foundation immediately requested for clarification from the three national agencies regarding the monitoring that "the developer will not damage the architectural and structural integrity of the Basilica", and to have damage assessment carried out before construction. Individual letters were sent on September 28, 2020, copies of which were also made available online.

As of January 9, the Foundation's legal team is seeking clarifications and updates from the National Historical Commission of the Philippines, especially since the resumption of drilling and piling at the construction site is causing ground vibrations that "adversely affect the ongoing restoration efforts in San Sebastian Basilica."

San Sebastian Basilica Manila Quiapo Heritage Adventurer Savvy Seasoned City Life
Your Guide to Thriving in This Strange New World
Staying
In? What to watch, what to eat, and where to shop from home
OR
Heading
Out? What you need to know to stay safe when heading out