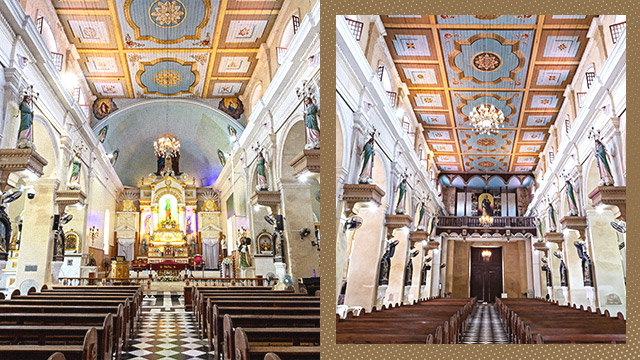 With a bit of occult symbolism. Ever heard of St. Catherine of Alexandria?

(SPOT.ph) The southern half of Cebu is home to some of the oldest churches in the Visayas. Among the most famous include the Our Lady of Patronage Parish Church in Boljoon and the churches in Argao and Samboan, both of which are dedicated to St. Michael the Archangel. With their fortress-like Earthquake Baroque designs and single belfries—named so because they’re intended to withstand powerful tectonic activity but at the same time reach out to the heavens—these houses of God share a particular look that has since become a template of sorts of how we imagine Spanish-era parishes. There’s one church in the area though that boasts a rather distinct appearance thanks to its blend of several architectural styles and interior furnishings—drawing from both east and west, and perhaps even the occult.

Also read: 10 Heritage Churches for a Pilgrimage Across the Visayas

Located in the historic city of Carcar, about 40 kilometers south of Cebu City, is St. Catherine of Alexandria Church. The area where the church stands is already unique on its own. Whereas most Spanish-era Visayan churches were constructed close to the coast (likely to better facilitate Christianity’s indoctrination among a seafaring and sea-revering people), St. Catherine’s stands high up on a hill, overlooking the rest of the city.

From Pirate Refuge to Full-fledged Parish

There’s a fascinating, though spottily recorded, history behind Carcar’s elevated, inland location. According to Angels in Stone: Augustinian Churches in the Philippines by historian Pedro Galende, the original settlement in the vicinity, formerly called Sialo or Siaro, was situated much closer to the coast, in an area now called Valladolid. Frequent pirate raids, however, forced the residents to relocate further inland. The new site was initially called Kabkab (derived from a tall fern tree that grew abundantly there) before eventually being hispanized into Carcar.

As with all religious missions in Cebu in the early Spanish period, administration of Carcar was handled by the Augustinians. The area was first covered by the Santo Niño parish in 1599, and then the San Nicolas parish in 1611. Not long after, on April 29, 1617, Carcar was established as its own parish. Continued pirate raids, natural calamities, and the generally unspectacular condition of Cebu’s economy throughout the 17th and 18th centuries hindered the construction of any long-standing buildings, including a stone church. By the 19th century, however, Cebu’s economy began to pick up with the cultivation and export of cash crops such as sugar, copra, and abaca. This boom brought with it infrastructure projects for places like Carcar.

It’s unclear when exactly construction of the present coral stone church began. The University of Hawaii Manoa’s Center for Philippine Studies claims construction started in 1859, with completion following six years later. Galende, on the other hand, pegs the church’s completion to 1875, with construction going as far back as a decade earlier. Adding to the confusion is the fact that one of the two bells is inscribed with the year 1810, suggesting the possibility that church construction may go back further than initially thought.

As parishioners and visitors approach St. Catherine’s, the first structure they will encounter is the outdoor shrine holding a statue of Christ the King mounted on a pedestal. According to an article by Reuben Cañete for BluPrint, this monument was added to the church complex in 1934. The statue is especially notable—and a nice cosmopolitan touch for this once small-town parish—for having been sculpted by Francesco Riccardo Monti, an Italian expat who resided in the Philippines from 1930 until his death in 1958, and throughout that time collaborated with local sculptors and architects on several projects. Perched atop pillars surrounding the church’s perimeter (and slightly obstructing the view of the facade) are white statues of 14 biblical figures: the 13 apostles, including Judas Iscariot and his replacement, Matthias, as well as St. Paul. Not surprisingly, Judas’s statue stands a fair distance from the others, consequently (and curiously) placing it much closer to the convent, where the priests reside.

St. Catherine’s also features a pair of belfries that support the facade and are each capped by onion-shaped domes, giving the church’s exterior a distinct and instantly memorable mosque-like resemblance. Architectural enthusiasts and local historians have readily pointed out the edifice’s Greco-Roman style, strongly influenced by Islamic architecture. Cañete, however, takes a differing view and argues that the domes’ corners are less mudejar and more Austrian Baroque—a contention with some bearing when you consider the fact that the ruling families of Spain and Austria in the 1800s were related.

The interior of the church is laid out in the form of a basilica, meaning the central nave (the aisle the bride walks down, if you will) leading to the main altar is flanked by two lateral aisles, forming a T, or in some cases, a cross. Looking down on the nave and pews are 18 candelabra-wielding angels, standing on plinths affixed to nine columns on each side. Just a few meters above them is St. Catherine’s famous ceiling, with its century-old murals painted by master artist Canuto Avila in the 1920s. Despite their age and significant deterioration, these murals continue to shine. The dominant blue blesses the ceiling with a pristine, heavenly look, while the framed geometric rosettes, painted in the 3D-like tromp d’oleil fashion, appear to float.

Other connections to Austria (and the fascination for the occult that was prevalent there in the 19th Century) can be found in the main altar’s retablo. The elaborate wooden structure’s adornments include upturned golden palm leaves and sun and moon faces, which, as per Cañete, were quite popular mystical symbols among Vienna-based Freemasons roughly around the same time as the church’s construction. Their incorporation into St. Catherine’s design, a trait shared by many other contemporaneous Austrian parishes, can be said to be an appropriation of symbols otherwise deemed heretical by the Catholic Church.

St. Catherine’s Church as an Archive

Whether it was built in the first or second half of the nineteenth century, or whether its architecture is more Austrian than Islamic, historians and regular Carcar citizens alike will agree that St. Catherine’s Church has proven to be quite the enigma in the present day. No doubt, Carcar has a very rich history, but a good part of that history has also been lost to us over the centuries. Many of these mysteries can likely be attributed to poor record keeping and outright historical neglect for localities considered too rural in a colony at the fringes of a globe-spanning empire.

There may not be much we can do about history from hundreds of years ago already lost and forgotten, but efforts can still be made to preserve what we have today for future generations to appreciate. St. Catherine of Alexandria constitutes a good part of the history of Carcar. This intriguing church is just as much a place of worship as it is a rich archive of Carcar’s past—from its saintly statues that have been welcoming parishioners for several decades now, to its muraled ceiling hovering above churchgoers over the last century. By maintaining these and other integral portions of St. Catherine, local church officials assure Carcareños—as well as the larger Cebu population—that they have an anchor to the past to give them a better sense of their present and future.