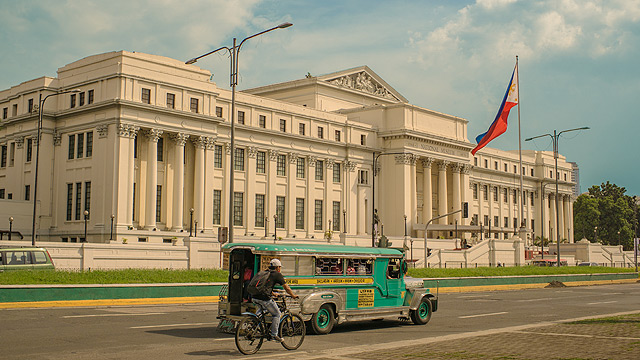 From Congress to the Arts: A Short History of the National Museum Building

The story behind one of Manila's most recognizable buildings.

From Museo-Biblioteca de Filipinas to National Museum of the Philippines

The National Museum, which is the umbrella organization, was initially established as Museo-Biblioteca de Filipinas by a royal order of the Spanish government in 1887. Four years later, the museum opened at the Casa de la Moneda on Calle Cabildo in Intramuros; then later moved to Calle Gunao in Quiapo.

During the American occupation, Museo-Biblioteca de Filipinas was abolished and replaced with the Insular Museum of Ethnology, Natural History, and Commerce in 1901. Three years later, it was renamed the Philippine Museum.

It was only in 1928 that the museum's name came to bear some semblance to its current. The National Museum of the Philippine Islands was created and housed in a building in the Port Area.

By 1945, the National Museum of the Philippines got its final change of name.

National Museum of Fine Arts as the Seat of the Legislature

But plans change, and so what was set to be the National Library of the Philippines became the Legislative Building. The initial architectural design by Ralph Harrington Doane and Antonio Mañalac Toledo was revised by Juan M. Arellano, who added a fourth floor and chambers for legislators. He also changed the central façade and incorporated sculptural work. The Legislative Building officially opened during the Second Regular Session of the 7th Philippine Legislature on July 16, 1926.

In February 1945 at the height of World War II, Japanese forces used the building as a stronghold. The exchange of heavy machinery between them and American forces caused the building's north and south wings to collapse, but the central portion was left standing. After the war, it was used by former President Manuel Roxas during his inauguration as the fifth president of the Philippines and last president of the Philippine Commonwealth under the United States. The post-war Commonwealth Congress convened at the Old Japanese Schoolhouse in Sampaloc as the bicameral assembly alternated in their use of the school auditorium.

The building was rebuilt from 1949 to 1950 with most of its original blueprint maintained. The Congress of the Republic of the Philippines moved back to what became known as the Congress Building (a.k.a. Old Legislative Building).

By 1970, the building—being the home of the Congress—was witness to frequent demonstrations during the presidency of former dictator Ferdinand E. Marcos, Sr.

On January 26, 1970, for example, about 50,000 demonstrators gathered outside the Old Legislative Building to demand reforms in the Constitution and protest against the president's plans to seek a third term. Anti-riot security forces later attacked protesters, reportedly causing injuries to 300 student-activists. Four days after the incident, simultaneous protests were held in front of the Congress and of Malacañang. Security forces once again attacked the demonstrators—four students were killed, 162 were injured, and damages to property reached between P500,000 to P1 million, according to reports.

When Marcos declared Martial Law on September 23, 1972, both chambers of Congress coincidentally closed their sessions. "Several midnight arrests were made which included four senators, several congressmen, and other opposition leaders and journalists, numbering approximately 8,000 individuals," according to the Official Gazette—the public journal and main publication of the government of the Philippines.

Marcos, again according to the Official Gazette, "engineered the replacement of the constitution with a new one." He promulgated the 1973 Constitution just days before the rescheduled reopening of the Congress (under the 1935 Constitution). Legislators reported to the Old Legislative Building on January 22, 1973, but found the building padlocked and under armed guard. The Official Gazette headlines this part of our history as "Congress padlocked under Martial Law, 1972 to 1986."

"Except during the Japanese-sponsored Philippine Republic from 1942-1945, the Congress functioned as the national legislature until September 1972 when President Ferdinand E. Marcos placed the country under martial law," according to the website of the House of Representatives.