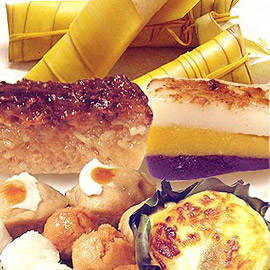 SPOT.ph gives you the dish on the Pinoy kakanin treats that top our list.

Rice turned into a snack becomes kakanin-something a lot of Pinoys love to eat till the next meal. The kakanin remains as constant as rice and as complex as our identity as Filipinos. With simple ingredients like glutinous rice, coconut milk, and sugar, we can turn them into kakanin of unending varieties.

We hear the maglalako (hawker) shout "Puto! Kutsinta!" or honk their wares while balancing tin containers on a shoulder. Market stalls still sell them by the bilao or packaged in neat Styrofoam at the supermarket’s native deli.

Glutinous rice is used to make kakanin instead of the type we cook with our ulam. Calling them cakes may seem misleading but that is what they are-rice cakes that are meant to celebrate our staple food.

This special kind of rice are so prized that early Filipinos offered the best kakanin to the gods as thanksgiving. These are also served in our fiestas, holidays, and other special gatherings. Aside from malagkit rice, we also use cassava, ube, pinipig, and other root crops in making our kakanin.

Filling, sweet, and sticky, here is a sampling of our favorite Filipino kakanin:


Sapin-sapin is a colorful layered rice cake, made from glutinous rice flour, coconut milk and sugar. The best sapin-sapin is the one with a texture so fine it glides and tastes milky. Its colors-violet, yellow and white-makes it more attractive. Latik is sprinkled on the top. Also served with grated coconut.

Origin: From the root word sapin which is Tagalog for "blanket," the name pertains to the layers of rice cake. The best sapin-sapin I’ve tasted was freshly made from the pamilihang bayan of Malabon, also home to many rice cake makers. Gilda Cordero ernando notes that the best sapin-sapin is claimed by all Central Luzon provinces, one of which is Nueva Ecija. She says their ersion is six or seven-layered, creamy, and melt in your mouth.

Interesting layers: To achieve the blankets of kakanin, each layer is steamed until set before the next layer is added. Before the advent of food coloring, Sta. Maria notes the traditional colors were purple (ube), golden brown (brownsugar), and white (white sugar). Some sapin-sapin are sold as several small rectangles of one color each formed in concentric circles.

Sweet basics: A rice cake made from glutinous rice and usually wrapped tightly in leaves. Sta. Maria notes that the leaf wrapper-banana, palm, buri and pandan-varies according to locality. Some can be bought in bunches or in single portions.

Origin: Filipinos have been making the suman since pre-colonial times. We offer it to the gods and as presents to visitors. Antonio Pigafetta, according to Sta. Maria, provides the first description of the rice cakes, which he observed "were wrapped in leaves and were made in somewhat longish pieces."

Sweet basics: Puto is the mother of all kakanin. "Puto is the generic name for a rice cake made from galapong (rice flour), slightly sweetened and steamed," notes Doreen Fernandez. The rice is soaked overnight in water and "ground dry." Its texture is generally heavy and porous. Puto is usually round but can be cut into wedges when steamed in a big bilao.

Origin: As old as suman, the puto is a "Chinese dish shared with Malayans and coastal Philippines," notes Sta. Maria. Puto is served for breakfast or merienda and during Christmas.

Sweet basics: Kutsinta or cuchinta is a steamed rice cake made from ground rice, sugar and lye. The latter, according to Fernandez, gives kutsinta its light brown (almost muddy orange) color as well as its opaque, "jelly-like texture."

Sta. Maria refers to it as "a steamed rice pudding." Kutsinta is usually sold in packs and served with grated coconut. Modern kutsinta are served thickly sliced and topped with latik and langka.

Origin: The ingredients are same as suman and puto so it must exist alongside these
rice cakes though it could be a later concoction. However, the etymology of the word remains sticky. The word and spelling is mysteriously missing from my trusty first edition UP Diksiyonaryong Filipino.

Interesting layers: To get its characteristic round shape (like a tiny plato), kutsinta can be steamed on a muffin pan placed inside a steamer. In 1940, Kapampangans used su-it or "small Chinese porcelain wine cups" to mold the kutsinta, writes Sta. Maria.

Sweet basics: Pichi-pichi is made from cassava (kamoteng kahoy) or cassava flour, water, sugar, lye and pandan for flavor. When steamed, it becomes firm, translucent and golden or light yellow in color like cassava when cooked. The lye makes it chewy and lends a yellow tint. It’s usually shaped in small bite size pieces (or patties) and rolled in grated coconut.

Interesting layers: The Cavite variety is traditionally made with pinipig instead of cassava. Other versions are rolled in cheese (the peachy-peachy version) instead of grated coconut.

Sweet basics: Biko is a kakanin topped with latik (the golden brown curdles that form after rendering oil from coconut cream).  It’s usually made by cooking glutinous rice (sinaing) then boiling it in coconut milk and panocha (or sugar) until dry. Some recipes add pirurutong for color. The biko is cooled in a pan then sliced.

Origins: This rice cake is Chinese in origin.

Interesting layers: Some biko are flavored with anise, ginger or calamansi rind. The shade of the biko depends on the sugar used-white sugar or light brown for a lighter biko, darker sugar for a darker biko.

Sweet basics: The palitaw are flattened oval cakes made from malagkit rice paste, the kind we also shape into bilo-bilo for guinatan. It is boiled in water and scooped out once it rises to the surface. It’s then coated in grated coconut then sprinkled with sugar.

Origins: The name refers to the way the kakanin rises once cooked-its root word is "litaw" meaning to appear or be seen. It’s also known as pepalto in Pampanga, inday-inday in Ilongo, and palutang in Cavite, meaning "to float."

Interesting layers: Because the rice paste is bland, palitaw tastes better when rolled in its
coconut and sugar combination. The white sugar and sesame seeds topping is
a recent invention, so are coarsely chopped peanuts. Because of its name, the palitaw is considered a good luck symbol, notes Sta. Maria.

Sweet basics: Maja blanca is a simple, delicate dessert made with coconut milk, sugar, and cornstarch. The Kulinarya cookbook refers to it as a coconut custard while others call it a pudding.  Because of the ingredients, it’s typically white and topped with latik. Others use toasted grated coconut as topping. Another version is maha de mais, made with corn flour or grated corn kernels which turn it yellow. Food coloring may have been added to enhance its yellowness.

Origins: The name translates to "fair woman," according to Sta. Maria (or "white lady," per Kulinarya).

Interesting layers: Pampanga’s tibok-tibok is similar to maja blanca although richer, creamier and flavored with dayap. In The Governor General’s Kitchen, Sta. Maria describes making maja blanca by cooking rice flour, white sugar and carabao’s milk over low
fire until thick. It’s almost the same as how the tibok-tibok is made. Perhaps the commercial maja blancas in Manila used cornstarch to take the place of the rice flour although some internet recipes contain both.

Sweet basics: Kalámay is usually made from glutinous rice flour, coconut milk and sugar. It has different versions, consistency, texture and packaging depending on location. The one I grew up with was dark brown, chewy (makunat) but not too sticky, very fine textured and acquired the flavor of the banana leaf it was wrapped with. It was about 10 cm thick and cut into triangles.

Origins: The term is synonymous to "sugar" in Ilongo. In Cebu, kalamáy refers to "matamis
na bao." It’s a sweetener for suman, biko and bukayo in Leyte. Records show it to be extant during the Spanish period.

Interesting layers: Variations of the kalamay include kalamay pisalubung, kalamay ubi, kalamay Buna (Cavite), and kalamay hati. The latter is packed in two coconut shells sealed with red strips of what looks like crepe paper.

The kakanin: This festive kakanin is traditionally part of our Christmas table served with
salabat and sold alongside puto bumbong. Bibingka is a round rice cake made with glutinous rice, sugar and coconut milk. It’s placed on a banana leaf-lined pan and baked in a clay oven with the coals underneath and on top. Bibingka is topped with salted duck eggs, kesong puti, sugar and brushed with butter.

Origins: The name "bibingka" is similar to the Indian dessert bebinca from the state of Goa. The latter is made with flour, coconut milk, sugar, egg yolks, ghee or clarified butter and almonds. Aside from Goa, the bebinca is also common in Macau and East Timor, all of which, like Goa, were Portuguese colonies. Aside from the name, both cakes are cooked with heat on top and bottom. But unlike the Philippine bibingka, the Goan bebinca is a layered
dessert wherein each layer must be cooked first before the next one is added (like the way we cook our sapin-sapin). Their bebinca is made with flour instead of glutinous rice.

However, like biko, the term bibingka is Chinese in origin. Anthropologist E. Arsenio Manuel, as cited in Sta. Maria’s book, relates the rice cake’s name to its root word "bi," which in Romanized Mandarin (Pinyin) means "unripe grain."  Bibingka is also used in naming other rice cakes such as bibingkang cassava and bibingkang malagkit.

SPOT.ph wants to know: Which one is your favorite kakanin?

Kakanin Pinoy Kakanin Pinoy Merienda Merienda Filipino Food Filipino Food History
Your Guide to Thriving in This Strange New World
Staying
In? What to watch, what to eat, and where to shop from home
OR
Heading
Out? What you need to know to stay safe when heading out