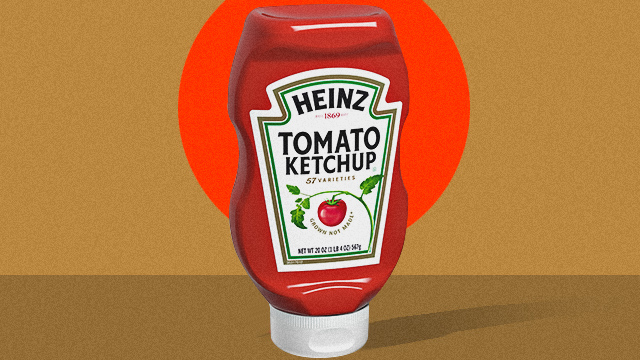 Don't worry, no tomato was harmed.

(SPOT.ph) Ketchup is one of the most beloved condiments around the world. It goes well with a variety of dishes like the classic hotdog, scrambled eggs, and even fried chicken.  And when it comes to this sweet, scarlet sauce, what usually comes to mind is Heinz. Yes, there are a ton of ketchup brands in the market, but more often than not, you'd find a bottle (or two!) of this sweet and tangy condiment in most homes.

Here are nine fun facts that make Heinz ketchup the cool kid on your pantry:

1) There is a way to pour ketchup out of the bottle faster.

2) Two celebrities have a tattoo of Heinz ketchup on their body.

If you thought one celebrity was odd enough already... yup, that's right: two celebrities have a tattoo specifically of the popular brand. Famous singer-songwriter Ed Sheeran has a tattoo of the logo on his left bicep, while Twilight actor Jackson Rathbone has a tattoo of the ketchup bottle on his right leg. They must really love their ketchup!

Glass bottles of Heinz ketchup come with the label "57 varieties" around its neck. While you may think that it holds a particular significance, H.J. Heinz, the company's founder only chose the number 57 to associate with the brand mainly because it stood out to him as lucky.

In 2012, a group of would-be criminals in New Jersey had the bright idea of buying Heinz' classic ketchup and reselling it for a profit using the packaging of the company's premium "Simply Heinz" brand, which is primarily sugar-based ketchup. However, the plan backfired on them when the fermented sugar of the repackaged ketchup mixed with the tomato and vinegar acids, resulting in a lot of exploding ketchup bottles that tipped off the other tenants of the warehouse. Not present on the scene, the counterfeiters were unfortunately not caught red-handed.

5) The brand's first product was not ketchup.

While ketchup is the product Heinz is most associated with, the company actually has its roots in producing horseradish sauce as its first condiment! It ultimately didn't prove to be a fruitful endeavor, as the company went bankrupt in around half a decade's time. However, in a resonating redemption arc, Heinz got back up and running just a year later selling tomato ketchup, among other items, and the rest is history.

6) Coal tar was originally used to get ketchup's red color.

Prior to the 20th century, the signature red color of ketchup was only brought out through the preservative coal tar. If done without the coal tar, the ketchup would turn out closer to yellow in color. Heinz was in the same boat as other ketchup manufacturers using the preservative, until just after the turn of the century, when the company did away with producing ketchup with preservatives, while still managing to maintain its red color known today.

7) Ketchup has come in orange, blue, purple, and green.

Yes, ketchup is famously red, but there was a time in Heinz history that their ketchup came in orange, blue, purple, and green variants. This is due to their EZ Squirt brand, an offshoot of Heinz that tried to appeal to kids with bright and new colors and a nozzle that'd allow them to lay out the ketchup more precisely.

In 1999, the National Aeronautics and Space Administration (NASA) approved Heinz ketchup as a consumable for astronauts aboard the International Space Station. This is some feat, considering that all food items are rigorously investigated and tested before being approved for outer space travel.