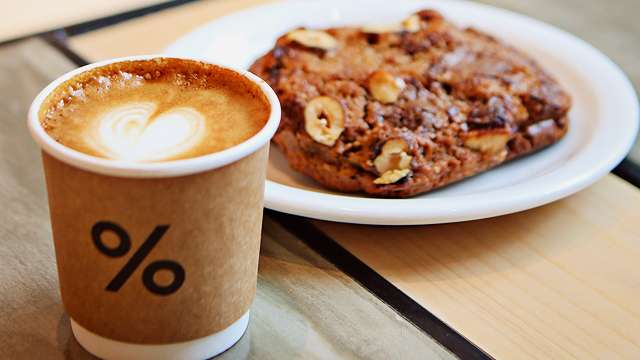 The Restaurants We're Excited to See at The Podium

Say hello to your new hangout.

(SPOT.ph) Just a stone’s throw away from SM Megamall is the newly renovated The Podium, whose new wing was opened to the public late in 2017. Anyone who's frequented the old Podium can attest that the younger half is a lot brighter and better than its predecessor, with high ceilings and a more airy ambience, but admit it—you must miss the old one, too. After all, it's been hiding behind big panels this whole time.

Good news: 2019 proves to be a great one for shopping addicts and foodies because they've just took down the boards, completely revealing the entire mall, post-facelift. And even if you’ve practically explored every nook and cranny of the brand-new The Podium (well, not technically, but it feels like it) due to excitement, your adventures aren’t quite over yet. Keep your eyes peeled for these 10 restaurants opening soon at The Podium.

Back then, you could only eat at Mamou in BGC or Makati, so everyone was excited to see it open at Ayala Malls the 30th in 2017. In 2019, they’re opening yet another branch, this time at The Podium. Now, you’ve got one more spot to enjoy their famous steaks and pastas—just thinking about their Angus Rib-Eye USDA Prime Grade Steak (P1,950/single, P3,490/twin) and classic Lorenzo’s Truffle Cream Pasta (P395) will have your mouth watering in no time. We wonder what name they’ll give this fourth outpost.

Noodle lovers will be happy to hear that Kureji, originally from Ayala Malls Vertis North, is coming to Ortigas soon. The homegrown restaurant became popular for their piping-hot ramen served in sizzling stone bowls. We bet you can’t wait to dig into their Sizzling Shoyu Ramen (P380) or Sizzling Miso Garlic Ramen (P380), both flaunting firm noodles and a subtle charred flavor.

Nanyang, a Singapore-inspired coffee shop-slash-restaurant is finally bringing their signature kopi and kaya toast to The Podium. You don’t need to drive all the way to BGC anymore to enjoy their Hot Kopi (P100), whose slow-roasted beans are brewed with butter and sugar to give the drink an interesting flavor, or their Traditional Kaya Toast (P70), a Singaporean breakfast staple made with bread, butter, and kaya jam. Of course, you can also expect to see their heftier meal options, like their good old-fashioned Hainanese Chicken Rice (P268).

For a taste of traditional Indian cuisine, New Bombay is a no-fail spot in the Metro. Now that they’re coming to The Podium, it’ll be even easier to get your fix of their best-selling dishes. Order the crowd-pleasing Biryani (P285), or basmati rice cooked with either chicken, fish, mutton, egg, or shrimp. They’ve also got an impressive selection of naan and kebab.

You might know Salvatore Cuomo as one of the world’s most famous Italian restaurants, and for a long time, you could only catch them in Uptown Bonifacio. Great news: You can now see (and taste!) for yourself what makes this pizzeria so popular without braving the horrendous traffic to Uptown Parade. Their D.O.C. Pizza (P850) is so special, it has an official certification from the prestigious Denominazione di Origine Controllata, which awards the best margherita or marinara pizzas in the world, so you’re sure it’s as good as it gets. Another bestseller you’d want to try is the Quattro Formaggi (P770), Salvatore Cuomo’s take on the classic four-cheese pizza.

It’s no secret that Choi Garden is one of the best restaurants for Chinese food in the Metro. You don’t need to worry about getting a table at their Greenhills branch anymore, because they’re also opening at The Podium. Now, you can try their best-selling dishes whenever you’re in the area, like the Roast Duck (P500/one-fourth kilo) and Sweet and Sour Pork (P380), as well as their wide assortment of dim sum and noodles.

The Moment Group might have opened Manam Café at SM Megamall late in 2018, but they’re not stopping there yet. They’re bringing their popular all-day breakfast dishes and Filipino-inspired treats to this branch, like the Three Cheese Ensaymada ‘Wich (P200), with a kesong puti surprise center; Ube Sticky Roll (P115), a snack that’ll remind you of a cinnamon roll, but with ube; or the addicting and zesty Calamansi Tart (P220), which is perfect with hot coffee.

Update: This article was originally published with two other restaurants on the list that will not be opening at The Podium after all. We regret the error.