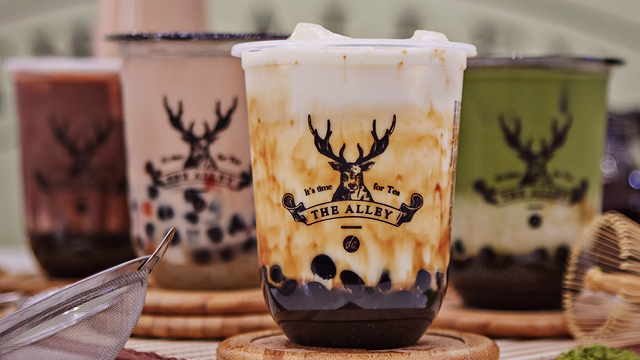 The Alley opens their first branch in the Philippines.

(SPOT.ph) With so many milk-tea shops opening in the Metro, it’s almost easy to confuse one with the other. Perhaps even more so with The Alley, which opened in SM Mall of Asia on May 10, considering a few namesakes have been around the Metro for quite some time now. But make no mistake—one look at their carefully prepared drinks and you’ll know this premium tea shop from Taiwan tells a completely different story.

And it’s a story you’ll know after having tried all their drinks, says founder Mao Ting Chiu, who flew to Manila for The Alley’s soft opening. For him, every drink on the menu represents a story worth knowing, a chapter of the bubble-tea shop’s growing success. It first opened its doors in Taiwan in 2013 and has since made a name for itself globally, with branches across and outside Asia.

Not to be confused with similarly named shops in the Metro, The Alley offers more than just the usual milk tea. The founder, after all, is a designer himself, so the first thing you’ll notice about their drinks is that they’re almost too pretty to drink. But once you’ve taken a sip, you won’t be able to put down the cup.

The Alley’s Brown Sugar Deerioca Series feature four best-selling drinks made with their trademark tapioca pearls. Named after the logo, the Deerioca pearls are made from scratch, and you’ll feel the difference once you bite into the sumptuous sinkers.

You can’t go wrong with the Brown Sugar Deerioca Milk (P120), which is a blend of fresh milk and Deerioca pearls blanketed in thick brown-sugar syrup. The pearls are cooked to perfection—chewy and velvety, with a sweetness that isn’t overpowering. The deep caramel flavor of the Deerioca is balanced by the smooth milk. You can also try the Brown Sugar Deerioca Creme Brulee Milk (P130), made even richer with the addition of silky crème brûlée.

Prefer regular milk tea over brown-sugar milk drinks?Take your pick from the Premium Milk Tea Series. According to Eunice Uy Cua, who’s responsible for bringing The Alley to Manila, the Royal No. 9 Milk Tea (P120) is a must-try—it’s made with a single-blend tea you won’t find in other milk-tea shops in the Philippines. It’s recognized as one of their signature drinks—and for good reason: The tea blend has a subtle fruity and floral flavor profile that goes well with the milk and tapioca pearls.

If you’re a big fan of sinkers, get The Alley Trio Milk Tea (P120)—it has tapioca, coconut jelly, and konjac jelly—but if you’re looking for a no-frills option, The Alley Milk Tea (P100) can easily be your new go-to.

Still on soft opening, The Alley in SM Mall of Asia won’t be offering some drinks just yet, but we know you’ll be excited to try their Aurora Series—and not just because you want them in your Instagram feed. The Northern Lights is a refreshing fruity drink served in a glass bottle. True to its name, it features an ombre of pinks and purples while the Morning Dawn has some yellow thrown into the mix.

Another drink to watch for is the Garden Milk Tea, which has a generous topping of cocoa powder on top. Mix it in if you want—the bitterness will blend nicely to tone down the sweetness—but you can also leave it as is if you prefer.

For now, The Alley will be bringing you its best drinks from their little nook at the SM Mall of Asia, but you better keep your eyes peeled. Soon, you’ll be able to find them in Greenhills, SM North EDSA, The Podium, and SM Sta. Mesa.

One can easily tell how much thought had gone into perfecting each drink offered at The Alley. Carefully prepared, from the way they look to the way they taste, it’s hard not to feel like each drink really comes with a story of their own—and with how well each drink is executed, you’ll hardly mind getting to know all of them.