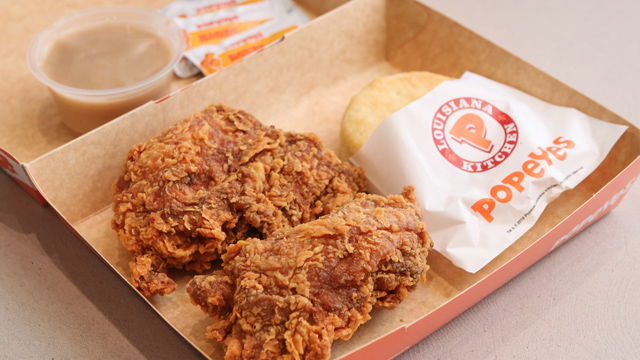 SNEAK PEEK: Popeyes Is Back in Manila

(SPOT.ph)  If you're thinking, "Wait a minute, I feel like I've had Popeyes in Manila before," you're not wrong. A lot of us have memories of Popeyes: The punchy flavors of their Southern fried chicken and the buttermilk biscuits that almost throw any thought of rice out the window. Many were disappointed when Popeyes closed the last of their branches in Manila in 2007, but now they're back and ready to conquer the Metro once again with the opening of their first branch at Arcovia City in Pasig City on May 16.

Popeyes first opened in the Philippines in the early 2000s, but sadly had to close their branches completely in 2007. But, thanks to a partnership between the Kuya J Group and the Canadian company Restaurant Brands Inc., they're now back and set to open branches all over Metro Manila. In fact, there are 10 branches already in the works, with more planned.

Also read: Do You Think You Can Handle Popeyes' New Spicy Chicken?

Here's what to expect from Popeyes best sellers at their new Metro Manila branches:

Popeyes is, surprisingly, not named after the Popeye the Sailorman. Instead, the inspiration comes from Gene Hackman’s character, Detective Jimmy "Popeye" Doyle, in the action-thriller film The French Connection. The first Popeyes opened in Arabi, Louisiana, in 1972, with owner Alvin C. Copeland Sr. selling his signature spicy New Orleans-style fried chicken. Since then, the fried-chicken restaurant has expanded all over the United States, and to other parts of the world, with a whopping 3,102 restaurants worldwide.

Even with thousands of branches all over the world, Popeyes keeps their signature red-and-orange color scheme pretty much everywhere, including the Philippines. The branch at Arcovia City is extremely spacious, with the vibe of an old-school American diner, made more current by hip typography and neon signs on the wall.

Another classic Popeyes menu item on the menu is the Chicken Tenders (P120 to P145), which come with your choice of dip: Ranch, Bold BBQ, Mardi Gras, and Gravy.

New and unique to the Philippines are the new biscuit flavors. Aside from the classic Honey (P45), you can also get White Chocolate (P55) and Hazelnut (P55) biscuits.

With lots of new menu items in store at Popeyes, both those nostalgic for their signature chicken and biscuits and those new to this chain will have lots of reasons to keep coming back.