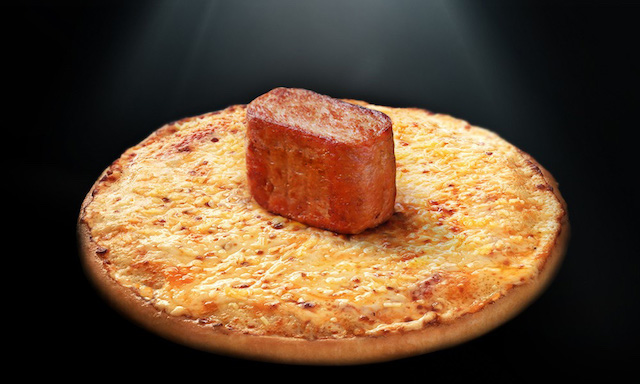 We have a few guesses...and suggestions.

It's not that we're not into the idea—the complete opposite, in fact—but you can't blame us for having trust issues. Plus, there's not much to go on, given the photo Pizza Hut released just this morning:

It's straightforward enough. Maybe too straightforward. So we can't help but try to guess—what form will SPAM take on the Pizza Hut staple? Here are a few ideas we had:

See, here's one we can all get behind. It's not that far-fetched an idea. From cheese to sausage to SPAM—the leap isn't far. After all, it took a lot of work to get the Stuffed Crust to the crave-inducing status it's at today.

Here's another idea we're not opposed to. Hey, SPAM can be pretty good. We just hope they're cubed up and not laid across the pizza in massive slices—there's only so much we can take.

A new take on Hawaiian Pizza

We admit this is a bit of a stretch, but SPAM really is a favorite in Hawaii. It wouldn't be too weird to have it with pineapple—although we know that, for many of you, that's still debatable.

SPAM fries on the side

If we're being honest, this one's more of a suggestion than a guess. Insert shrug gif here.

But in all seriousness, we can see this shaping up to be something amazing. SPAM has a rich history to its name—keeping soldiers fed in the trenches and filling Americans' shopping carts in the 2008 recession. What started out as an inexpensive way to put meat on the table has become a rainy-day household staple, and to find it on one of our favorite items just seems like the natural next step.

Pizza Hut Spam Pizza Teaser Savvy Adventurer Humor
Your Guide to Thriving in This Strange New World
Staying
In? What to watch, what to eat, and where to shop from home
OR
Heading
Out? What you need to know to stay safe when heading out