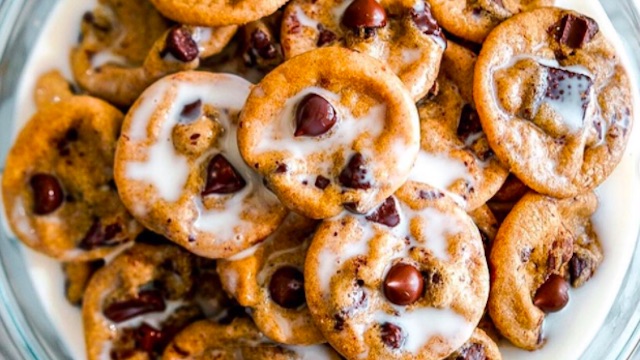 (SPOT.ph) It’s been great knowing ya, pancake cereal, but there’s a hot new recipe in town. It’s called cookie cereal—basically itty-bitty chocolate chip cookies that you can eat out of a bowl with milk, as you would with cereal. In case that sounds familiar, yes, it’s basically similar to the cereal known as Cookie Crisp—except this is made with actual cookies and not just a cookie-shaped and flavored cereal base.

Although similar recipes have existed way back (as early as 2013), much of its current popularity can be attributed to food blogger Justin Schuble, who goes by @dcfoodporn on Instagram and @justinmschuble on TikTok. Inspired by the popularity of pancake cereal, Schuble experimented with making cookie cereal and posted a short clip on Instagram on May 7, which has since garnered more than 360,000 views and 28,000 likes. The version posted on TikTok has garnered more than 486,000 views and 58,100 likes.

In the video, Schuble makes the now-viral recipe using ready-made cookie dough. He is shown chopping up the cookie dough into small pieces, then rolling them into balls, putting them on a baking sheet, and baking them at a time and temperature not specified. He lists more tips on how to make it in a follow-up photo post on May 9: first, he notes that the cookie dough should be cut into even pieces, which will help them bake more evenly. Instead of rolling it into balls, Schuble suggests "just [rounding] the edges". He also suggests adding an extra chocolate chip on top for a "prettier final product." He then bakes the cookies at 177°C for seven minutes, noting that the cookies “will still be a little soft” but that they’ll harden after a few minutes on the counter.

Ready to try it? You can make it using store-bought or homemade cookie dough. Don’t just be limited to doing chocolate chip, either—just about any drop cookie dough or recipe, such as double chocolate chip or peanut butter, should also work. Whether you take it for breakfast or dessert, they’re a great new way to enjoy the cookie-milk combo.

Cookie Cereal Tiktok Instagram Trending Recipe Baking Adventurer Savvy Seasoned New Normal Foodie
Your Guide to Thriving in This Strange New World
Staying
In? What to watch, what to eat, and where to shop from home
OR
Heading
Out? What you need to know to stay safe when heading out