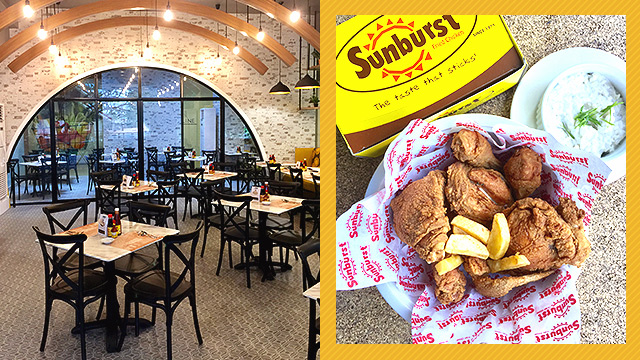 (SPOT.ph) It caught me by surprise to hear that Cebu loves its chicken. As a Cebuano, I’ve never had to think about it. But taking stock of the number of homegrown restaurants that specialize in the bird, I had to concede. From charcoal-grilled native chicken to pre-Korean fried-chicken craze, Cebu has embraced them all with open arms—none more so than Sunburst Fried Chicken. After all, how many times have you heard your Cebuano friends proudly introduce you to this fried-chicken chain? We even listed it as an essential restaurant. Turns out, Sunburst wasn’t born in Cebu. We only think it is.

As soon as you enter most Sunburst branches, the savory aroma hits you, with the intensity varying in other locations outside of Cebu. It’s the smell of fried-chicken grease; the oil hangs in the air like an olfactory signature. Think of your favorite coffee shop or the local fast-food joints calling you with their distinguishable scents from a block away. You can start your meal with their crispy fried chicken skin, Chick’n Crackers (small, P188; regular, P288), which is a great appetizer that gives you a taste of what's to come without filling you up.

Even those with learned palates are eluded by Sunburst’s flavor profile. Perhaps it’s the all-too-familiar problem of familiarity blurring the senses and clouding it with sentimentality. Or it could also be a testament to how well its spices and herbs are blended. The Dipolog-born, Cebu-based Culinary Institute of America alumnus Grant Young even went so far as to say that the chicken’s natural flavors shine through because of how delicately it’s seasoned.

Other than the black pepper specks in the breading, it quite literally is a mystery what goes into that chicken. When I asked other locals to describe the flavor of Sunburst fried chicken, some of the words that came up were "juicy", "homey", "comforting", and of course, "crispy".

The rice meals, Sunny Solo (P138/thigh; P148/ribkeel), Sunduo (P198/a choice of a big part and a small part), and Classic (P288/three pieces), come with coleslaw and potato wedges. But if you’re extra picky about which part you want, you can have all drumsticks (P168/two pieces, P248/four pieces), wings (P178/two pieces; P238/four pieces), thighs (P238/two pieces), or ribkeels (P248/two pieces). To truly eat like a local, dip your chicken in a mix of Worcestershire sauce and ketchup. If you’re feeling adventurous, maybe some hot sauce, too.

Although best known for their fried chicken, every family has other favorites to order at Sunburst. The appetizers Liver ‘n Gizzard (P128/small; P288/regular)—also seasoned and fried in the same way as the chicken meat—and Kinilaw (P298) are often enjoyed as mains. Other popular dishes are Sotanghon Guisado (P178), Crispy Pata (P618), and Beef Ampalaya (P198). You can even get more of the sweet and tangy Coleslaw (P108/small; P158/regular) as it’s a nice break in between the fried bites.

From the very start, Sunburst was already serving fried chicken in—dramatic pause—Iligan City, Lanao del Norte. In 1971, the late Fernando J. Congmon and his wife Victoria Q. Congmon registered the business with the Securities and Exchange Commission, and with only four tables, they opened their home to the public. While there are claims that it is the first restaurant in Iligan, little is known about this period outside of anecdotes from Iliganons and the fondness with which they recall that house. But it’s safe to assume that its reputation grew from word of mouth, so much so that it already sold its first franchise in the following decade.

In the 1980s, Sunburst Fried Chicken-Franchising & Management Corp. (SFC-FMC) was born, and a branch in Davao City was opened. From here, the timeline gets a little hazy. As to when the first branch in Cebu was opened, no one could give a straight answer. One thing is for sure, Sunburst found its footing here in Cebu. Paulette Villabona, restaurant manager at the Iligan branch, agrees; after all, Cebu has the most number of branches out of any province; Davao and Cagayan de Oro are tied at second with two each. The company’s headquarters is also here in Mandaue City, Cebu.

When asked what made Sunburst click in Cebu, franchisee Arlene said, “Because it's “the taste that sticks,’” quoting the restaurant’s slogan. “It’s affordable and brings nostalgia to Cebuanos who grew up with the brand.”

Until now, Cebuanos remember the branch in downtown Cebu, near the Basilica Minore del Santo Niño de Cebu. Along with the branch in Iligan, it was one of the last non-franchise restaurants. Some said it tasted better as the franchises and company-owned branches coexisted back then, but personally it's hard to tell the difference.

Today, the company is still fully owned by the Congmon family. And despite the setbacks of COVID-19, the fried-chicken chain is celebrating their golden anniversary. Franchise Manager Wentessa Banibane-Alenton even hints at the possibility of loyalty cards, but nothing has been officially decided yet.

Cebu Fried Chicken Adventurer Savvy Seasoned Tpc-000001 Staying In Regional Sunburst Topspot Cebu
Your Guide to Thriving in This Strange New World
Staying
In? What to watch, what to eat, and where to shop from home
OR
Heading
Out? What you need to know to stay safe when heading out