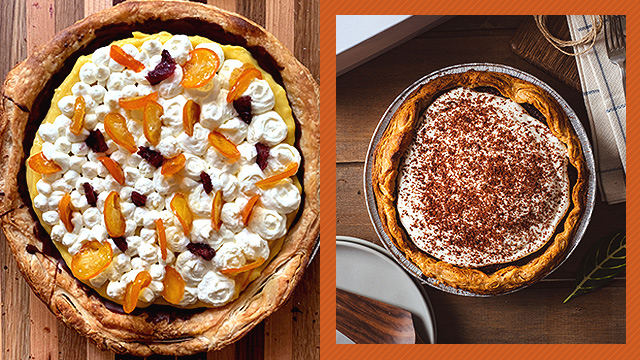 This Local Pie Maker Wants to Spread the "Pie Obsession"

(SPOT.ph) Filipinos are no doubt dessert lovers. We turn to sugary treats even on regular days, and of course, no celebration is complete without a sweet meal-ender. But when you think of desserts in these parts, what comes to mind are mostly along the lines of cakes, cookies, and ice cream. There isn’t as big of a clamour for pie. Sure, there’s the popular pasalubong buko pie, but the medium isn’t utilized as much as it is in the States, for example—which is peculiar, given the wide variety of great fruit we’ve got locally.

This is slowly changing, though. One local pie maker in particular has been making waves on local social media for her seriously swoon-worthy pies: Meet Raeanne Young-Sagan, a mom of three and pie enthusiast who just launched her business, Hey Pie People.

The Organic Rise to Fame of Young-Sagan’s Pies

Browse through the feeds and stories of some of Manila’s foodie folks—including former executive editor of Town & Country Philippines Alicia Colby-Sy and food stylist and content creator Chichi Tullao, to name a few—and you’ll see Young-Sagan’s pies. This was even before she even started taking orders from the public.

“It’s blowing up kind of in a weird way,” Young-Sagan admits in an interview with SPOT.ph. Back then, she was only making pies for herself as she was "obsessed" with sating her own cravings. “I was making pie every day and my own supply outgrew our household demand,” she says. “Then I was giving pies away to anyone who would eat them, and they started telling their friends.” She soon gained fame from these referrals and through word-of-mouth. “Like, family people [or] one friend would eat it, and then they’ll be like, ‘Oh my god, my friend wants to order, can you make them one?’”

She then started taking very limited orders for friends and acquaintances; and with the great feedback and demand, she eventually decided to turn it into a business where she could take limited orders on a weekly basis.

With that, Young-Sagan finally launched Hey Pie People. “I started [the business] ‘cause I couldn’t turn down that demand anymore,” says Sagan. “And it’s my genuine dream for everyone to be as obsessed with pie as I am.”

How the Pie Obsession Started

Even before starting the business, Young-Sagan’s passion for pie has been very much evident from her Instagram posts, especially from the past couple of months. You’ll see photos of her many pie adventures, where she plays around with different ingredients, lattice designs, and more to make pies of all kinds—ranging from classic to totally experimental. Think roasted strawberry pie with berries from Benguet, a maja blanca-inspired pie, buttermilk pie with fresh pomelo and calamansi zest, and peanut butter banana cream pie, just to name a few.

Surprisingly, though, Young-Sagan—whose day job involves web development and engineering along with her husband for clients in the States—doesn’t consider herself a baker. “I dont bake a lot of things—like, I dont make cookies. Actually, I make terrible cookies,” Young-Sagan laments with a laugh.

She and her husband hail from Oakland, California, but Young-Sagan admits it wasn’t until she left the States to live in Brazil that she got into pie. While her family did celebrate Thanksgiving with pie, she wasn’t exactly raised eating pie the way most Americans do. “I didn’t really have your traditional homemade American apple pie made by my mom, or whatever,” she says. “Growing up in the States, we were immigrants.”

“But somehow when I left [and] found myself in Brazil, I needed pie in my life,” Young-Sagan continues, explaining that in Brazil, pie isn’t quite a thing, and its closest counterparts lean toward the savory side. “It was Thanksgiving, I was in Brazil, [and] I super needed pie on Thanksgiving,” she shares. “So I was determined to make [pie]. I was just really homesick.”

“I was also super pregnant with the twins [at the time],” Young-Sagan shares. “So I was like pregnant and hormonal and just like craving things, and it was just like, ‘I need to eat all the pies!’” She ended up making even more pies that Christmas. “It was like a craving,” she shares. Young-Sagan and her husband eventually moved to the Philippines to raise her family and get closer with her dad. As she got pregnant for the second time, she once again found herself making pie “all the time.” “It must’ve been a hormonal thing!”

As she went about her pie-making adventures, Young-Sagan would frequently message esteemed recipe developer and award-winning food stylist Erin Jeanne McDowell, who authored the famous The Book on Pie—a cookbook that covers “everything you need to know to bake perfect pies”. “She is the pie queen,” says Young-Sagan. “We just met this year, and I started out just by blowing up her DMs with all my questions. And then we just started calling each other and we become like pen pals.” Young-Sagan and McDowell would even go on to hold an Instagram Live session together. “She’s amazing, and she’s just so generous for answering all my questions, too.”

Young-Sagan’s Pie Philosophy, and The Struggles of Making Pie in a Tropical Country

Young-Sagan’s current go-to pie crust is a combination of the pie crust recipes (and techniques) of McDowell (who talks the hydration level being variable) and pastry chef and food writer Stella Parks (who uses a fixed amount of water and emphasizes regulating the temperature of the dough). “I kind of went back and forth between [their] methods, and I think I came up with kind of my own method,” says Young-Sagan. “But I’m... a little bit in between, like using both your gut feeling but also like precise measurements.” The result is a truly flaky, buttery-tasting pie crust that’s notably sturdy (but not tough!). It passes what McDowell dubbs the "sturdy pie challenge": You can hold a whole pie outside the dish, as well as hold and eat a slice like you would like a pizza. "A sturdy pie is an indication that the pie was perfectly baked," explains Young-Sagan. "This is very difficult for most pie makers to achieve because it’s hard to make crust that’s both this sturdy and flaky, and a filling that doesn’t leak through."

The trick to making great pies, Young-Sagan explains, is all about hitting the balance "between muscle memory and precise measurements." "Which I guess [applies to] all cooking, right?" she says. "And like, using your gut. So do it a bunch, use precise measurements and then also trust your instincts."

Now, there are definitely challenges. Ask any Filipino baker and they’ll share that whipping up pies can be a real struggle in the Philippine climate—after all, achieving the desired flakiness in the pie crust has to do with keeping the fat (e.g. butter) cold, and butter can easily melt in this heat. Young-Sagan relates to this sentiment. “When I was making pie in Brazil, it was summer… I think it has to be a testament to how motivated and insane I was to need pie that badly to be making it in that climate,” she relays. “It [was] so hard, so [for] anybody who’s making pie here, I totally want to give them encouragement that it’s possible, but also like, pat yourself on the back ‘cause it’s really really hard to do.”

“[Because of] the butter, you have to work really fast,” Young-Sagan explains. “I do [turn on the air conditioning] the room that I make my crust in, but I actually didn’t start doing that until recently, so before that there was no [air conditioning] and I was just like, running to the fridge!” A tip she gives is to use “really good butter”. “I’ve found that butter with a higher fat content… won’t melt or squish as fast on you. So it stays harder longer,” she says. “Yeah, and running. Exercise... Work fast when it’s hot.”

The filling is equally important, of course—and Young-Sagan takes inspiration from whatever fruit or other ingredients she’s got a lot of. “Historically, [pie was] the thing that you crammed all of the fruits from your harvest into. It was just like a container [or] vehicle for you have, like [if you had] a couple apple trees that dropped all these apples in a week and you need something to do with all of them so you like threw them all in a pie. That’s actually one of the reasons why pie recipes require like a kilo of fruit,” she explains. “I get a lot of my inspiration from thinking about like, ‘what do I have an abundance of that I can cram into this crust?’” Young-Sagan also emphasizes the importance of having enough filling in the pie. “If it’s like, kulang filling... there’s nothing sadder than that. It’s like a disgrace to the art form of making pie.”

Worth noting, too, is how Young-Sagan is out to expand people’s pie perceptions. “Every time I look at an ingredient, I always think like, ‘Can I make a pie out of that?’” she shares. “Everyone thinks that there’s kinds of things that can be pie, [like for example], people think you can only have apple pie or buko pie or peach pie or coconut cream pie.” But Young-Sagan aims to go beyond that. “These cultural limitations of what you think can be a pie… I just want to break all of those down.” She’s experimented with using local fruit such as Indian mangoes, star apples, and papaya—and though not always successful (the papaya, for example, she explains might have an enzyme that “prevents it from thickening properly”), it still lets her explore her creativity and prove just how versatile the pastry can be.

How to Order From Hey Pie People

At the moment, Hey Pie People sells a different pie every week, which they announce on their Instagram page at 10 a.m. every Saturday. They accept orders through an order form they’ll be posting from that day and time onwards—do know that it sells out fast! (We’re talking in two minutes during their first run on May 1.) If you’re lucky enough to secure a slot, you can then pick up your pie (or book a courier—Hey Pie People recommends a car—for delivery) on your desired date that week, from their outpost in Alabang.

Raeanne Sagan Raeanne Young-sagan Hey Pie People Pie Online Seller Food Delivery Savvy Seasoned Tpc-000001 Cvd Services Directory New Normal Foodie Greener
Your Guide to Thriving in This Strange New World
Staying
In? What to watch, what to eat, and where to shop from home
OR
Heading
Out? What you need to know to stay safe when heading out