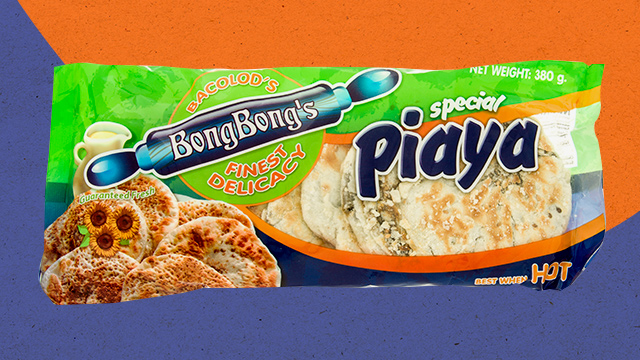 How Bacolod's Famous Piaya Store Grew From P80 in Capital

And a borrowed fry pan.

(SPOT.ph) Bacolod City in the Visayas is well known for its sweets and pastries. It is on Negros Island, after all, which is home to vast sugar cane plantations, making it one of the Philippines' top producers of sugar. Travelers would visit Calea for their cakes, Pendy's for napoleones, and El Ideal for their cookies. The last stop is any BongBong's store or stall, which you can find almost anywhere in the city, including the airport. The homegrown brand sells piaya, barquillos, and other snacks since 1984; and anyone who has traveled to Negros Island—or other parts of the Visayas—always comes home with a Bongbong's item.

But Bongbong's hasn't always been the big Negros delicacy brand that we know today. Back in 1984, newly married couple Reynaldo B. Villan and Ma. Lomer Cañedo started cooking piaya at home with a borrowed fry pan known as "kalaha" and savings amounting to P80. The money came from Villan's 1,600-peso separation pay, which he received after resigning from his post as a helper at Polets Bakery in downtown Bacolod two years prior. The couple would flatten the piaya with a used 7-Up bottle and sell each piece at 60 centavos. A year later, they started selling their product at the Bacolod Airport in Singcang; and Cañedo's father, a fish vendor, helped out by selling piaya in subdvisions.

The business continously expanded from then on. They started hiring helpers, upgraded from a bicycle to a second-hand jeepney to service delivery of orders, and made more items like barquillos, meringue, cookies, and hopia. Their first official store opened in 1989.

By 1993, they transferred their production from Singcang to BongBong's Backyard Factory in Greenplains Alijis, where they were able to produce more sweets like biscocho, toasted muffins, butterscotch, cheese tarts, caramel tarts, and otap. They continued acquiring bigger factories for mass production and more delivery trucks as the brand's sales go up in more places even outside Bacolod City. By the late 2010s, they already have more than 60 stores, including Bongbong's Boracay.

Some of Bongbong's awards include the National Shopper's Choice Awards in 2005 and 2006; and Regional Winner for Healthy Workplace, which was awarded by the Department of Health and Bureau of Food and Drugs in 2007, 2008, and 2009. Bongbongs Villan Corporation is also a consistent Pasalubong Center of the Year awardee, even reaching Hall of Fame status by 2013.

On July 15, 2021, the Food and Drug Administration issued a public health warning "against the purchase and consumption of unregistered food products," which includes Bongbong's Special Piaya and Bongbong's Polvoron. According to the agency's memo, they "verified through online monitoring or post-marketing surveillance that the [mentioned] food products are not registered and no corresponding Certificates of Product Registration have been issued." They also said that they "cannot assure its quality and safety" since they "have not gone throuh the evaluation process of the Food and Drug Administration."

Bacolod Regional Piaya Food And Drug Administration Adventurer Savvy Seasoned Pasalubong Hard News Followup
Your Guide to Thriving in This Strange New World
Staying
In? What to watch, what to eat, and where to shop from home
OR
Heading
Out? What you need to know to stay safe when heading out