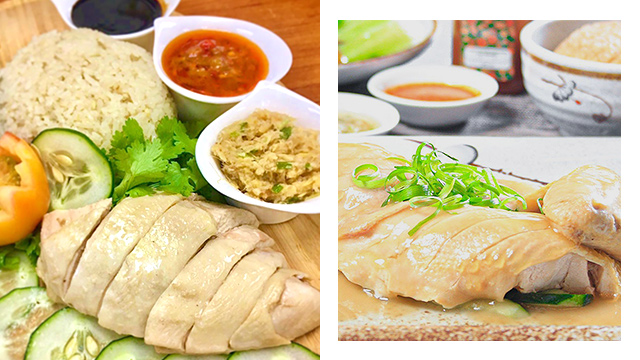 The Best Places for Great Hainanese Chicken Rice in Manila

Travel to Singapore via your taste buds.

(SPOT.ph) The idea of poached or steamed dishes doesn’t often excite as much as their fried or grilled counterparts—that is, unless we’re talking about Hainanese chicken rice. The dish essentially revolves around chicken that’s poached or steamed, with a lengthy process that involves steeping chicken in boiling water then soaking it in cold water to keep it from overcooking. When done well, you get not just tender, succulent meat but also gelatinous layer on the chicken skin that gives you a silky sensation in the mouth. It’s generally tinged with ginger, scallions, and/or other aromatics, but for the most part still lets the chicken’s natural flavor shine. The chicken is often served with cucumbers for freshness; sauces (commonly a sweet and dark soy sauce, chili sauce, and ginger sauce) that contribute sweetness and umami, heat, and zestiness, respectively. The rice that accompanies it gets its flavor from being cooked in the poaching liquid; and at times, you also get a small bowl of the chicken stock that you can sip on in between bites.

Though Hainanese chicken rice has Chinese roots, it’s best associated with Singapore and is even hailed as its unofficial national dish; no trip to the Lion City is complete without downing a plate or two of this specialty. But Manila is home to a number of great versions as well, and we’ve rounded them up in this list.

Also read:
Top 10 Hainanese Chicken Rice in Manila
The Best Laksa and Laksa Kits You Can Order in Manila

Get your Hainanese chicken rice fix from these restaurants and online sellers:

This Makati-based online seller’s Hainanese Chicken reigned supreme in our Top 10 Hainanese Chicken Rice in Manila list way back in 2011, and while many competitors have since come and gone, theirs remains some of the very best. These come in trays (P1,400) that let out the distinct aroma of chicken as you take out the cover. The chicken is seasoned just enough and truly succulent, and you’ll find its natural juices pooled at the bottom of the tray—go ahead and spoon some over your meat!

An order comes with the prerequisite sauces (topping sauce, chili sauce, ginger sauce, and sweet soy sauce), plus rice that’s so full of chicken flavor, you could pretty much eat it on its own. You can also go the more off-beat (but must-try) route by getting a tray with olive rice (P1,500). Just reach out to one of their contact numbers for orders.

We’re huge fans of their steaks, but beef is just half of the flagship-dish equation at Hai Chix and Steaks; the other half, of course, being their no-fuss yet juicy Hainanese Chicken (P295). Their take on the dish comes with fragrant chicken rice and soy, chili, and ginger sauces. Aside from the traditional version—which is known for its moist and flavorful meat—they also make the Fried Hainanese Chicken (P295) in case you’re up for a crunchier experience. You can give their Ortigas or Greenhills stores a call to get your fix.

Singaporean and Cantonese restaurant Tao Yuan’s Boneless Hainanese Chicken (P895/half, P1,710/whole with Hainanese rice) could very well be some of the best in the country. It’s got chicken that’s consistently succulent—even the breast part—and seasoned just enough to highlight its natural flavor—you’ll love it even sans sauces, but the sauces (ginger, chili, and soy) do wonderfully complement the meat. You can reach out to one of their numbers to order, and they’ll assist you in booking a courier.

For orders, find Hawker Hainanese Chicken Rice on GrabFood or contact 0956-260-0090. You can also visit their Facebook page.

Nanyang’s Hainanese Chicken Rice (P268) is a party of different tastes and textures as you alternate between the warm soup, silky and flavorful chicken (that you can spice up with their ginger, sweet soy, and/or chili sauces), chicken-flavored rice, and earthy sautéed bok choy. You can find Nanyang on GrabFood, Foodpanda, and Pickaroo; alternatively, go ahead and place your orders through their website.

For orders, find Nanyang on GrabFood, Foodpanda, or Pickaroo, or visit their website. You can also check out Nanyang’s Facebook page.

From Singapore comes Michelin Bib Gourmand-awarded Tiong Bahru, which is known for their boneless take on Hainanese chicken rice. You can’t go wrong with their combo of soft, succulent chicken; soy, chili, and ginger sauces; and rice that's cooked in the chicken’s juices. You can get a solo meal for P255, a half chicken for P440, or a whole chicken for P750; you have the option to get your chicken roasted instead of the traditional steamed, too. Simply look for them on GrabFood or Foodpanda.

For orders, find Tiong Bahru Hainanese Boneless Chicken Rice on GrabFood or Foodpanda. You can also check out their Facebook page.

Wangfu is best known for their Chinese eats, but they’ve got a slew of Singaporean dishes too—among which is the Hainanese Chicken (starts at P298/quarter). You’ll come for the thin, gleaming skin accentuated with a light-brown sauce of the chicken’s juices; and stay for the soft meat that’s amply savory by itself but even better with the trio of soy, chili, and ginger sauces. You can send Wangfu a message on Facebook, find them GrabFood, or give the branch nearest you a call to get your fix.

For orders, send a message to Wangfu Chinese Cafe on Facebook or find them on GrabFood. You can also see a list of branches and their contact numbers.

Hainanese Kitchen’s Hainanese Chicken (tongue twister alert!) ticks all the right boxes—think Hainanese chicken that’s tender and flavorful, chicken rice with a savory profile that goes with just about anything, and sauces (soy-singer, sambal-sriracha-chili, and garlic-ginger, to be exact) to take every spoonful up a notch. They sell these in trays (P580/half, P995/full), making it a great option to bring to your next (socially distanced) gathering. You can fill up their order form to try it yourself.

For orders, fill out Hainanese Kitchen’s order form. You can also check out their Facebook page.

Wee Nam Kee hails from Singapore and has been around since the 1980s—and with their well-seasoned and juicy Hainanese chicken, it’s not hard to see why. You can go for the regular Hainanese Chicken (starts at P309/quarter), for which you have the option of having your chicken steamed or roasted—or get a combo of both. For an even more memorable meal, go for the Steamed Hainanese Yellow Chicken (starts at P455/small) made with premium yellow chicken, which is hailed the “Wagyu, Kobe, and Kurobuta of poultry” for its extra-tender and rich-tasting character.

If you’re throwing a small party, you’ll be happy to know that Wee Nam Kee now sells their Hainanese chicken in platters (P749/half, P1,199/whole)—and you have the choice between the steamed, roasted, or combo options. You can find Wee Nam Kee on delivery apps, but you can also order via their parent company Relish Group’s delivery website.