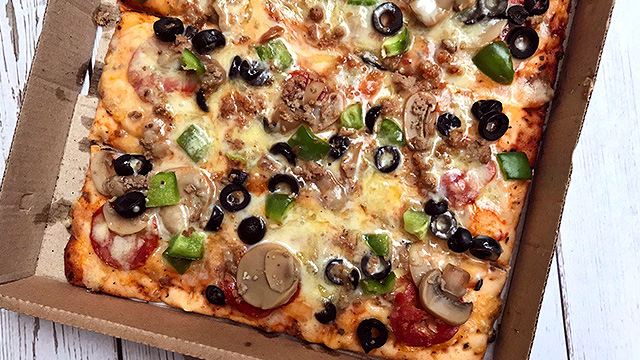 Nostalgic Eats: Is Magoo's Pizza as Good as You Remember It?

Fun fact: Did you know that Magoo's isn't actually homegrown?

(SPOT.ph) Pizza is one of those dishes that’s pretty much stood the test of time, as far as local appeal goes. Manila alone is home to numerous pizza parlors selling pies of varying styles and with all kinds of toppings. For the love of the dough, we looked back at one of the OGs in the local scene: Magoo’s Pizza, which was an institution in the Philippines in the '90s and a staple for bowling fans. They made an impact with their unmistakable square pizzas and even brought the idea of food delivery to our shores. How did they get here, and how does their pizza fare now?

Here’s the origin story of Magoo’s Pizza and our thoughts on their pizza today:

Magoo’s Pizza has become so embedded in contemporary Filipino food culture that you’d think it’s a completely homegrown spot. But Magoo’s Pizza actually hails from Honolulu, Hawaii, where it’s known as the Original Magoo’s Pizza and was founded by Gilbert Sakaguchi in 1967.

Pioneering Food Delivery in the Philippines

The pizza shop won the Filipino audience over not only with their signature pies (fun fact: when they first arrived, only the large size was square!), but also with the concept of food delivery—which was a novel concept back then. “We were the first sa delivery, first din nagka-website,” Martinez shares. At the time, they did their deliveries in a Volkswagen Beetle, similar to how the original did in Honolulu. “Wala pang motorcycle no’n... noong nag-start sila sa Magallanes, umiikot lang ‘yon sa Ayala, nagde-deliver [sila] ng pizza.” They even called their signature vehicle “The Bug”!

These became the talk of the town, but—due to energy concerns—they found it inefficient to drive around a car just to deliver a couple of pizzas. Magoo's Pizza Philippines sought to find an alternative, and began with a three-wheel modified motorcycle cab. Though an improvement from before, it was still inefficient; so by the '80s, they thought of using regular two-wheel motorbikes with a wooden carrier attached behind the seat. (It's similar to the delivery motorcycles you find today, but was revolutionary at the time!)

The wooden carrier sadly didn't hold up well to our local rainy weather, so they experimented with other options—from stainless steel to aluminum—before settling for fiberglass, as it held up to the weather and could be painted easily.

The Significance of Magoo's Pizza on Our Shores

Magoo's was well-known to Metro Manila folks around the '80s and '90s (and the early '00s, to an extent), becoming a go-to for get-togethers. "Eventually, we became an independent chain [from the original franchise] in the '90s," Martinez says. They also switched to making only square pizzas then, as they learned via customer feedback that this shape was preferred—the square slices were "more manageable" and easier to cut and divide, after all.

Somehow, though, that fame simmered down as the years went by. Says Pepper.ph, the entry of other pizza players from abroad may have played a role in this, as Magoo’s became overshadowed by the competition. These other pizza brands also employed marketing tactics like easy-to-remember delivery hotlines and commercials starring famous local celebrities.

Martinez admits that there was indeed a time that a good number of their stores closed, as they concentrated their operations around bowling alleys. “Pumasok na lang ['yong stores] sa loob ng bowling centers,” she relays. “If you’re familiar with the Puyat Bowling Centers, ayon kasi captured market namin 'yong mga nando’n, 'yong mga bowlers… [So] nag-sara 'yong mga stores na nasa labas.” Though this carried them through many years, it also made things especially difficult during the pandemic, as bowling centers were not allowed to operate in light of quarantine. “So kami 'di rin maka-operate.”

But not all is lost: By November 2020, the chain revived its then-inactive Facebook page and announced the reopening of two local branches—the AMF-Puyat Bowling and Billiard Center at Q Plaza in Cainta, and the AMF-Puyat Astrobowl at Starmall in Alabang. Soon, they revived their other branches in Eastwood, Makati, and Baguio as well. Like many other food chains, they also hopped on the GrabFood and Foodpanda train, and can now conveniently be ordered for delivery through the apps.

Also read: The Most Popular Pizza Toppings, From "Hard Pass" to "Chef's Kiss"

Magoo’s faces even fiercer competition today, as you can find a whole lot more pizza places here in the Metro—from big chains to Italian establishments to artisanal, home-based shops. Couple that with the rise of the Internet, which has sped up the way information travels across different parts of the globe; and the fact that many of us travel abroad on the reg (pre-pandemic, anyway). It’s safe to say our pizza palates have evolved, so that most Filipinos are now more aware about different pizza styles, and more discerning about what makes so-called “good” pizza good. How does it fare with our modern-day taste buds?

With this question in mind, we went for Magoo’s bestseller: The aptly named Famous Combination (P284/Regular, P419/Family, P604/Party), which combines pepperoni, pork sausage, mushrooms, green peppers, and black olives on their signature square crust. We placed our orders via GrabFood, where there’s a rather significant markup (prices start at P385 on the app). It arrived hot and fresh in its box, which ingeniously features instructions to tear the top of the box to use as handy “paper plates” for serving.

It's pretty much the way we remember it—which also means that in the context of the local pizza scene today, you shouldn't expect the fancy stuff. The crust is on the firm side with a lightly crisp bottom and doughy top, but it lacks chewiness. It tastes a tad sweet and doughy, but doesn’t deliver the flavor complexity of crusts made from scratch. Its cheese is essentially of the processed sort, delivering a more loose melt than the chewy gooeyness of, say, mozzarella. The rest of the toppings more or less follow suit—pepperoni that’s one-note in flavor, mushrooms that come from a can, that sort of thing.

But nobody orders from Magoo’s expecting fancy pizza; at least not in this day and age. Yet there’s a certain appeal in its straightforwardness. Taking a bite immediately brought back memories of our younger days—when life was simpler and your problems revolved around doing your homework rather than work, bills, and whether or not you’d make it alive through this global freaking pandemic.

The crust, though simple, does the job of cushioning against the stronger flavors of the toppings; and the cheese, though of the economical sort, delivers the right creamy, savory bite that’s great with the slightly tangy tomato sauce underneath. The other toppings contribute their own distinct tastes and textures to the mix: The bell peppers give you a crisp, earthy note that balances out the richness of the meats and cheese, while the olives add occasional pops of brininess. The ratio of crust to toppings is spot on; add to that Magoo’s hot sauce—which starts sweet, but gradually delivers satisfying heat—and you’ve got a zesty and harmonious ensemble somewhat reminiscent of a Pinoy-style taco. It’s hard not to go back for another slice.

Magoo's Pizza today more or less matches Magoo's Pizza as we remember it, and it successfully had us reminiscing about our younger days. It's got an old-fashioned sort of charm to it, and a good balance of thin crust to toppings that each contribute their own tastes and textures to the mix.

Now that we’ve all grown up and consumed more pizzas in our lifetimes, it’s tempting to dismiss Magoo’s as being…well, ordinary. But it’s hard to deny the nostalgia evoked by its no-frills flavor—because sometimes you just need a bite of comfort to remind you of better times. Sometimes, you don’t want complicated; you want reliable, nostalgic flavors that soothe the soul. And there’s absolutely no shame in that.

Ultimately, Magoo’s Pizza shouldn’t be pitted against higher-end versions. It’s got a style all of its own—and if you ask us, it’s still delish in its own right.

Magoo's Pizza Retro Resto Pizza Food Delivery Adventurer Savvy Seasoned Tpc-000001 Cvd Services Directory New Normal Foodie Staying In Nostalgia
Your Guide to Thriving in This Strange New World
Staying
In? What to watch, what to eat, and where to shop from home
OR
Heading
Out? What you need to know to stay safe when heading out