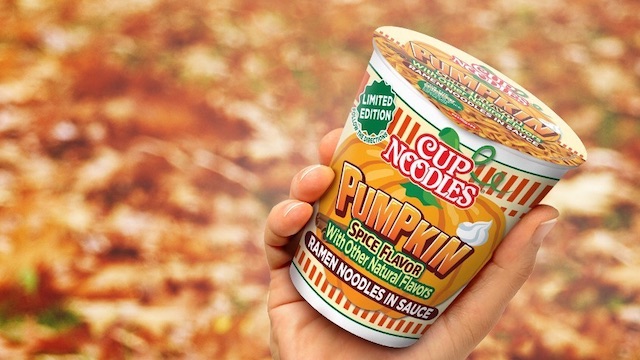 Sooo, Pumpkin Spice Cup Noodles Are a Thing and We Don't Know How to Feel

Would you try this if you saw it on local shelves?

(SPOT.ph) The season of autumn in the U.S. has lately become the season for pumpkin-spice everything, pumpkin spice referring to the blend of spices like cinnamon, nutmeg, ginger, and/or cloves that's popularly used to add depth to pumpkin desserts like pie. And never mind that we technically don't get to experience fall in these parts; we'd be lying if we didn't admit we're suckers for its warming, festive flavor! Aside from the usual baked goods, pumpkin spice is also used for spinoff treats that range from lattes to candies to cereal and even to non-edibles like candles and lip gloss. But perhaps thanks to the crazy year that is 2021, it seems Nissin's famous Cup Noodles wants to join in the the autumn-season fun with their American leg's upcoming Pumpkin Spice Cup Noodles. You heard that right.

Also read: 10 Famous Brands of Instant Noodles Around the World

Nissin's Pumpkin Spice Cup Noodles are... unconventional, to say the least—and here's why:

Now when you think of cup noodles, what likely comes to mind is a savory, umami (and often meaty) flavor profile that totally satisfies any time of day—but the Pumpkin Spice Cup Noodles aren't quite like that. Instead, they're described to be of the saucy rather than soupy sort, with a "special pumpkin seasoning" that melds together sweet, savory, and spiced worlds! Cup Noodles even suggests topping them with whipped cream, "for the quickest, tastiest and most outlandish pumpkin spice in-a-cup experience you never knew you needed!"—uh, we'll pass. But props to them for thinking out of the box! (Er, cup?)

If it's any consolation, Nerdbot does say it's "better than you'd think." Heck, if you squint hard enough you could loosely compare the idea of spiced cup noodles to a curry soup! Either way, this special flavor is being released to mark their 50th anniversary, so it must be real special. The Pumpkin Spice Cup Noodles will be available at Walmart stores in the U.S. in October, so it might just be worth crossing your fingers for it to make its way to our shores as well!

Cup Noodles is an instant-noodle brand that hails from Japan, where it's known as Cup Noodle. Taiwanese-Japanese businessman Momofuku Ando came up with instant noodles in 1958, but by 1971 got another eureka moment as he witnessed people break up the rectangular blocks of instant ramen to be able to fit into cups. Today, Cup Noodles is available in more than 80 countries and comes in different flavors including Beef, Chicken, Seafood, and more.

Nissin Cup Noodles Food News Pumpkin Spice Instant Noodles Nissin Cup Noodles Adventurer Savvy Tpc-000001 Staying In
Your Guide to Thriving in This Strange New World
Staying
In? What to watch, what to eat, and where to shop from home
OR
Heading
Out? What you need to know to stay safe when heading out