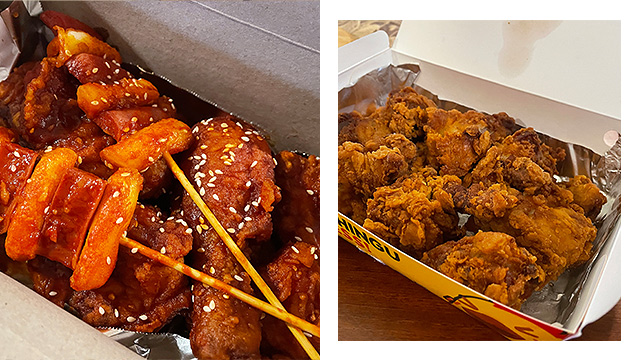 There's a new meaning to KFC.

(SPOT.ph) Fried chicken is admittedly a very comforting dish. Our childhoods consisted of enjoying it at every single birthday party (not just yours, but literally everyone’s) and fighting over the last piece of chicken skin. As we grew up, fried chicken wasn’t just a birthday treat, it became a staple during casual hangouts with friends, game nights, or simply when we’re craving something greasy.

There are a lot of ways to cook fried chicken and in the past few years, a popular form emerged in the way of the Korean style. It is often referred to as chimaek since Korean fried chicken is best paired with a cold bottle of maekju or beer.

For the best KFC (Korean fried chicken) in town, we looked at accessibility, delivery options, flavor, tenderness, skin to meat ratio, crunch, and of course, whether they offer half and half (two flavors in one!).

These are the top 10 Korean fried chicken shops in Metro Manila:

Wonder Chicken’s Mix and Match (P590) gives you two flavors in one go. Their Soy Garlic might be a tad too salty for someone that does not like salty food but is something that can be overlooked given that the chicken retains its crunch despite being saturated in the soy garlic sauce. On the other hand, their Yangnyeon chicken is similar to chicken doused with a sweet chili sauce instead of the traditional spiciness you’d get with gochujang. You also get bang for your buck as the portions are a lot (think five to six pieces per flavor).

Wonder Chicken is available for delivery via GrabFood, FoodPanda, and Pickaroo.

Let’s admit it, no chicken spot is the same. Some might be right up your alley with the perfect skin-to-meat ratio while some pack in the crunch with tons of breading instead. In the case of Samsam Chicken’s Half/Half Boneless Chickin (P264), there was more skin than chicken which tends to take points off for the author but in this case, is being offset by the fact that their Yangnyeom flavor was just the right amount of spicy, it doesn’t burn your nose and it’s a good starting point for those keen to try spicy Korean fare. Their Soy Chicken flavor was more on the sweeter side than salty. The price point of P264 for a medium-sized half and half order makes it a good starting point for would-be explorers of Korean fried chicken.

Samsam Chickin is available for delivery via their website and GrabFood.

One of the more accessible chicken shops on this list, Kko Kko serves big portions of fried chicken—we’re talking “as big as the one you eat at home” levels. The Original (P428) is very reminiscent of your typical Pinoy-style fried chicken–the golden and crunchy kind that your grandmother used to feed you–and provides a very satisfying crunch. The Yangyeon (P448) on the other hand is not for the faint of heart. It has a distinct spicy scent that is typical of Korean dishes, the kind that would make your nose burn if you’re not used to it. However, it’s not the end of the world—upon biting into the spicy chicken, you’d be surprised to also find a hint of sweetness mixed together which balances the spice that the gochujang brings in. Kko Kko does not offer half and half portions of the chicken.

Despite being served in separate containers, Chicken Chingu does offer half and half! The aptly named Party (P568) bundle gives you 14 pieces of crisp and juicy boneless chicken thighs. Their Original flavor is nicely seasoned with just a hint of saltiness while their Spicy Yangnyeon 1 (yep, you’ve read that right, it has a spice level!) is perfect for beginners with its sweet and spice flavor profile. The chicken also has just the right amount of breading to make it slightly crunch without overpowering the skin-to-meat ratio making it just the right size for you to finish it in one-to-two bites.

You’ll definitely want to do a mukbang with this chicken joint! Their Half and Half Boneless Fried Chicken (P540) gives you 14 humongous cuts of chicken thigh. Their Original flavor is lightly breaded so that it does not scratch your palate as you bite into your steaming hot chicken. It also has a nice taste that’s not too salty nor is it underseasoned. Their take on the OG Korean flavor, Yangnyeom is one that starts off sweet but slowly builds into spice the more you take a bite. Don’t worry though, if you can’t handle the spice, you can just easily take a sip of milk or chug a whole glass of beer that we know is right beside you.

Yum Yum’s Boneless Half and Half Chicken (P585) was more skin than meat. However, that does not discount its ranking in this list. Similar to another chicken spot ranked on this list (we’re talking about 24 Chicken), their Yangnyeom chicken has just the right amount of spice, something that half of the population (those that are not into death-defying spice levels) would appreciate. But if you’re the type to want spice in your life, this is still the perfect order for you as it’s the kind that slowly builds but does not overwhelm your taste buds. Their Fried Chicken, on the other hand, is a pretty good dupe (if such a term exists in the food world) for Jolibee’s fried chicken. It has a great crunch and even tastes better when paired with the pepper-y gravy it comes with.

Yum Yum Chicken is available on GrabFood and FoodPanda.

Like Awkwafina’s popular line in the movie Crazy Rich Asians, this chicken joint certainly deserves a “bok bok b*tch” moment. While the joint doesn’t offer a half and half like some of the places on this list, it’s pretty much forgivable given that they offer individual half orders. We suggest going with their Original (P289) flavor which is one of the closest in terms of texture and flavor to chicken you can get in Seoul, South Korea. Meanwhile, BOK’s version of Yangyeun (P309) has a tolerable and mild spice that can easily be controlled by how much minced garlic you add to your chicken.

If there’s such a thing as a chicken gang, well, sign us up! Gang Gang Chicken is one of those chicken spots that will surprise you. Their Half and Half (P598) is on the pricier side but we promise it’s worth it. Get yourself the Original which is nicely seasoned (and boneless!). It has the right amount of breading that it also does not scratch your palate and the skin is not overly crispy, just the right amount. If it’s a spice world that you want, shoot your shot with their Gangnyeon, their take on the basic spicy Korean fried chicken that at first sniff would make you wish you were never born. Yep, it smells that spicy. But if you do decide to take the plunge, you’d be surprised that scents can be as deceiving as this chicken is actually tolerable for those that get weak in the knees whenever spicy food is mentioned.

Gang Gang Chicken is available on GrabFood and FoodPanda.

If you haven’t tried 24 Chicken then you’ve probably missed out on half of your life already. We’ve talked about this small chick turned big-time bird before and we still stand by our statement that it’s still one of the tastier chicken places in Manila. Grab yourself an order of the Original (starts at P215) with its crunchy and well-seasoned skin. If you’re feeling a bit braver, you might want to give one of their bestsellers a try. The Yangnyeom with Garlic (starts at P230) has a good balance of savory chicken and a slight tinge of heat that isn’t too intense but can be built upon with additional servings of minced garlic or by swiping your chicken in additional sauce at the bottom of the container.

Despite not serving half and half portions, Yang Gang takes the number one spot as the best Korean fried chicken place in the Metro. Reward yourself after a long work week with their OG (starts at P249), an unglazed chicken with dry rub seasoning that brings forth a truly umami-rich profile. Its crunch level is also one for the books given that it stays crunchy despite you leaving your chicken out in the open for a couple of hours. Yang Gang’s take on Yangnyeom (starts at P249) should not be taken for granted either. This glazed piece of chicken is smothered in the spicy gochujang sauce yet it maintains a mild spice level that most would come to appreciate. You wouldn’t want spicy food to be overkill after all.

Yang Gang is available on GrabFood and the MadEats website.