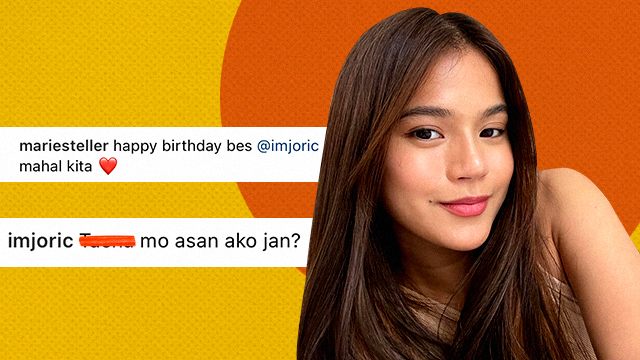 Her friend's response made it even better.

Maris Racal once again proves that she's one of the most relatable stars on social media. The singer-songwriter and actress posted a birthday greeting for her friend that had everyone laughing in the comments section.

On July 14, Racal posted a birthday greeting for her friend, Joric Pecson (@imjoric), on her Instagram feed, with a short but sweet caption saying, "Happy birthday bes @imjoric. Mahal kita." She also tagged Pecson in the photo. The catch though? Her friend wasn't in the photos she posted at all! It was just two selfies of Racal herself. Talk about self love!

Maris Racal posted a sweet birthday greeting for her friend, but there was one thing missing:

Those who saw the post couldn't help but leave laughing remarks under her legendary birthday greeting. Some even joined in and left funny comments—"Birthday mo lang, account niya 'to,"remarked one commenter. But the best comment would probably go to the birthday celebrant himself, who straight up asked where he was in the photo.

Tbh, we've all been Racal to a friend in some way, particularly when we don't have any decent photos with them on their birthday—though most of us would probably resort to embarassing snapshots over selfies. On the other hand, mutual friend and fellow celebrity Sue Ramirez did get to post a photo of herself with Joric to greet him on his birthday. The thing is, Pecson had to send Ramirez the photo so she could post her birthday greeting for him. Hey, at least Ramirez made the effort to ask!

This story originally appeared on Candymag.com. Minor edits have been made by the SPOT.ph editors.

Hey, Spotters! Check us out on Viber to join our Community and subscribe to our Chatbot

Maris Racal Sue Ramirez Entertainment Instagram Humor Staying In Savvy Adventurer Seasoned Syndication Syn-00291
Your Guide to Thriving in This Strange New World
Staying
In? What to watch, what to eat, and where to shop from home
OR
Heading
Out? What you need to know to stay safe when heading out