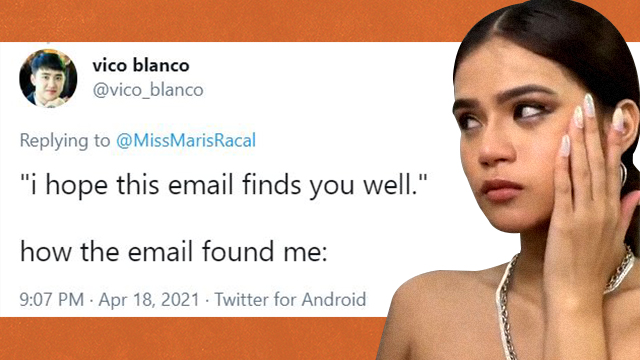 Bow Down: Maris Racal Is the Newest Queen of Internet Reaction Vids

If this isn't us having a mini breakdown while on our laptops.

(SPOT.ph) At just 23 years old, Maris Racal holds several titles. She is an actress singer, songwriter, vlogger—and now, the all-around social media queen can add the title of top-quality meme content creator to her belt. She dropped a super short clip of her typing away on a laptop to Twitter on April 18. Something about her going through what is clearly some major character development in just 16 seconds hit one heck of a chord. The video has 1.2 million views and nearly 10,000 quote tweets as of writing.

Did you feel that? Because we totally felt that. Your girl was going through a lot. And you just witnessed the birth of a meme. Welcome to the 21st century, folks.

Racal first posted the clip to Twitter sans context at around 8 p.m. and then reposted at 9 p.m. with a caption about Rosé, a contestant on Season 13 of RuPaul's Drag Race. "If Rosé won't win," she wrote in all capital letters so you know she means business.

The OG post has clearly won the Internet meme game with folks relating hard. Most of us have been sitting on our laptops for a year now—and we're the lucky ones—so a mini-breakdown while still typing away has become a pretty common experience. A five-minute cry sounds like a good idea, especially when you come back from it with a vengeance a la Maris Racal.

Racal first broke the one million-mark for views on Twitter in June 2019 when she posted a clip of her walking arm in arm with fellow actors Sue Ramirez and Loisa Andailo. That power walk also became prime reaction-video content, with 14.2 million views as of writing.

She followed that up with another viral clip in June 2020—similar to the laptop one now! Though she amped up the sass in the OG. Think of that mood you get when responding to nasty comments online.

The 2020 version has around 5.6 million views as of writing and we think the newer one will soon catch up. People have been mining it as the ultimate reaction vid. From online schooling to WFH experiences, Racal is all of us just powering through. Check out the most hilarious ones below.

UPDATED (April 20, 2021): An earlier version of this story cited Rosé of BLACKPINK as possible context for Maris Racal's Twitter caption.

Adventurer Savvy Humor Memes Maris Racal Twitter Staying In
Your Guide to Thriving in This Strange New World
Staying
In? What to watch, what to eat, and where to shop from home
OR
Heading
Out? What you need to know to stay safe when heading out